Cooper and Packrat Are Launched!

I was humbled and amazed by the number of people who showed up for Cooper and Packrat’s launch.  As I told the crowd, I really thought we’d have 20 or 30, not counting David’s parents and my parents. 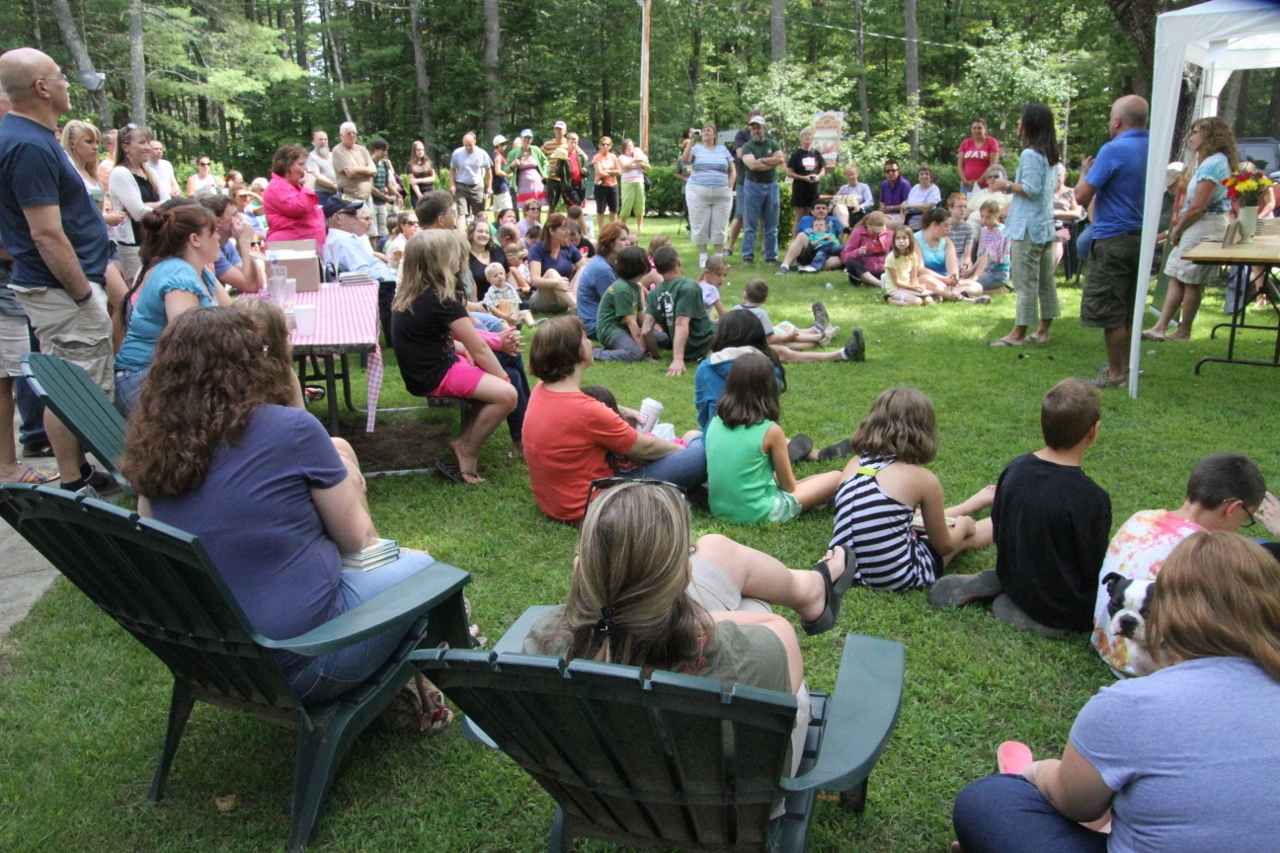 It seems I underestimated by just a little bit.

I never would have imagined I could fit 130+ on my front lawn!  Teaching colleagues, campers, friends, writing colleagues, wildlife lovers, and of course, family.

I was grateful to have each and every one of you there!

Carl DiRocco and his family camped with us over the weekend leading up to the launch.  I really enjoyed meeting him, Gina and the boys in person.

On Sunday, he and Melissa Kim arrived at the launch , just as some early launch-goers gathered to make a toast  before the big event  . . . 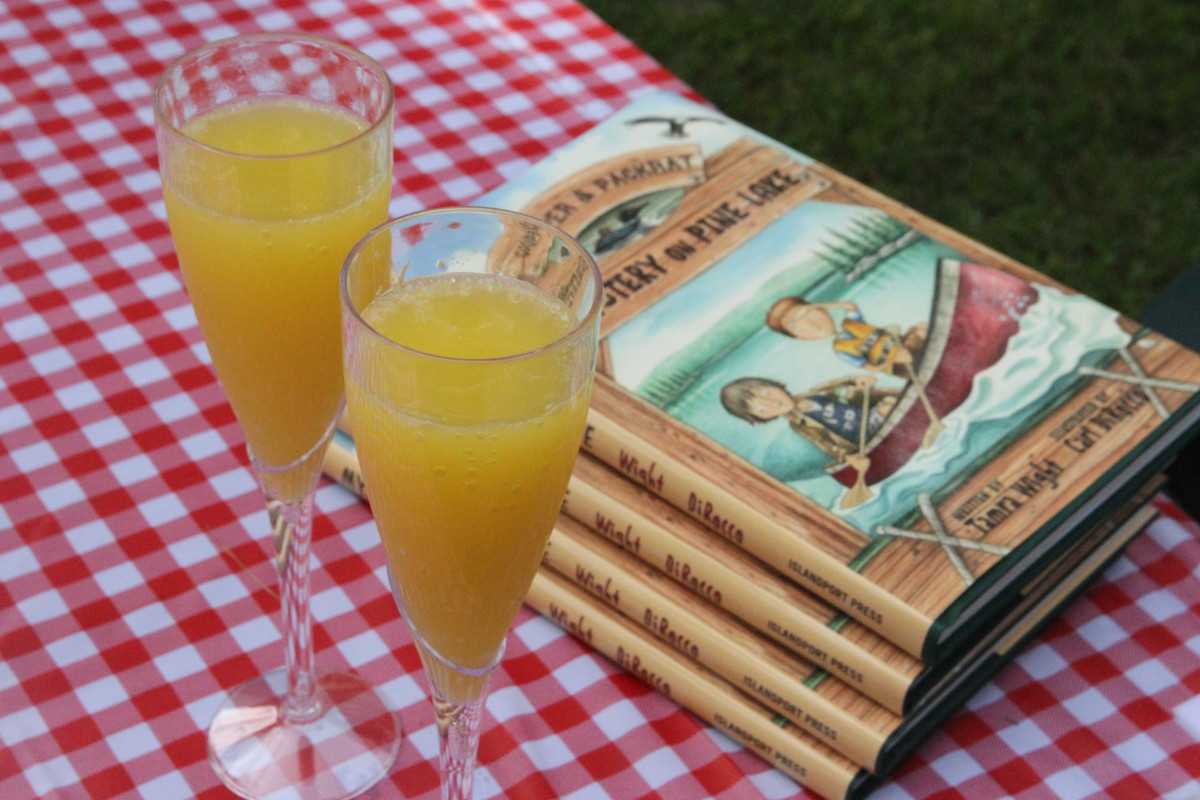 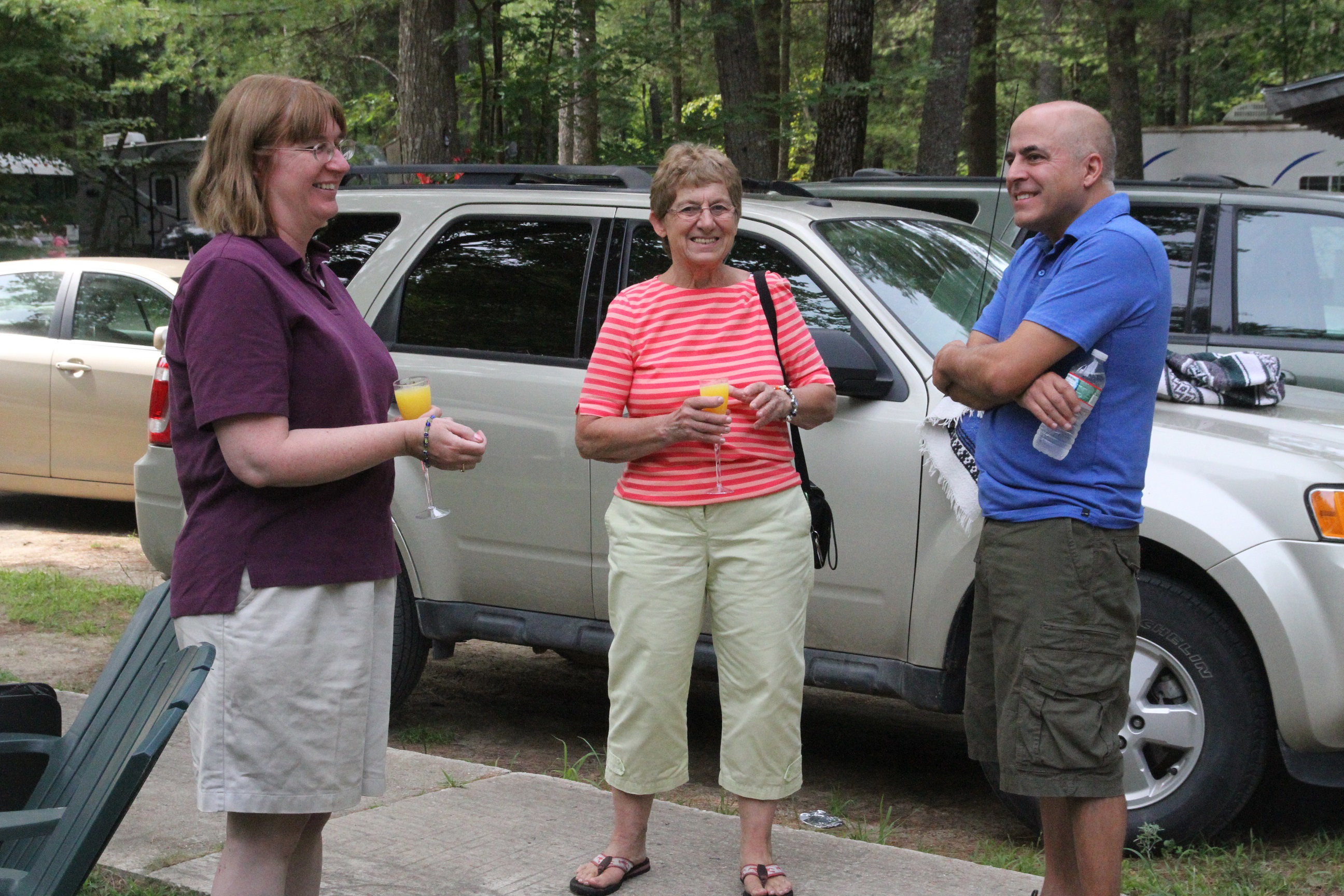 A huge thank you to my friend and recreation director extraordinaire,  Debbie Letourneau , for organizing it! Just what I needed . . .

All too soon it was to time for Melissa to get the show rolling. 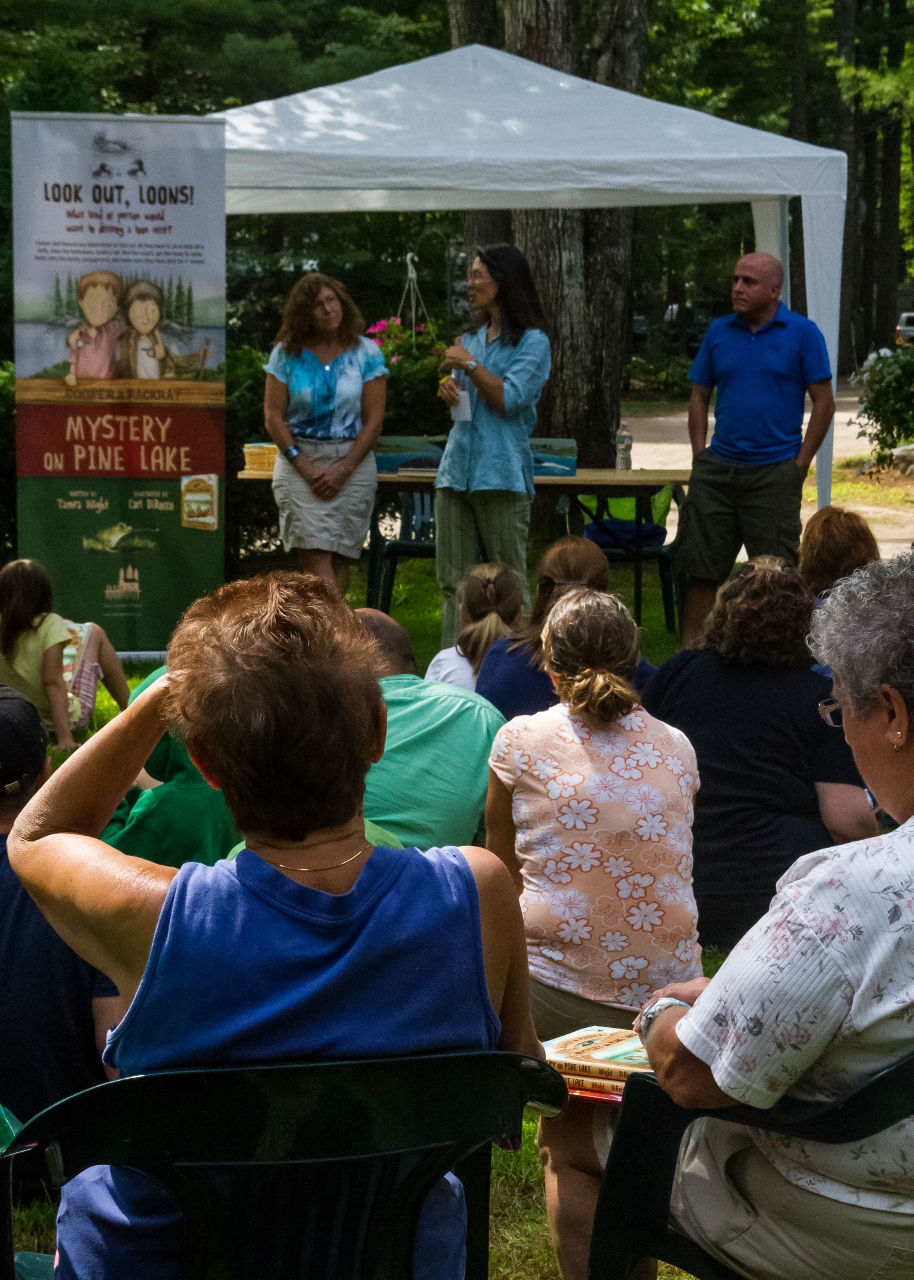 I was a nervous wreck . . . shaking in my boots . . . well, flip flops.  But Melissa began with her reasons for choosing Cooper and Packrat.  Then she went on to announce it had been chosen by the Junior Library Guild!  We were going into a second printing!

When it was my turn to speak I remembered my daughter’s words of wisdom: “Don’t cry!”

I came close, as I glanced at my husband in the beginning.  But I managed to blink the tears back.

Shannon, the teacher in who’s room I teach, knows how much I enjoy reading out loud.  She predicted that once I was a couple paragraphs in, that love would overtake the nervousness of having so many people I know and love in the audience. 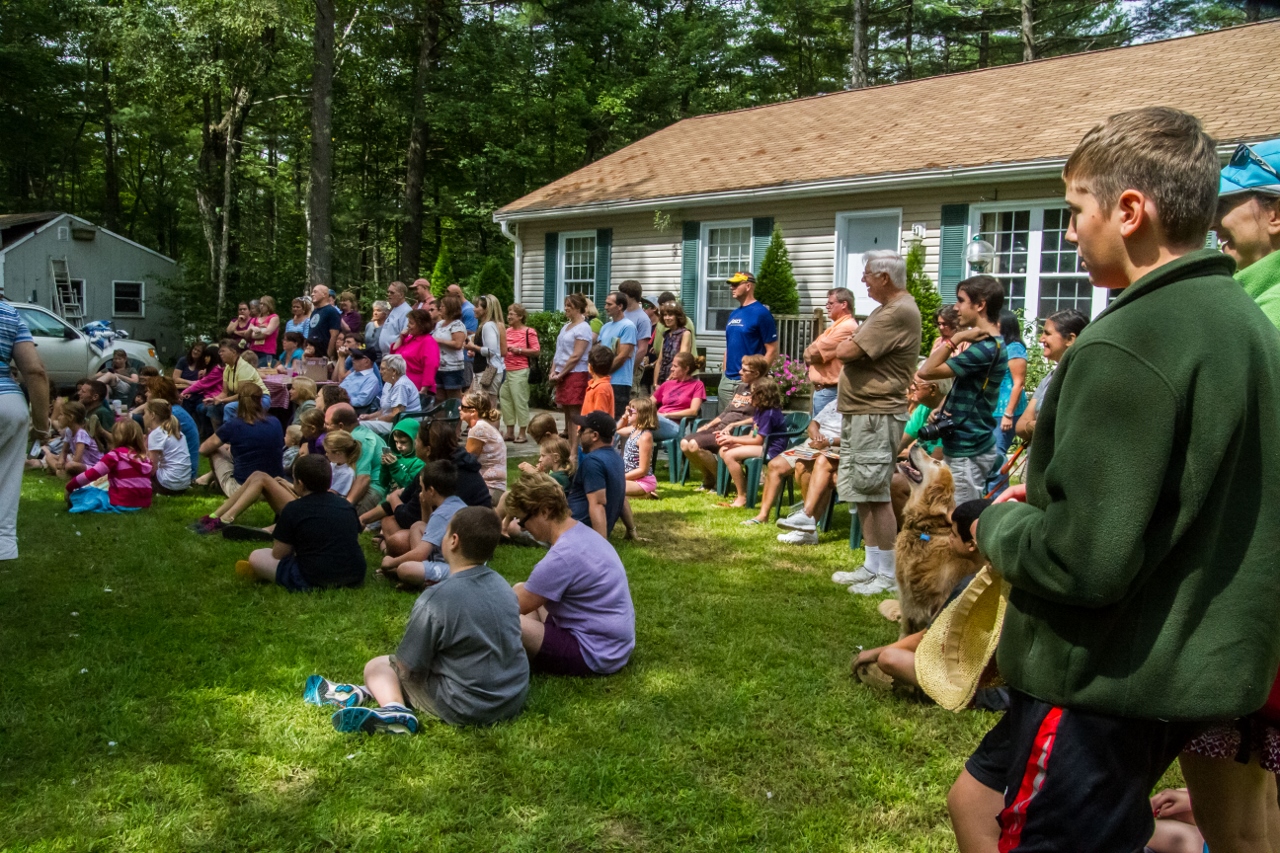 She was absolutely right.

And to see some of them reading along, their lips moving silently . .. . 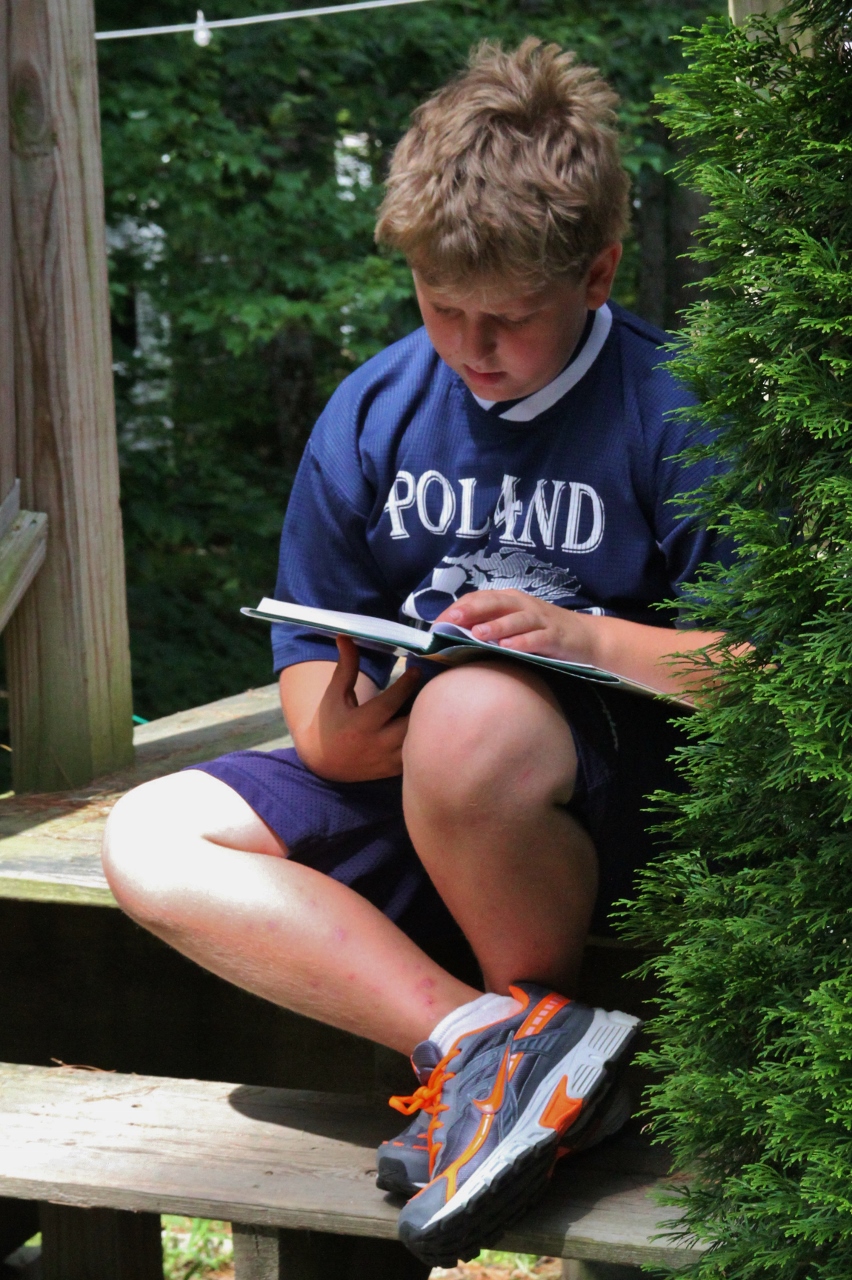 well, the feeling was indescribable, really.

After me, Carl presented in a big way!

He showed everyone how he created the cover and the inspiration he used in its development. 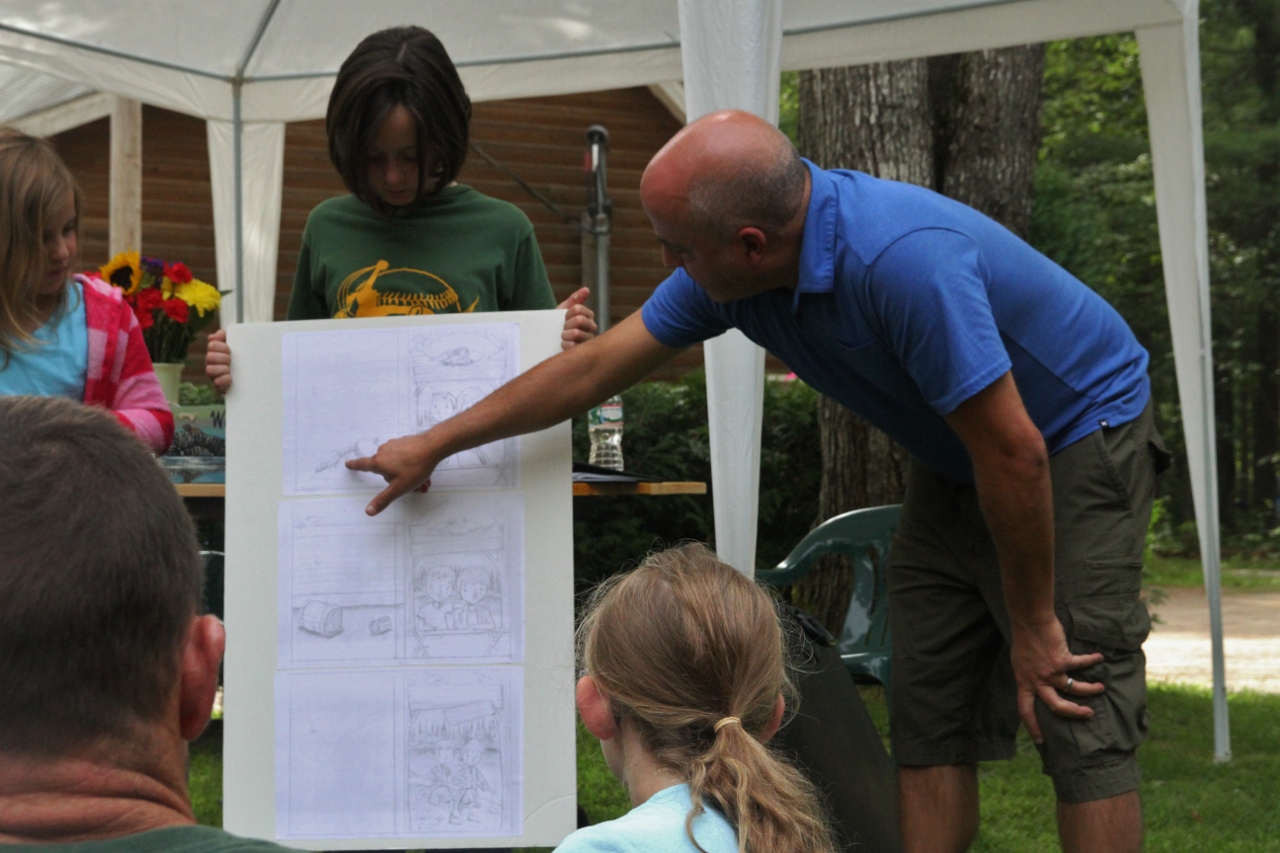 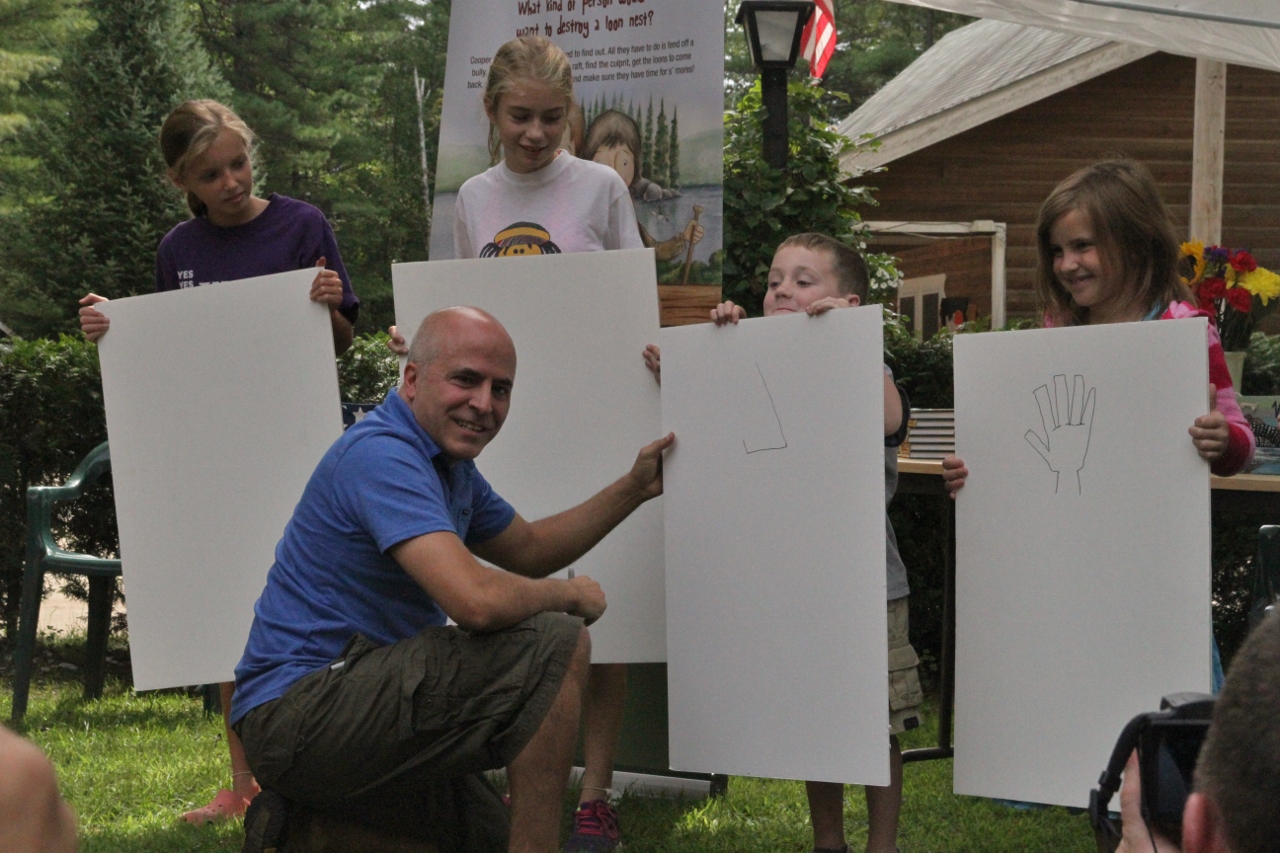 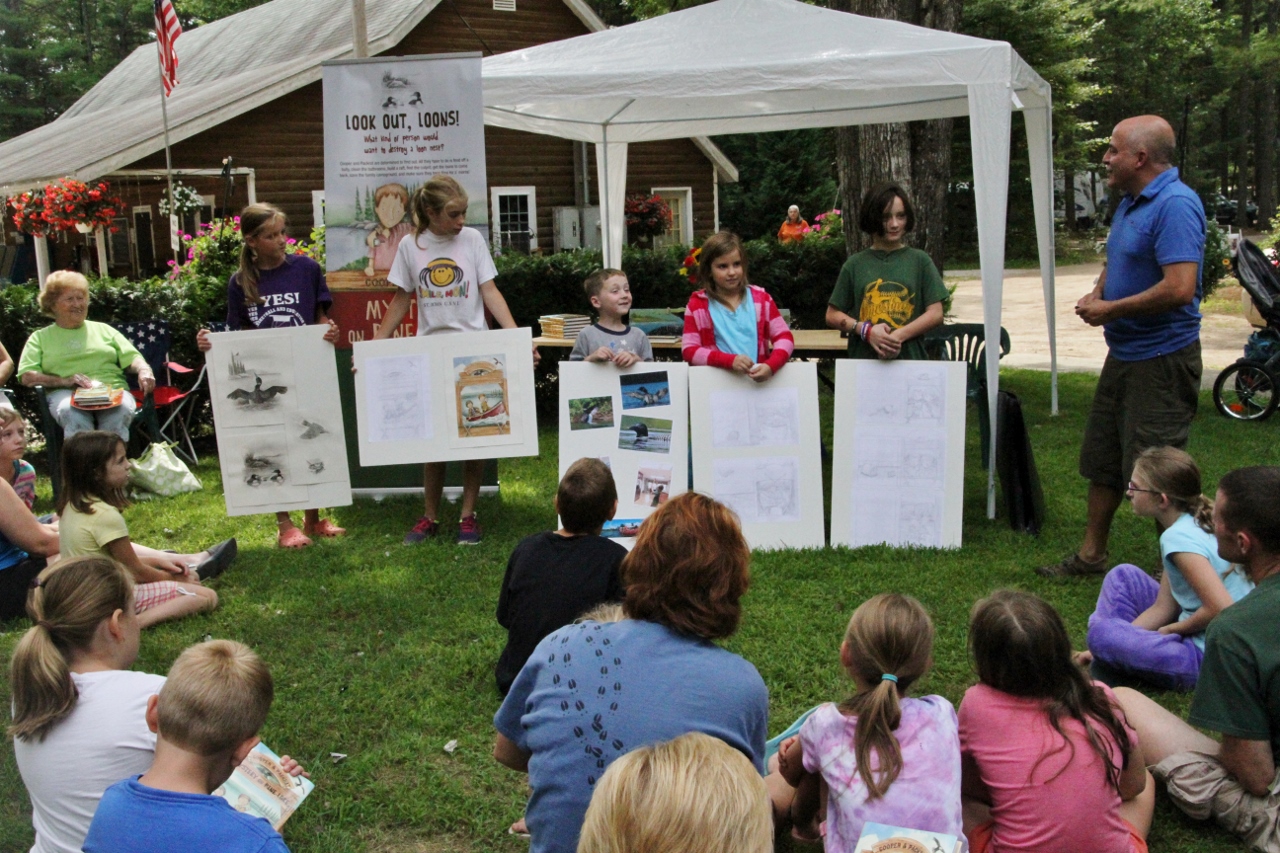 And then it was time for the kids activities!

Carl had brought blank Cooper and Packrat covers for the kids to create their own. 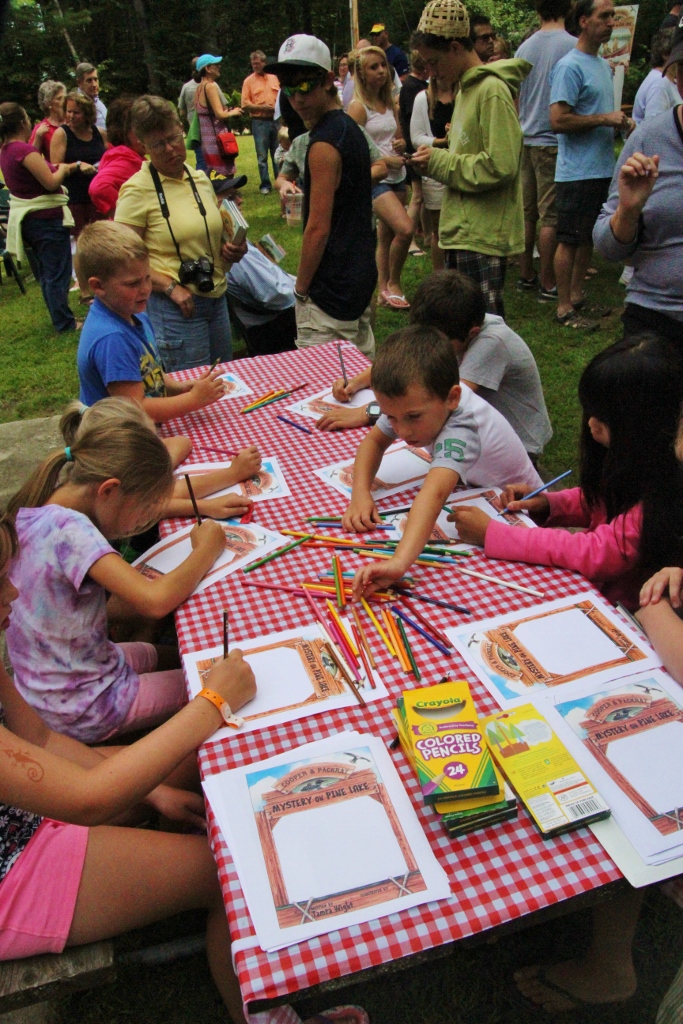 We saw some very talented artists in the crowd!

And my amazing and very giving Poland Spring recreation staff (Debbie, MJ, Maggie and Ron) manned a campfire so the attendees could roast marshmallows for the s’more smorgasbord 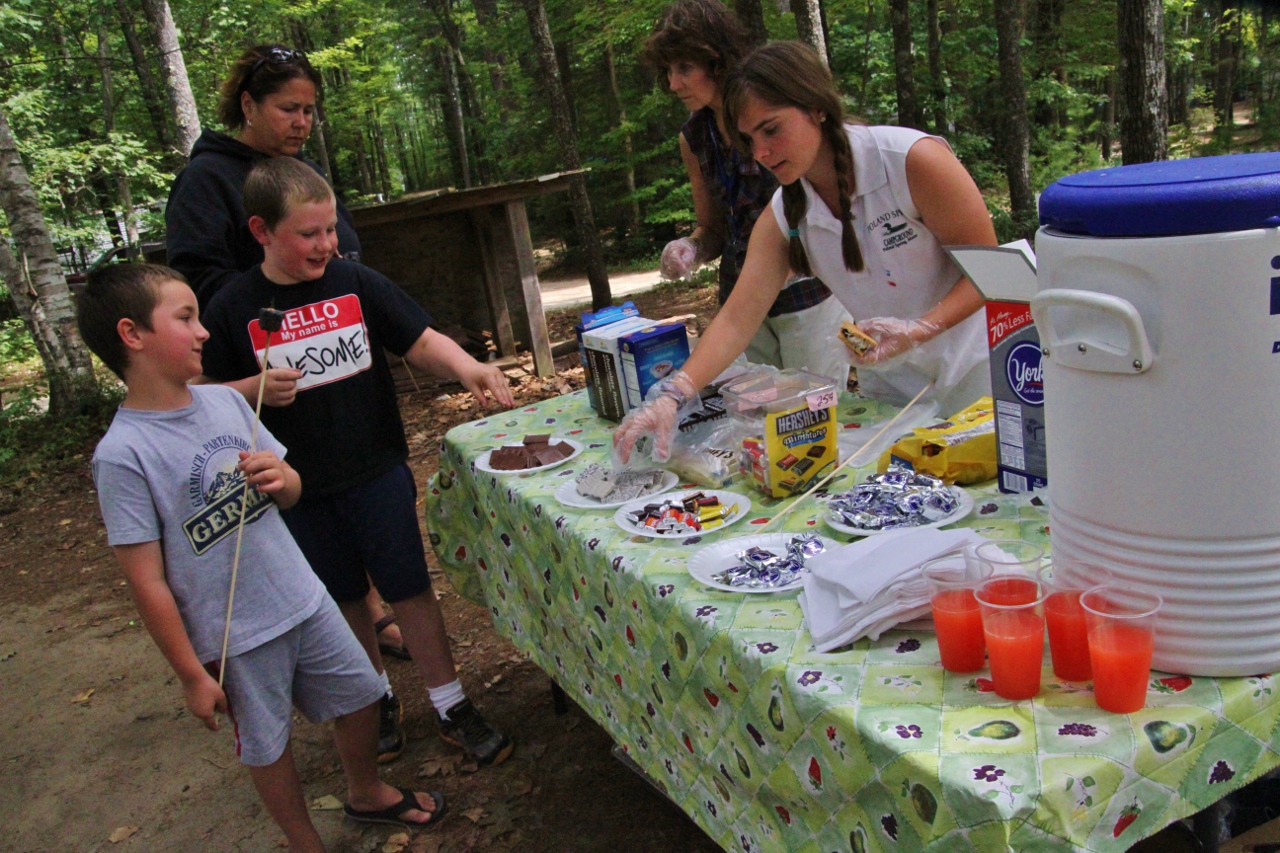 And while that was all happening, Carl and I happily signed books. 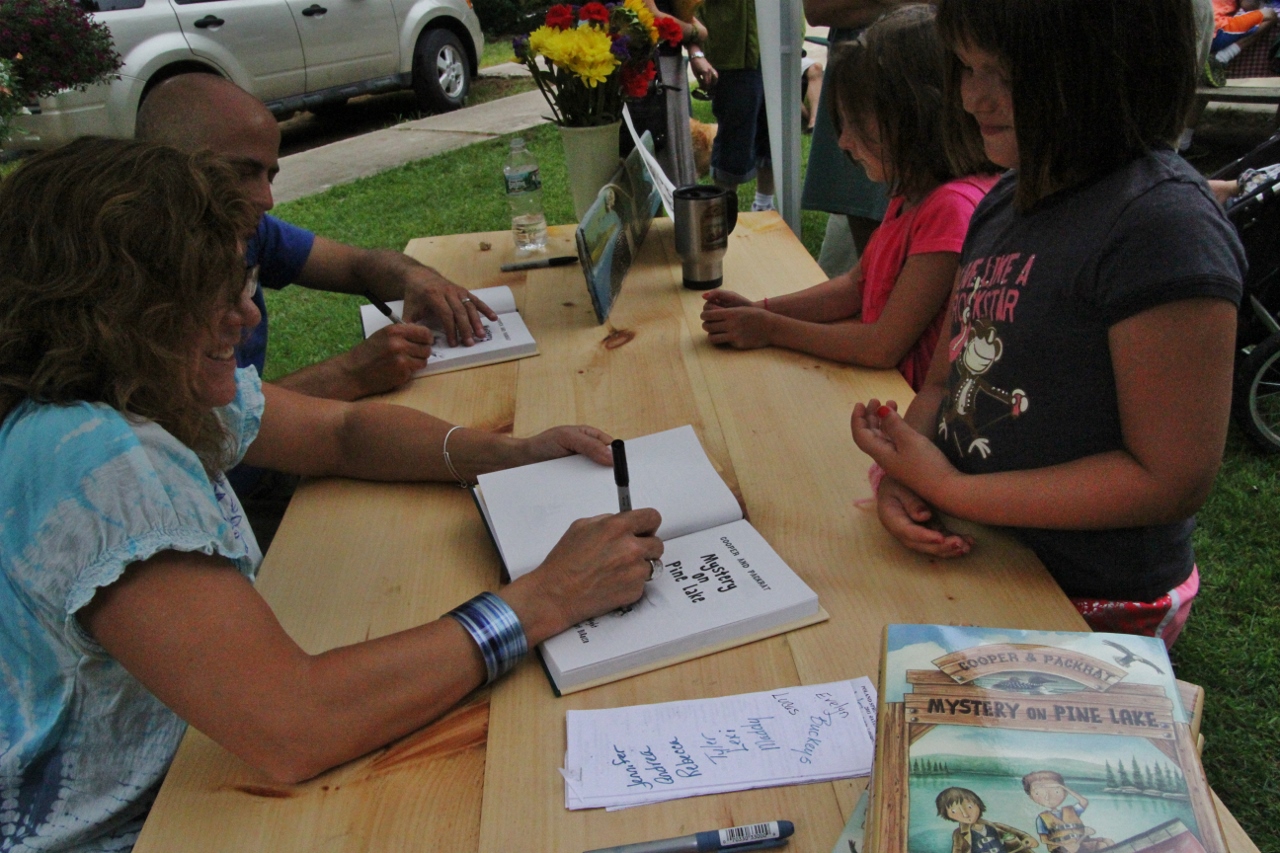 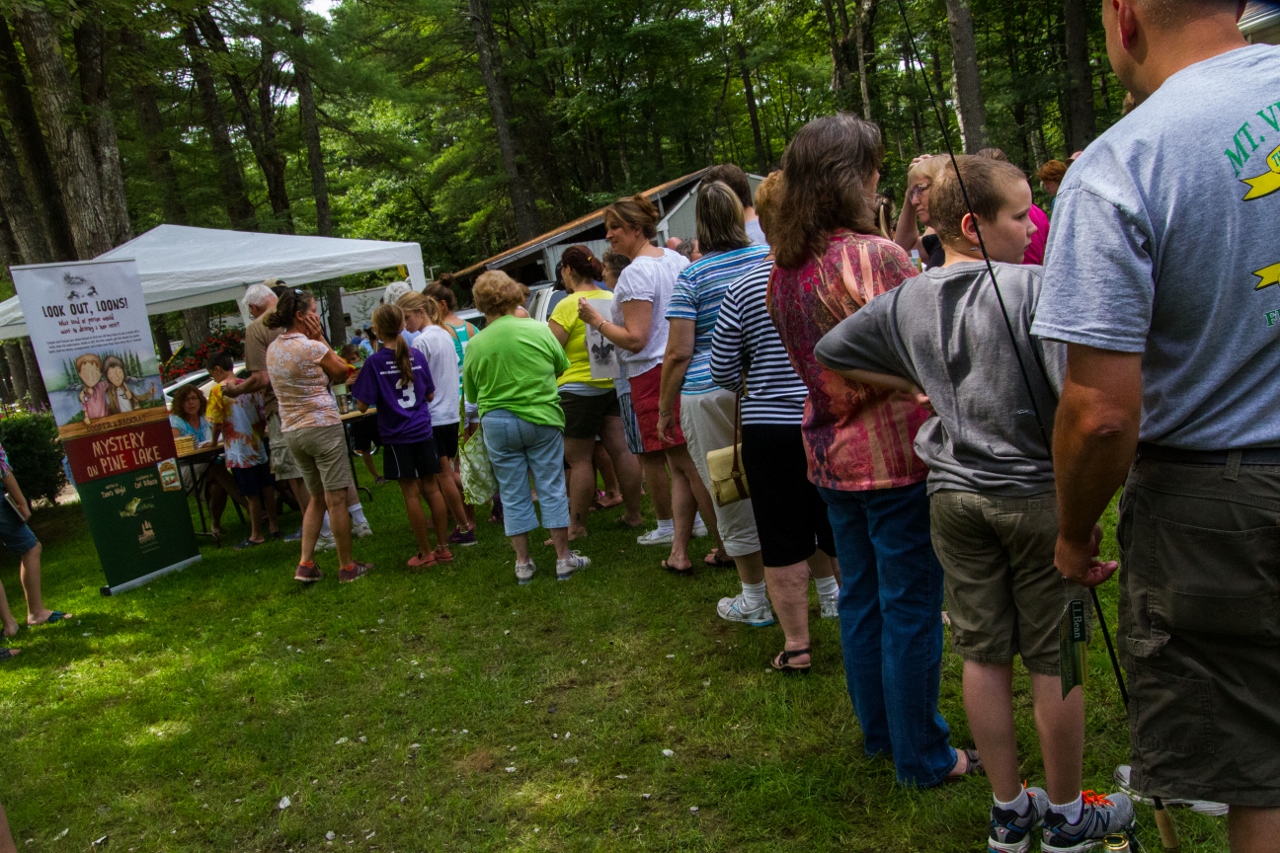 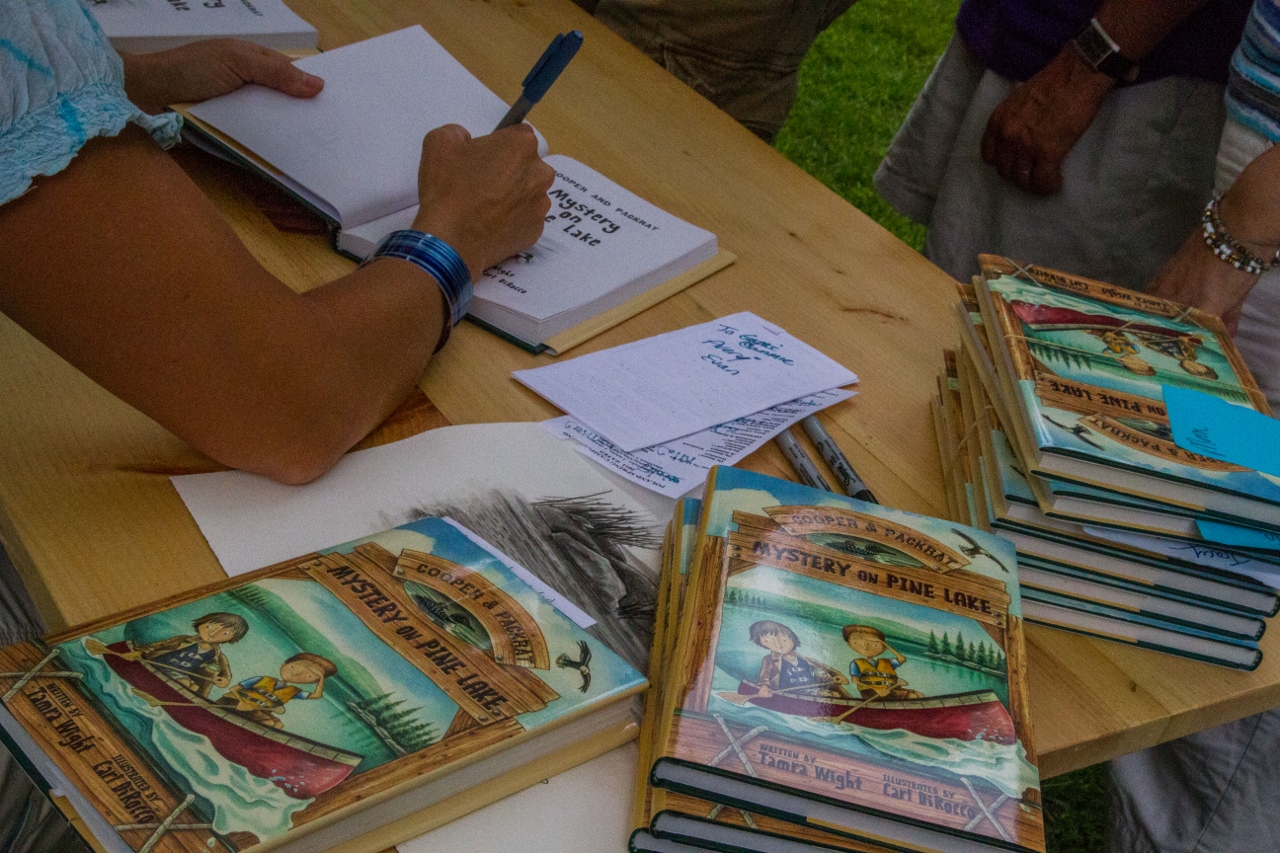 Toward the end of the line, were some very special friends of mine.  Friends who encouraged, kicked me in the butt, and helped edit Cooper and Packrat along the way.

My writing group, the Schmoozers.  So glad you were there!

All in all, I sold every one of the six cases I’d brought home with me two weeks ago. I remember thinking it was probably overkill, but I didn’t want to run out.  Instead, I ended up having to purchase more from Islandport so I’d be sure to have them through the Fall! 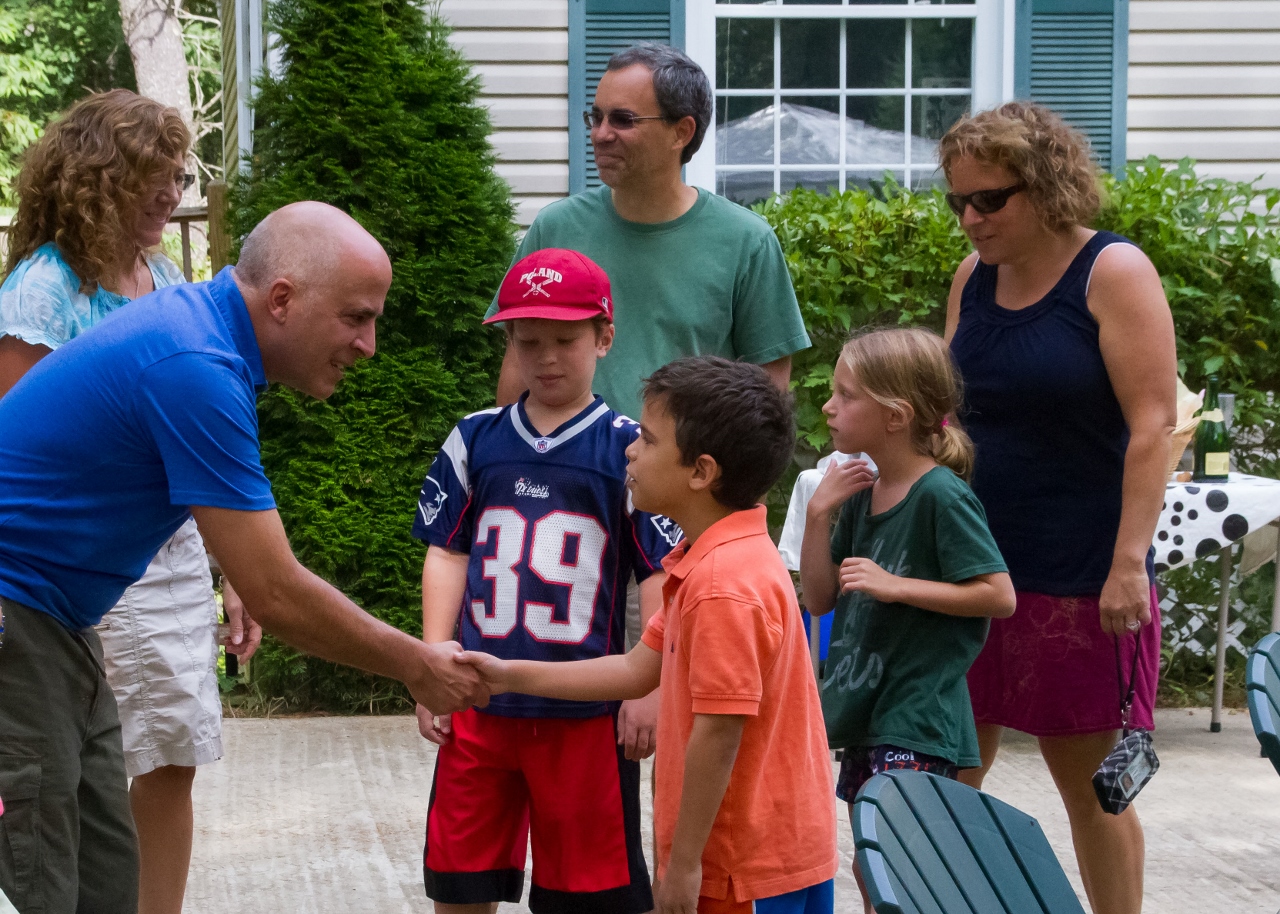 As always, the best part of the day was talking to so many young readers, students and  campers. 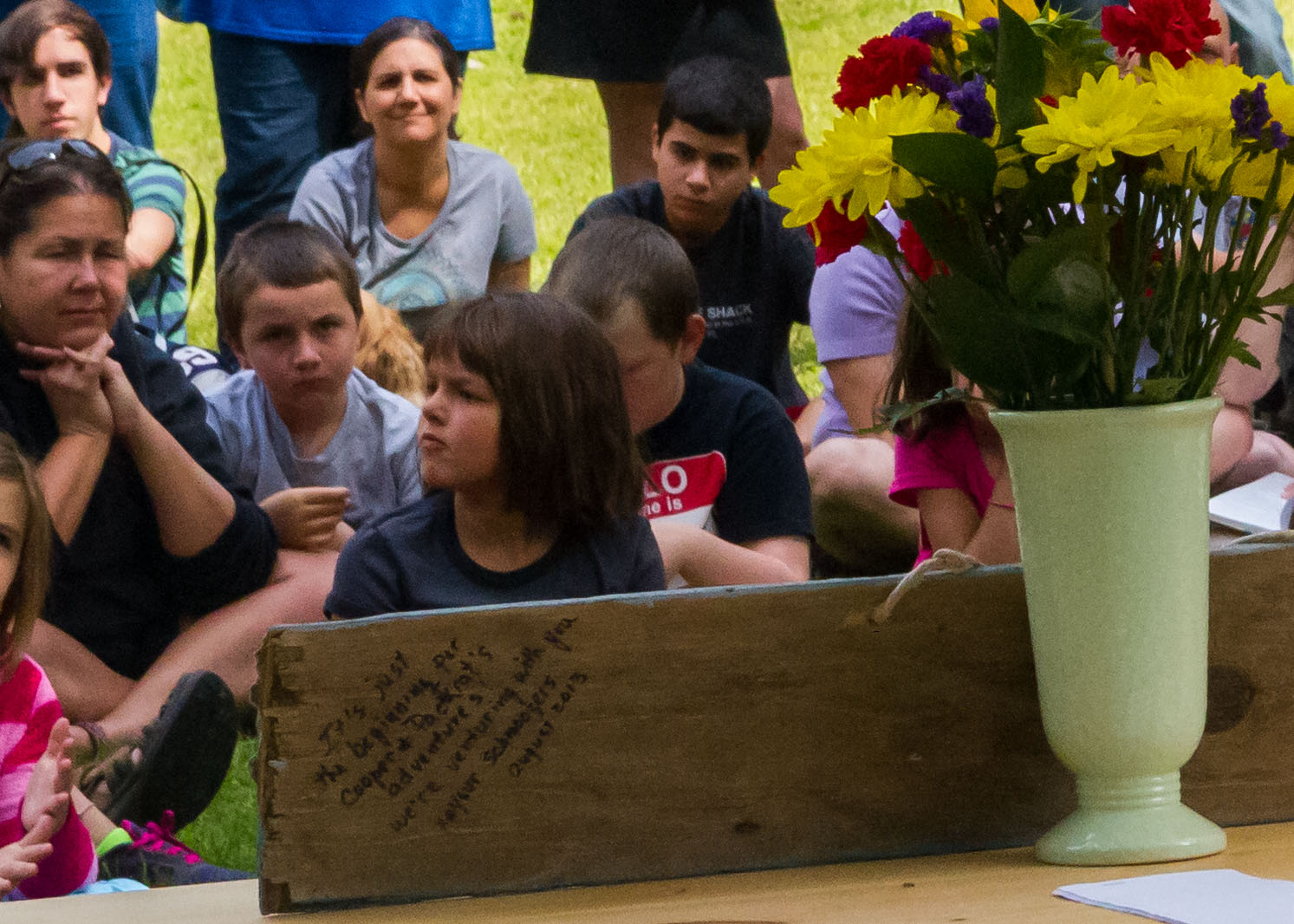 At one point, just before the signing, two young campers who’d spent the weekend chatting with me in the store, approached me:

They were speechless for a second.  “YOU wrote THIS!”