I witnessed the most incredible wildlife-happening Saturday while paddling in from the loon count.

As I made my way past the eagle’s island, I heard a ton of commotion.  The eaglets were both on the nest, screeching at one another.  Wings flapped as they moved around the nest itself and to the branches above it.  I raised my camera to get a better look.  One of the eaglets lifted off the nest, and flew rather clumsily to land on a branch of a nearby tree.

I could tell there was something in his talons . . . 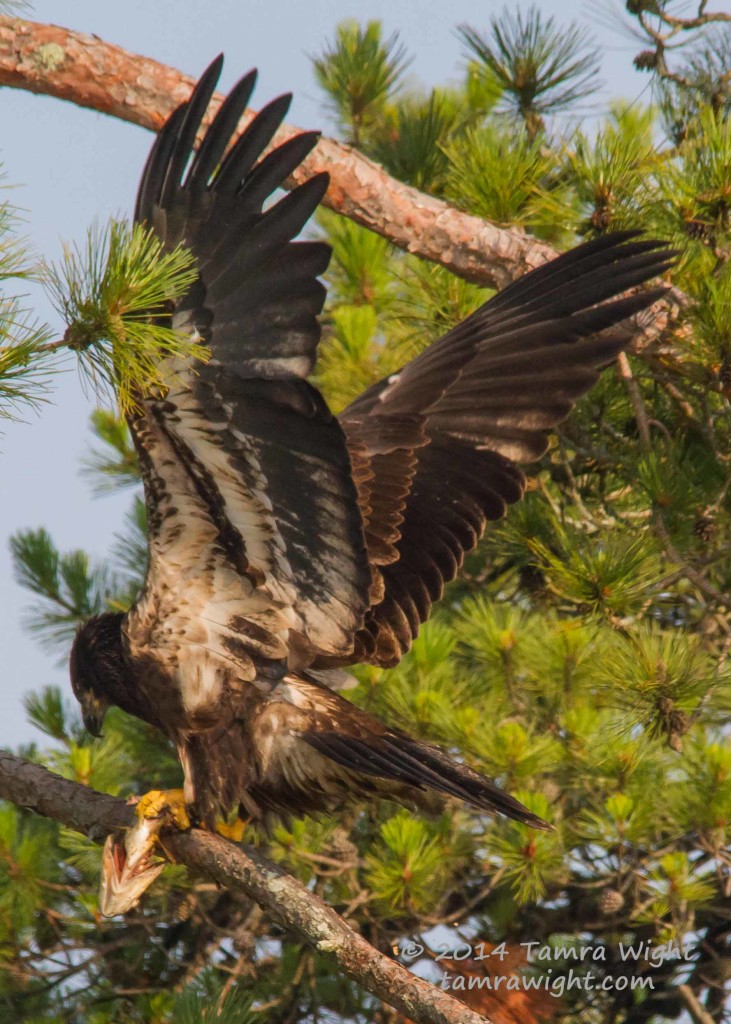 Above and to his right, the sibling eaglet screamed down in frustration from the nest, as this one tried to find his footing without losing the prize. 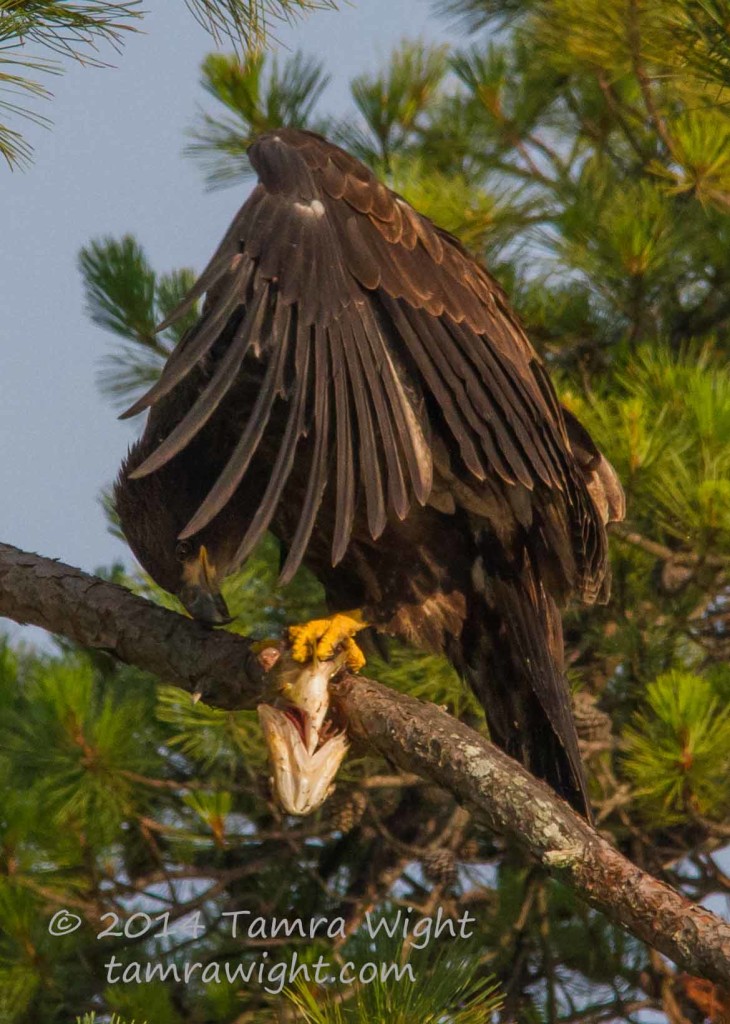 It took a minute, but he finally won the battle of the fish.  I’m guessing that what I missed, was an adult swooping in to drop off breakfast. 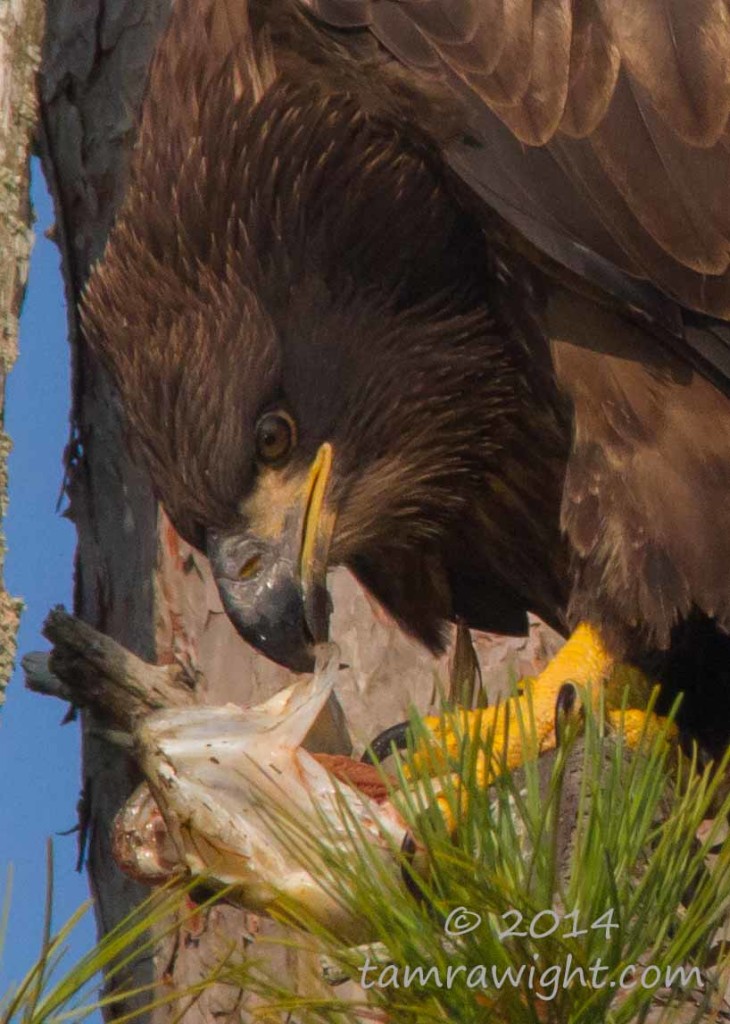 I looked at my watch, and realized I had fifteen minutes to get to shore, lock up my kayak, trudge uphill, and open the store for business.  I’d lowered my camera to do just that, when WHOOSH –

a blur of brown and white buzzed by the eaglet with the fish, causing him to drop his prize.

An osprey?  The adult?

Again, I lifted my camera, using it like binoculars and gasped to see this juvenile had landed on the branch next to the eaglet. 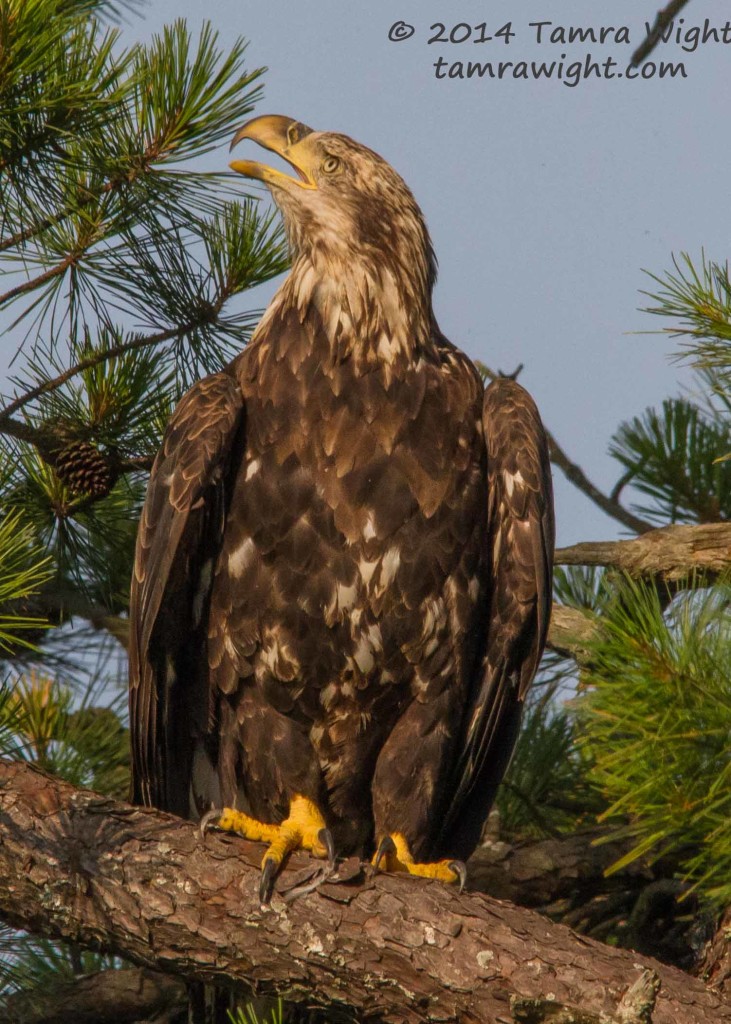 Since it takes almost 5 years for a juvenile to gain their white head and yellow beak, I’m thinking this one is 3 – 4 years old.    Dare I suggest it’s one of the triplets from a couple years ago?  There was that one eaglet who just didn’t seem to want to leave the nest . . . not even after it had collapsed.  We called him “the baby”.

Anyway, all the hullabaloo started all over again.  The eaglet that lost the fish, screamed at the juvenile.  The eaglet in the nest, shrieked down at both of them, while the juvenile let them both have it. 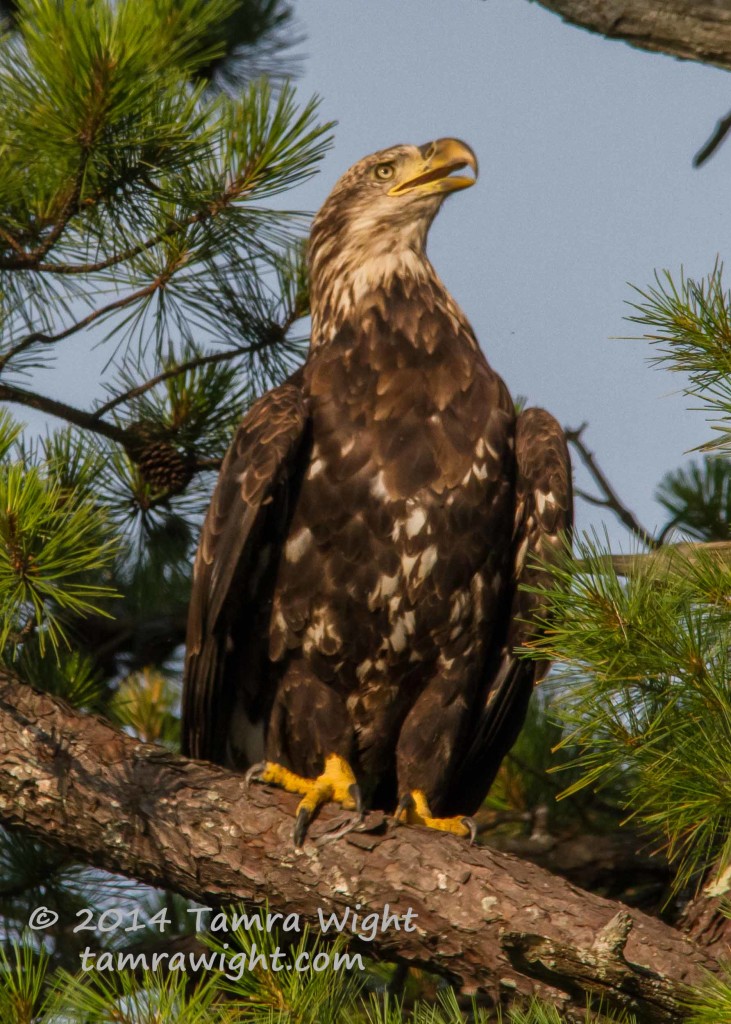 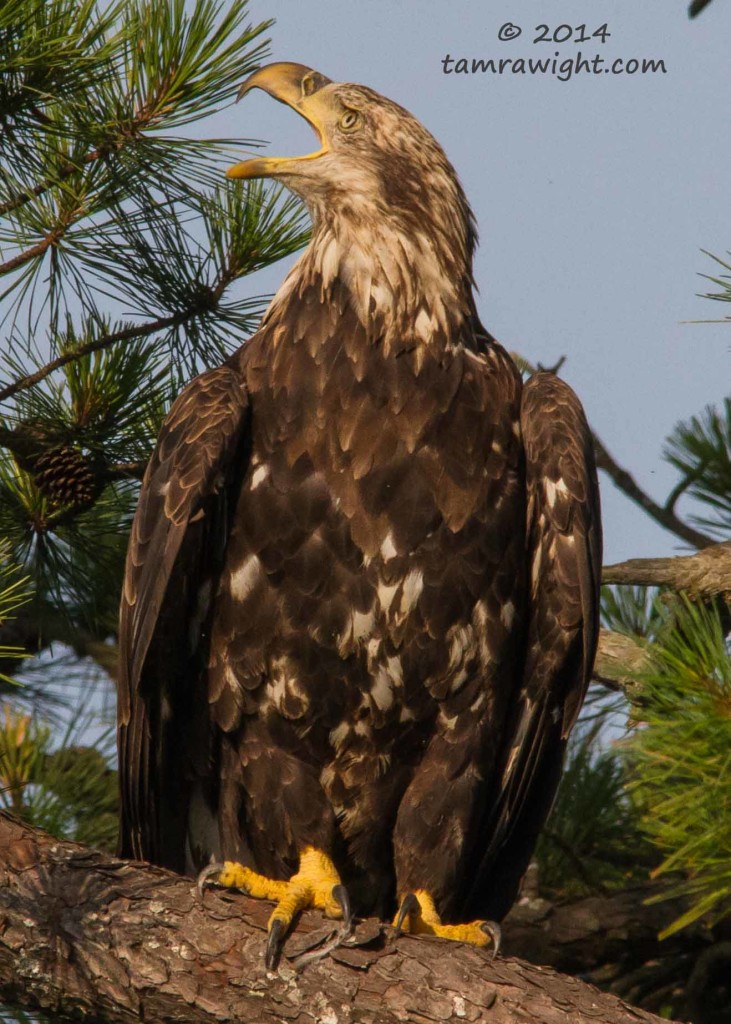 But it was about to get louder.

The adult arrived, buzzing the juvenile, who promptly jumped further into the branches of its tree.

Meanwhile, the adult landed on top the highest point of the island, and hollered down at the juvenile.  More than hollered, she meant business.  It was a call I’d only heard when the osprey buzzed the nest or the heron flew too closely. 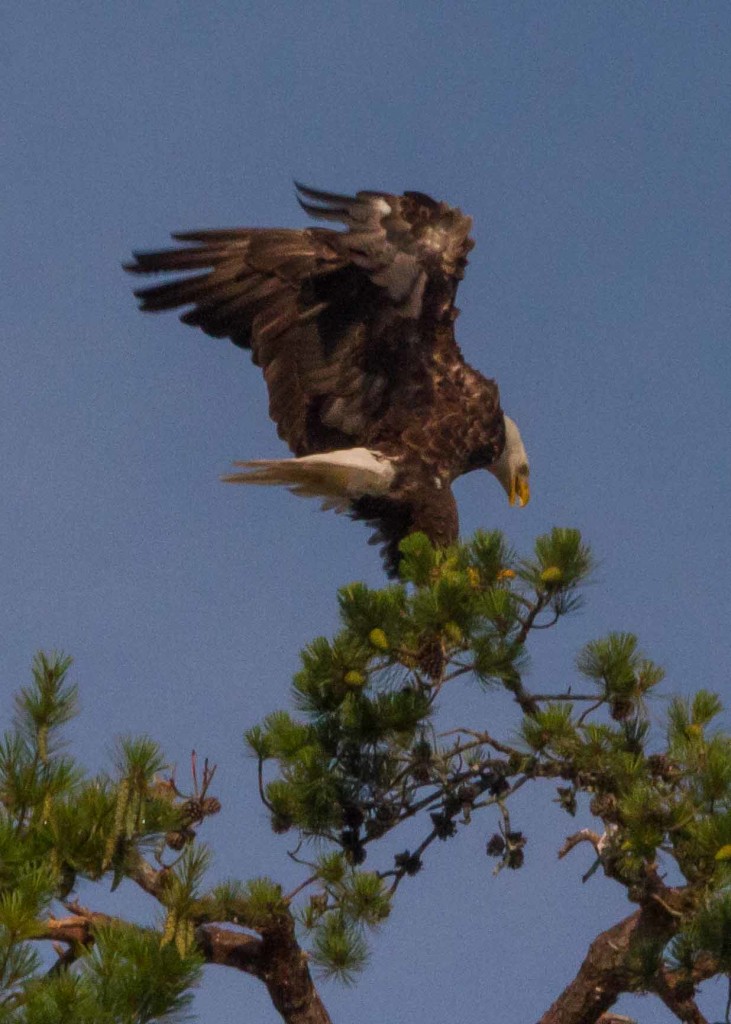 She was not pleased with this newcomer.

Neither were the eaglets who were still making noise of their own.

I just sat in my kayak and chuckled at the whole thing.

Finally, the adult had enough.  She took to the sky. 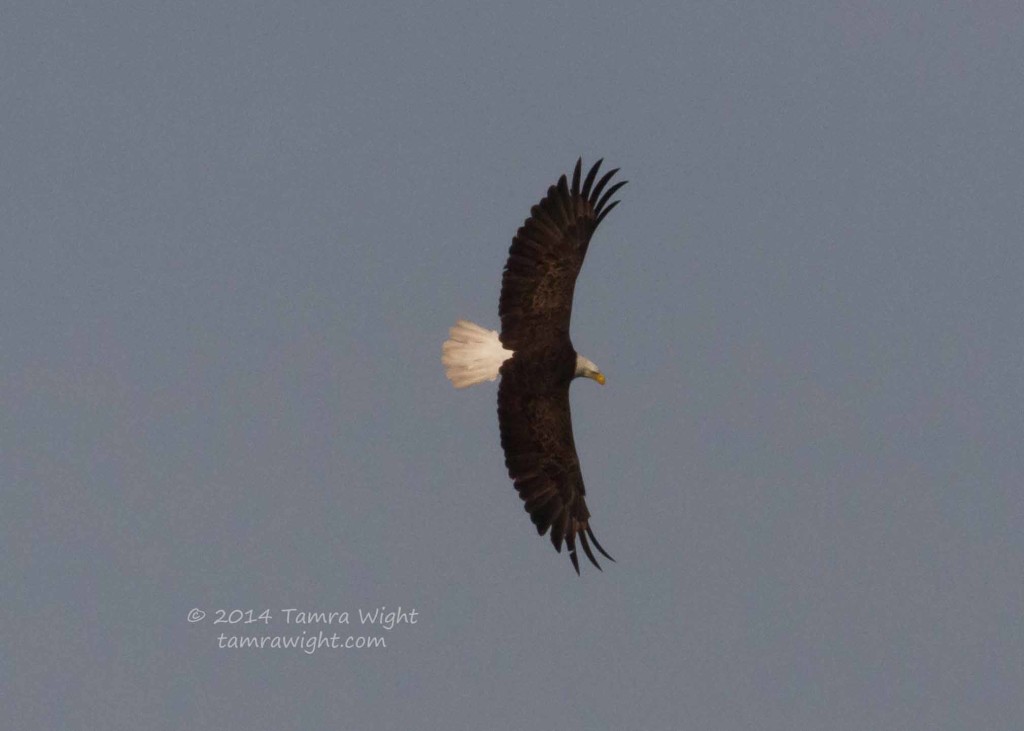 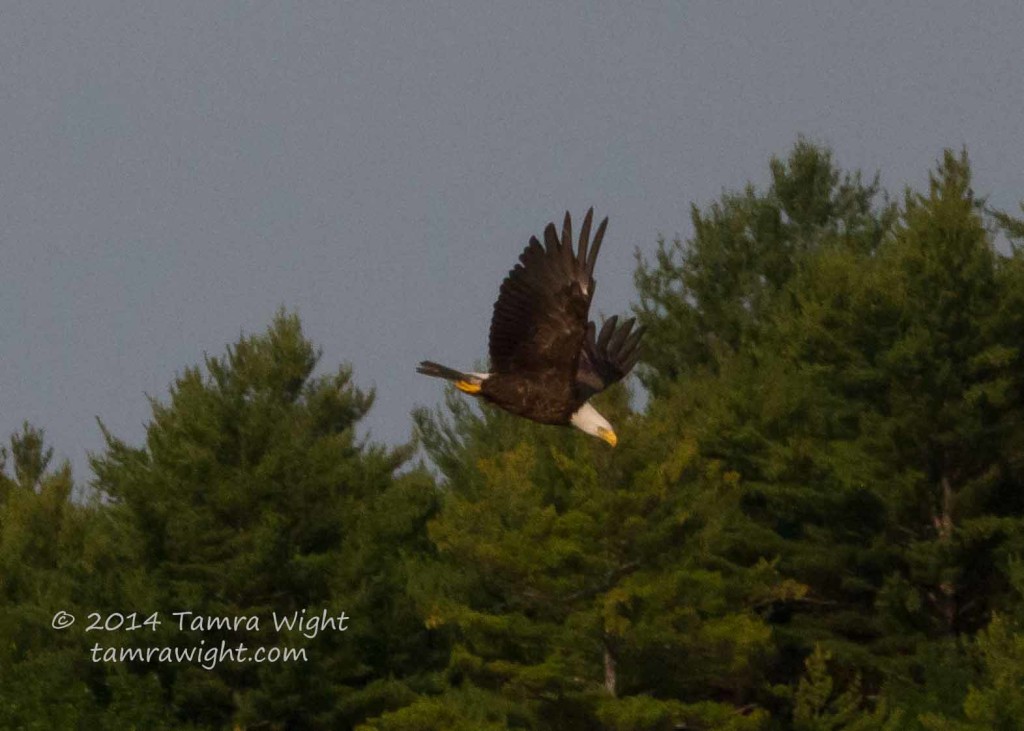 Behind me, the eaglets had gone silent. All I could hear was the adult and the juvenile  screeching, as the older chased  the younger to the other side of the lake . .. 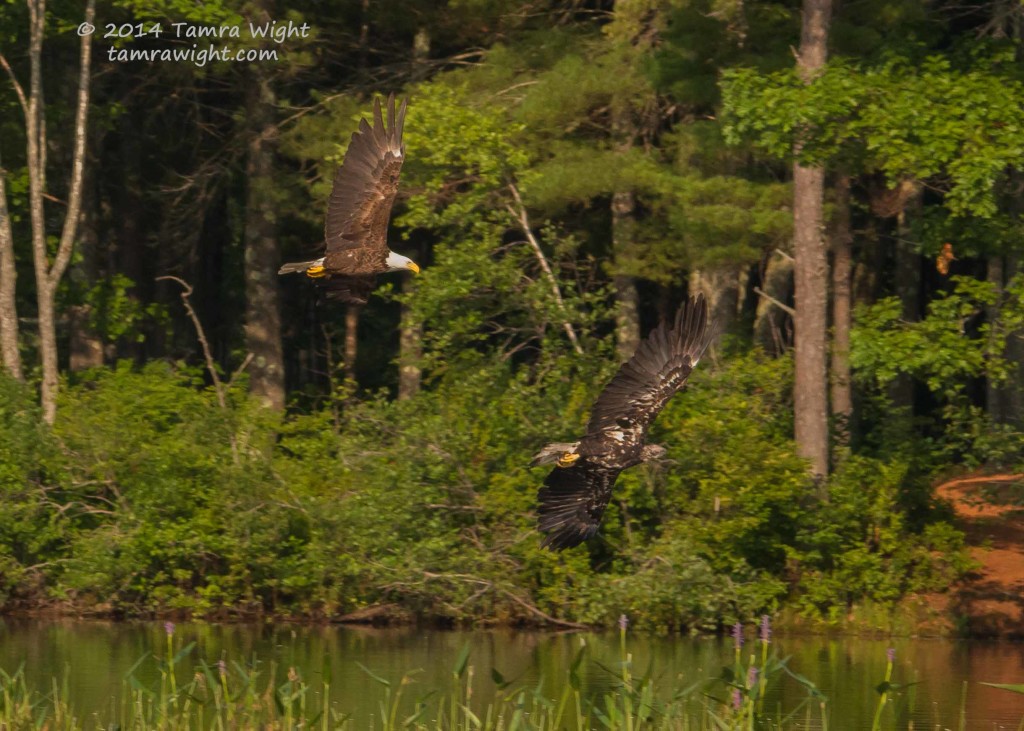 Ooooooo, she was relentless. 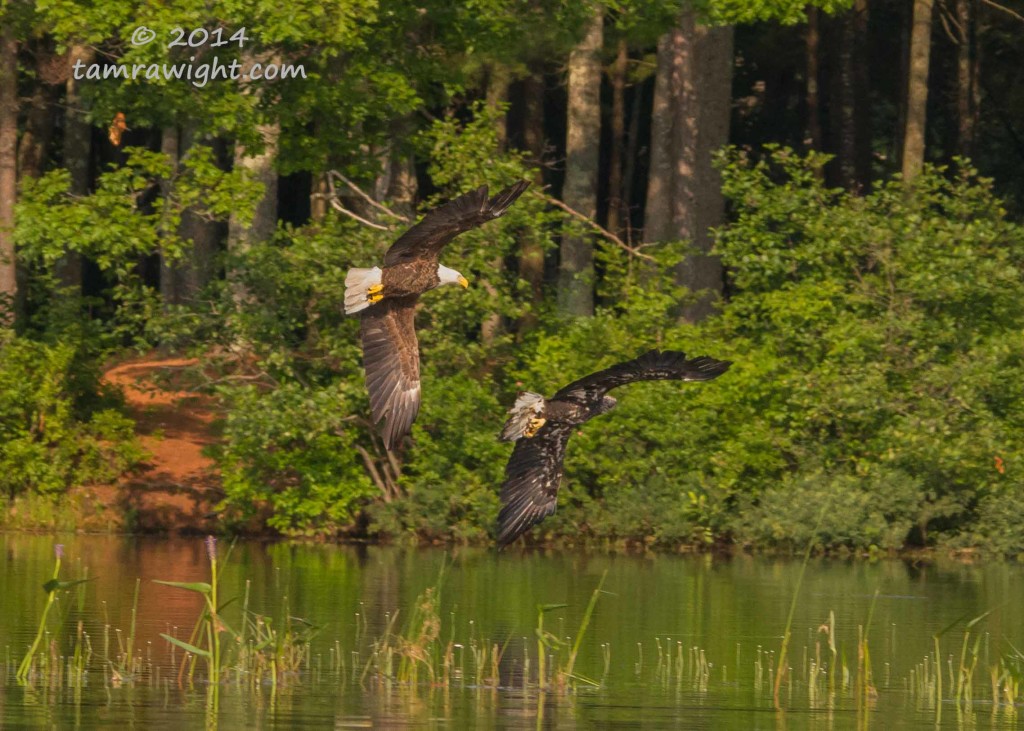 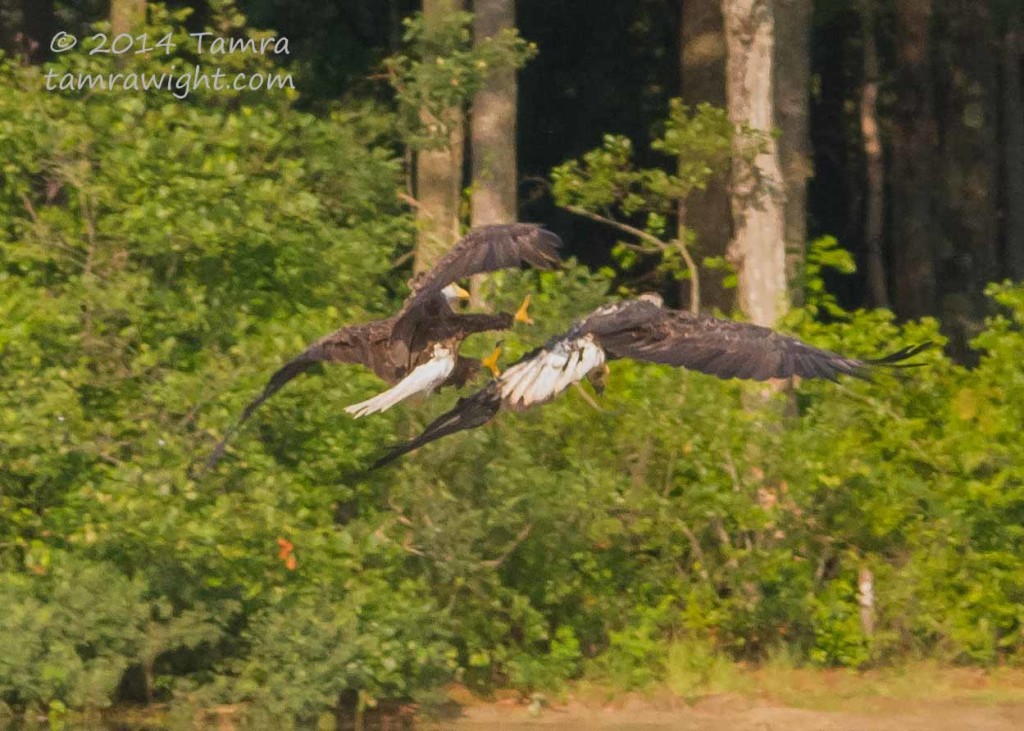 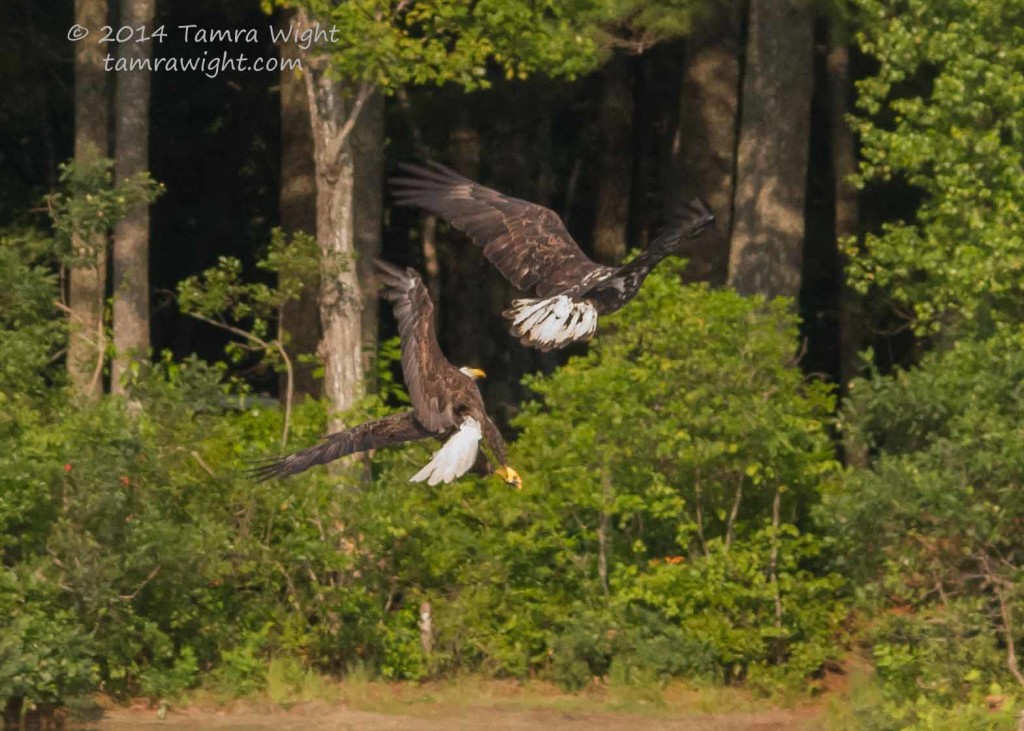 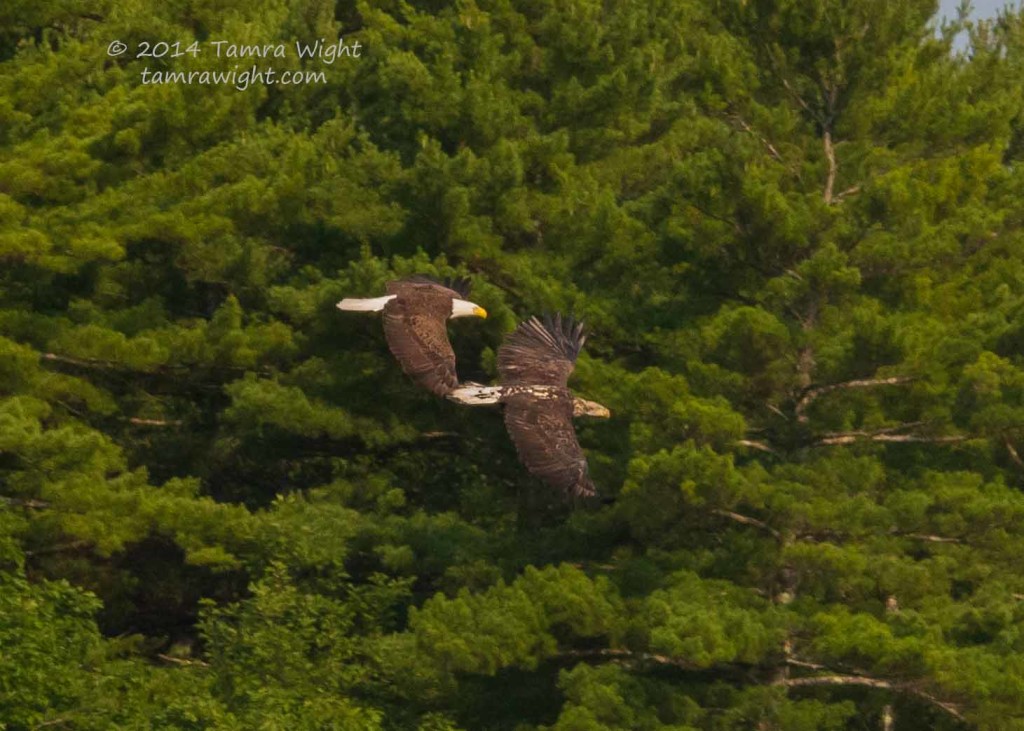 The last of my photos have these two as brown dots in the sky.  She chased this one away, across the lake, over the golf course and well over Middle Range Pond, before I lost sight of them.

This was an experience I’ll never forget.  Awe-inspiring.  Nature at its finest.

And after all that, I still managed to open the store on time. Although the first hundred customers of the day had to patiently listen to me tell my story over, and over and over again.