Thanks to the reminder from a friend on Middle Range Pond, I finally remembered to join in on Maine’s Loon Count.  I’d always wanted to . . . planned to . . .  then the date would come and go and I’d  miss it.

As I dragged my kayak into knee-deep water,  6:35ish Saturday morning, I smiled to think of all the other Maine volunteers.   Some would take to boats and kayaks like me. Some would stand on the shoreline with binoculars.  But all would be watching, counting and documenting their findings from 7 – 7:30am on this day.

It felt kind of awesome to be a part of something that big.

Because I had to be back at the campground office to open it up at 8am, my plan was to kayak down to the state park end of the lake, and then slowly paddle back during the recording time, because I knew I couldn’t cover the whole lake in half an hour, but the loons seem to hang out on this end more than the firestation-end.

I’d barely dipped my paddle half a dozen times, when I saw a loon through the early morning fog. 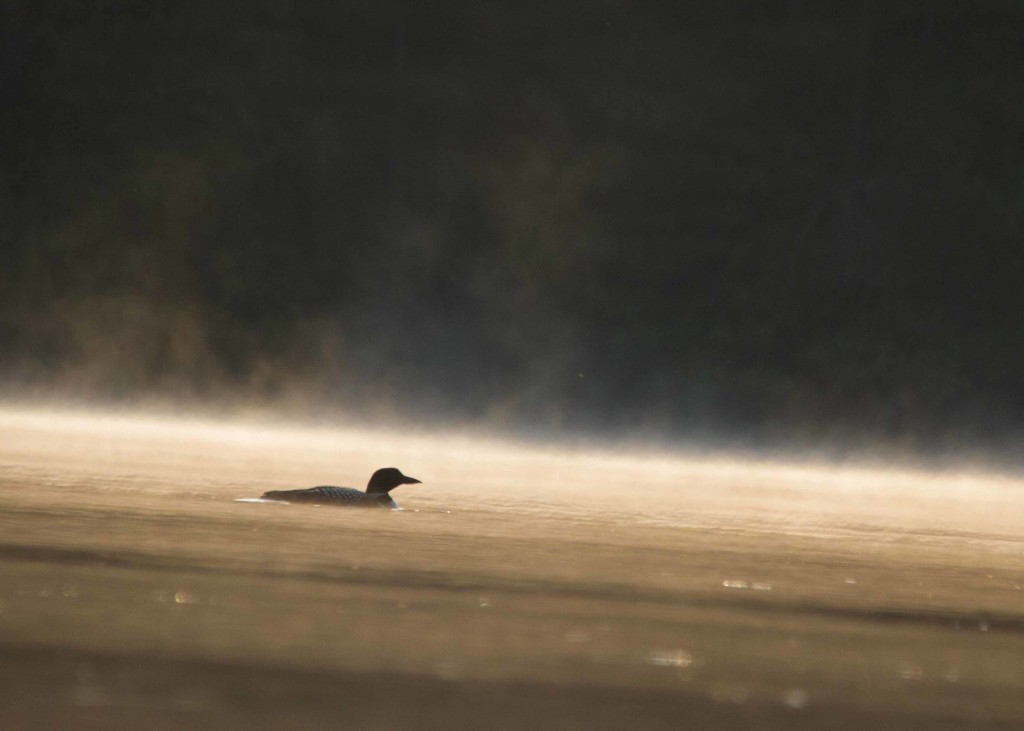 But not too early to snap photos. 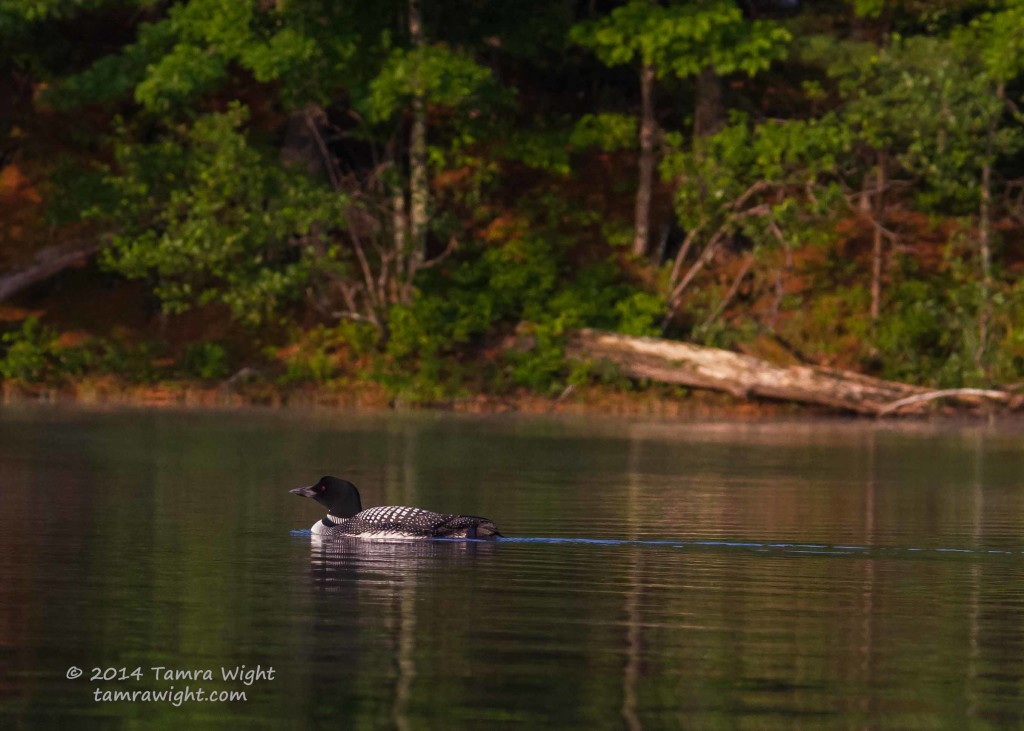 I stuck to my plan and headed toward the State Park.  To my surprise, the loon kept time with me.  I paddled slightly left to give some space between us, and it went left with me.  I slowed down, and it slowed down too. 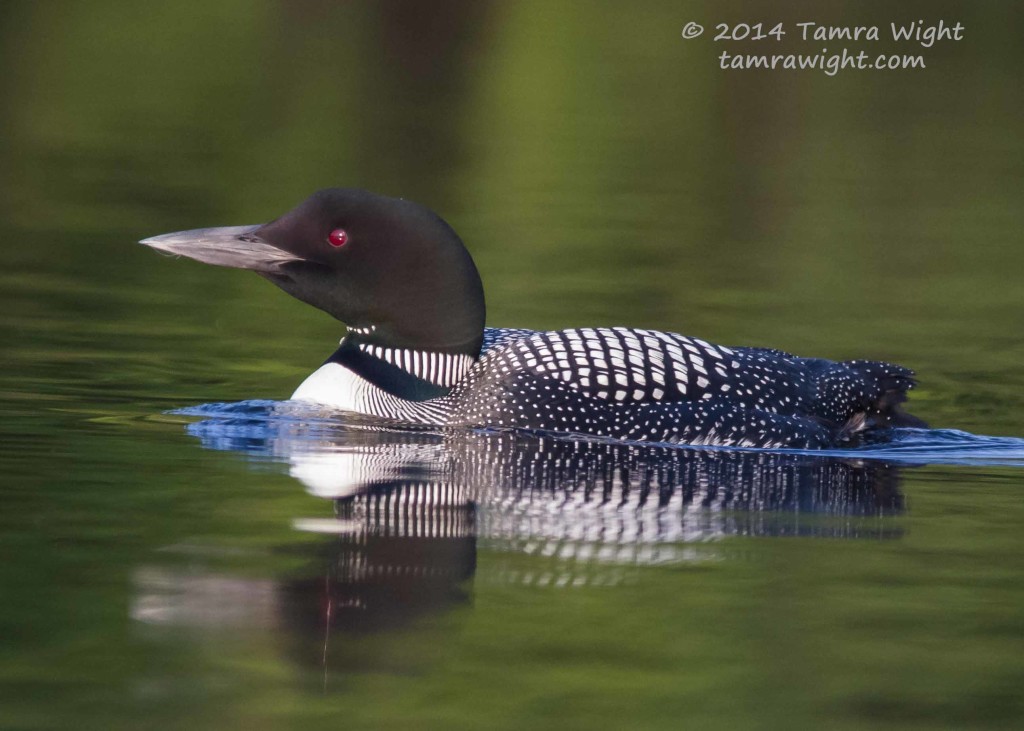 “I guess you want to be counted,” I said, making conversation.

The loon just looked at me. 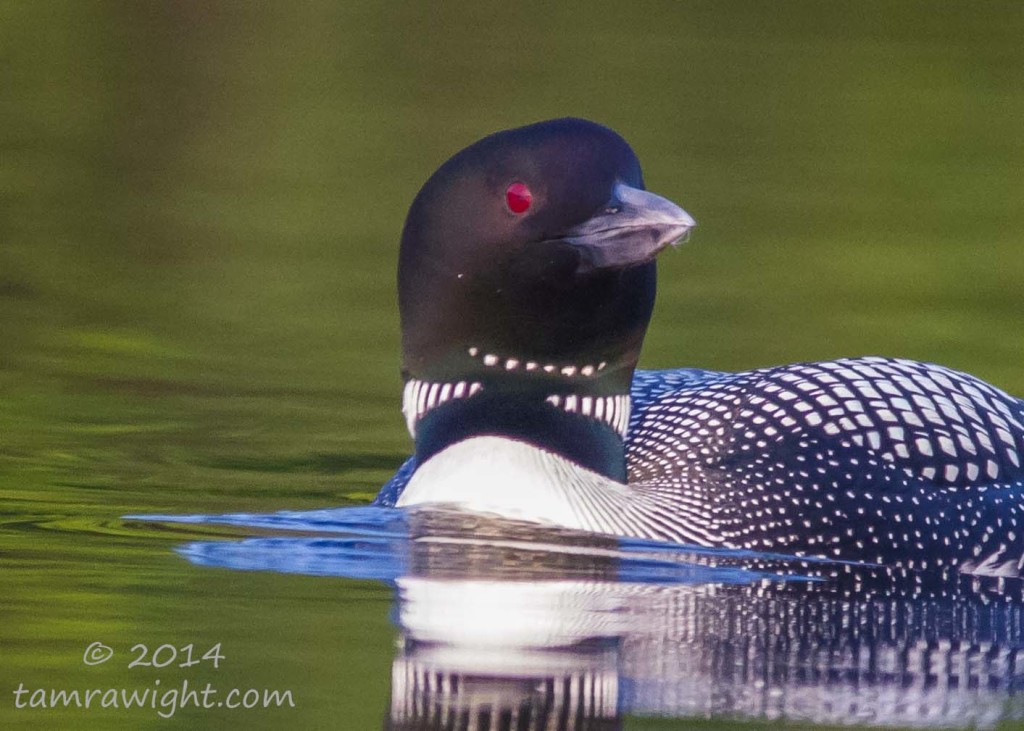 I couldn’t resist.  I snapped a few more pictures 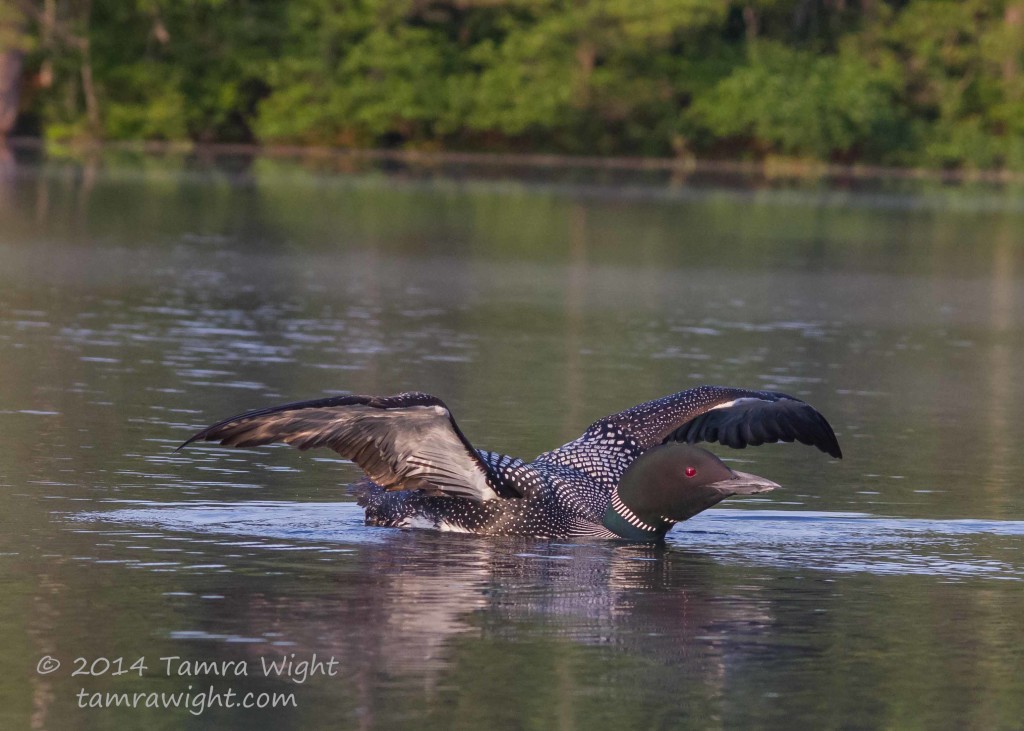 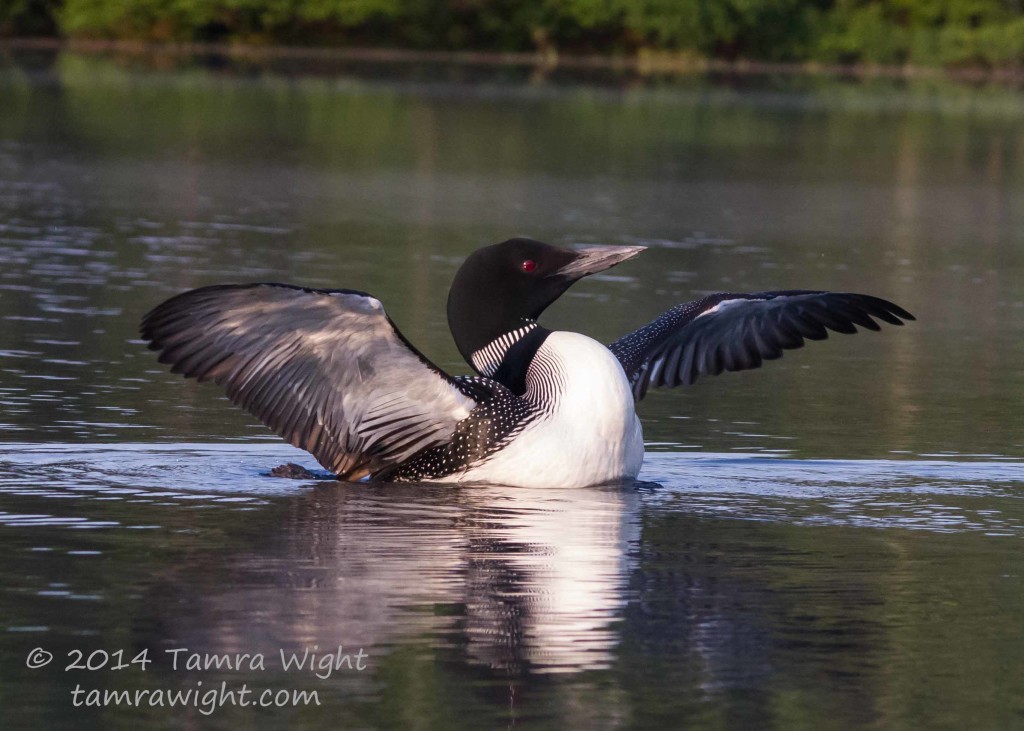 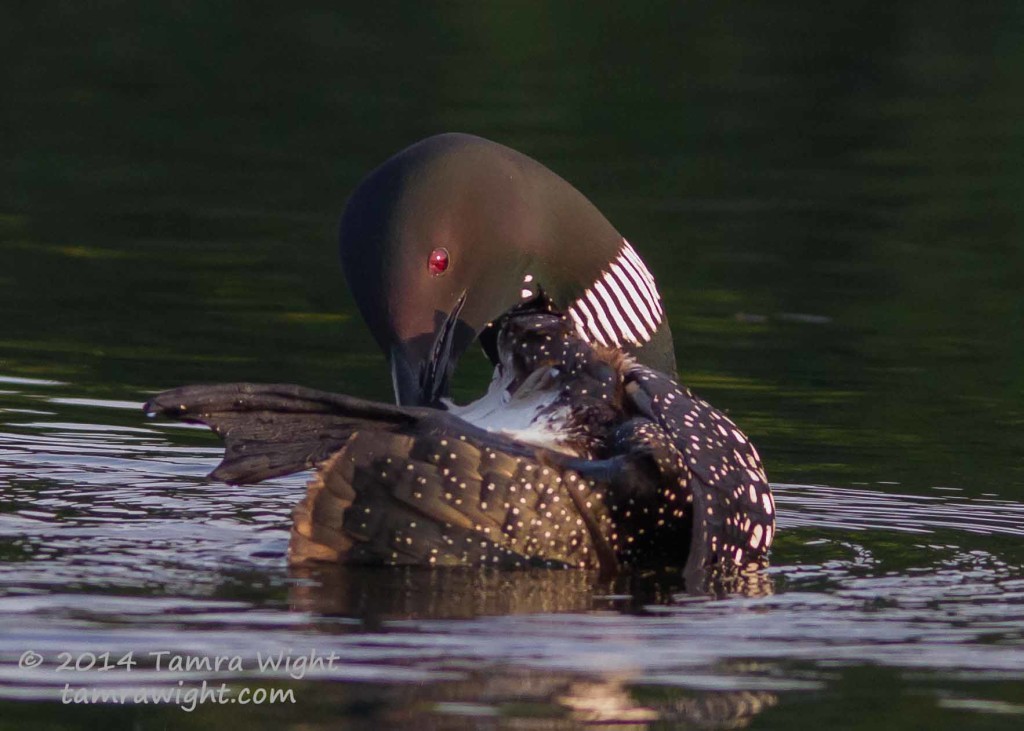 and then the loon looked upward. 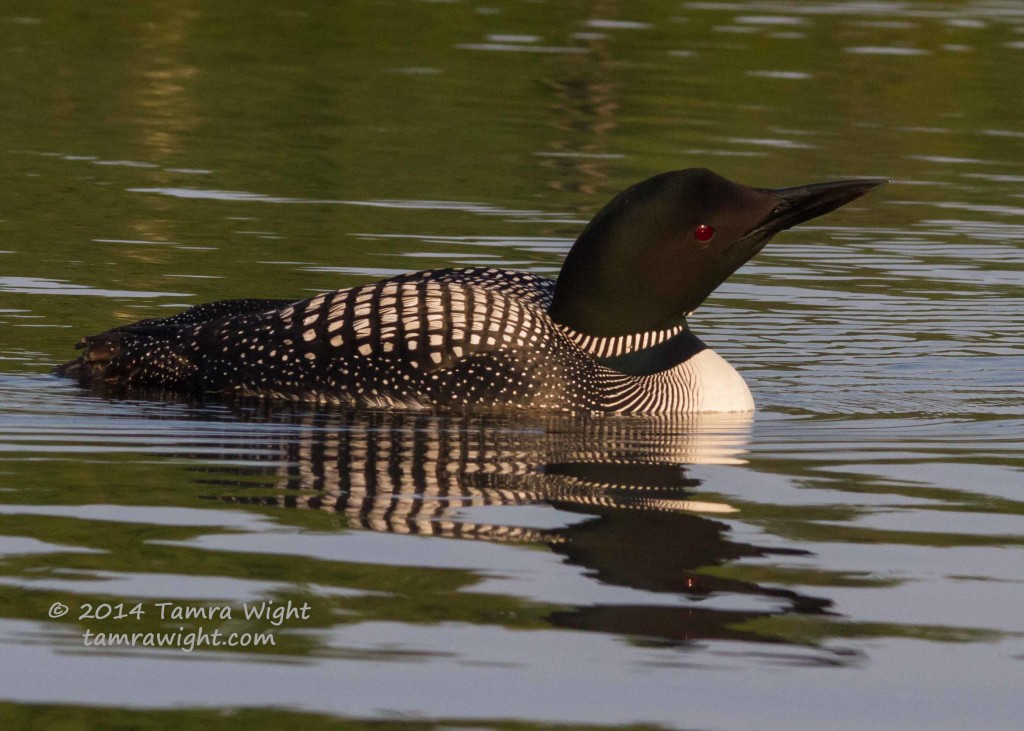 A second loon flew in and landed, before I could turn the lens on him. 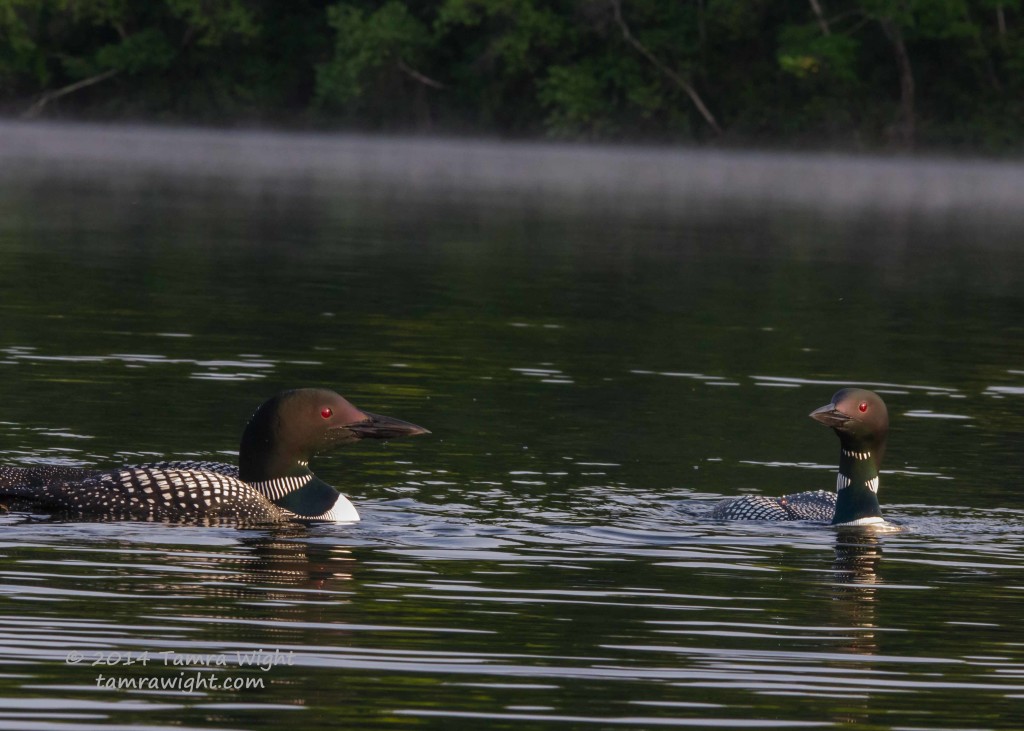 “Well, who told you about the party?” I asked out loud.

The two loons didn’t pay me any mind.  They greeted each other, swimming in circles, hooting and dipping their bills into the water (not their heads, just the bills).  It looked to me as if one had been waiting for the other.

Not even five minutes later, one of the two looked toward the end of the lake and hooted softly.  A third loon had appeared!  I had just scanned that area with my long camera lens and hadn’t seen him. Perhaps he’d been under water.  Perhaps he flew in too.

But here he was.

I watched for just a couple minutes more while sipping coffee.  The loons parted ways; the two staying together on the right side of the lake, while the last to arrive went off on his own to the left.

I dipped my paddle to begin the trek back to the campground.  Even though I poked into every little inlet and scanned the middle of the lake in front of the campground, no other loons appeared.

So ‘three’, was my answer on the paperwork. 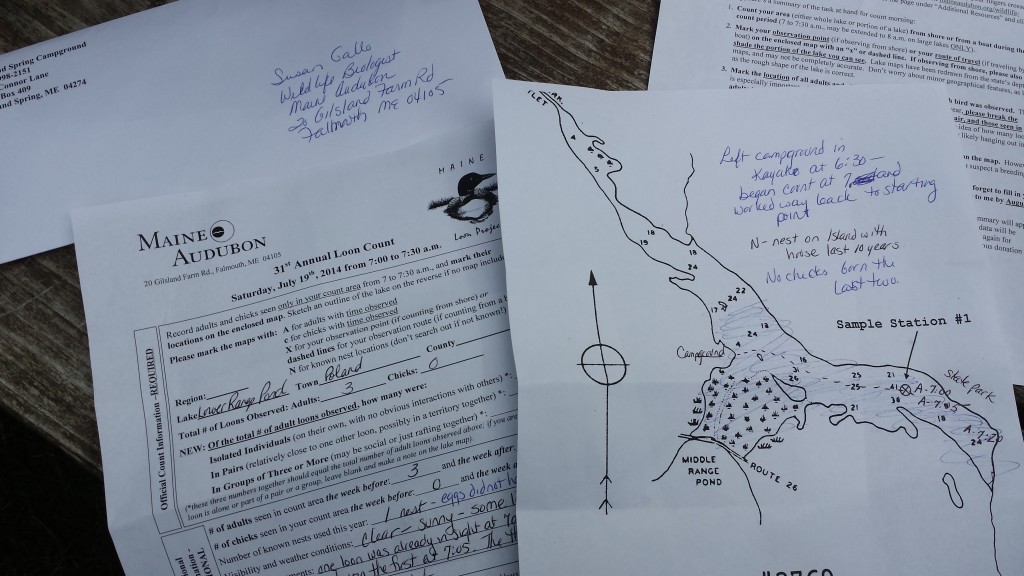 This entry was posted in Campground, Hiking/Kayaking and tagged birding, kayaking, loons, Wildlife. Bookmark the permalink.