During the second and third weeks of monitoring the loons nesting period, I got into a routine.  I’d paddle out at  6am to see them, coasting the last fifty yards or so. Beaching my kayak for stability, yet staying in it so I wouldn’t tower over them, I’d lay my camera in my lap at the ready. With a nod to the nesting loon, I’d sip my coffee with one eye on them, and the other on the rising sun. 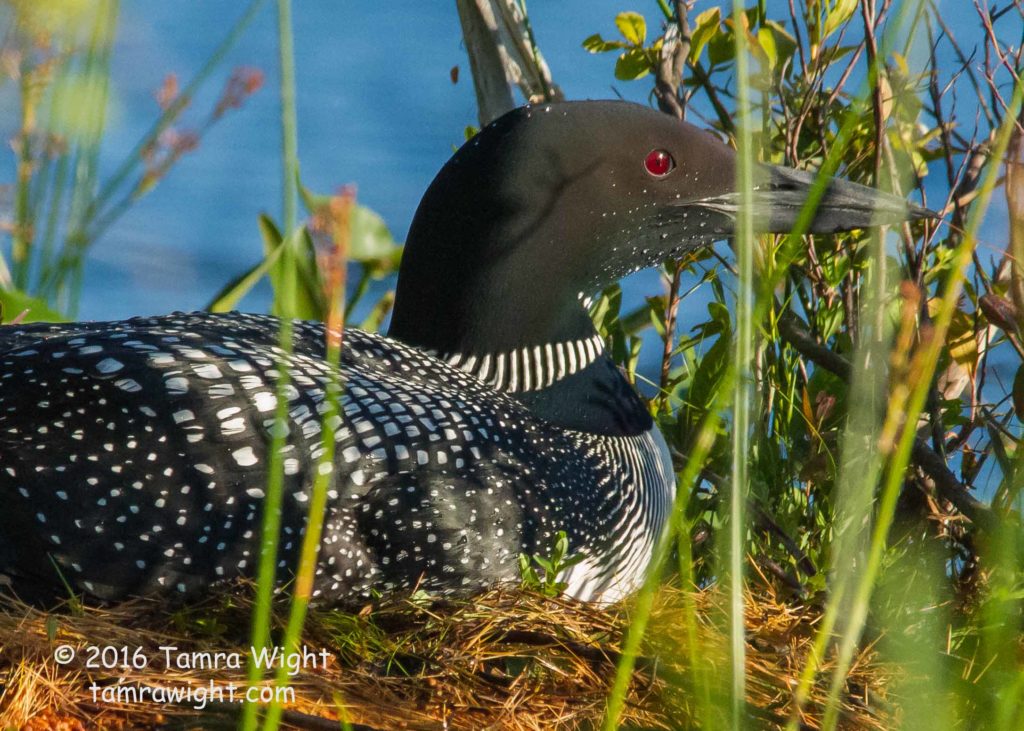 Smaller songbirds sang and flitted around us. 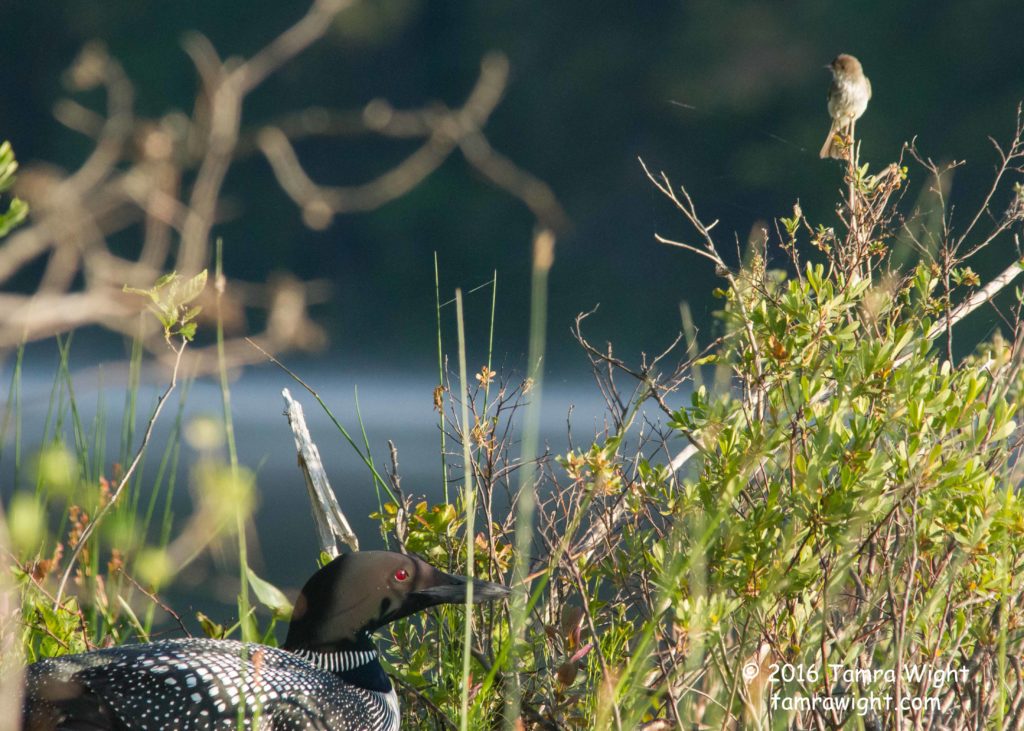 They skimmed the water’s surface for breakfast. They fed their young. 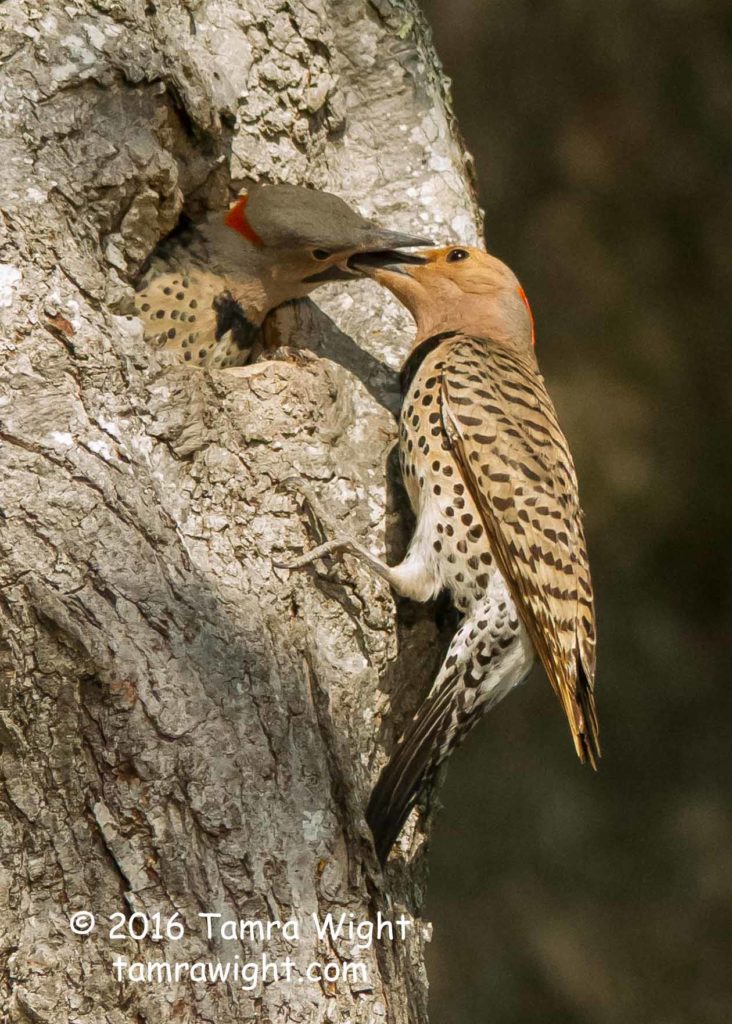 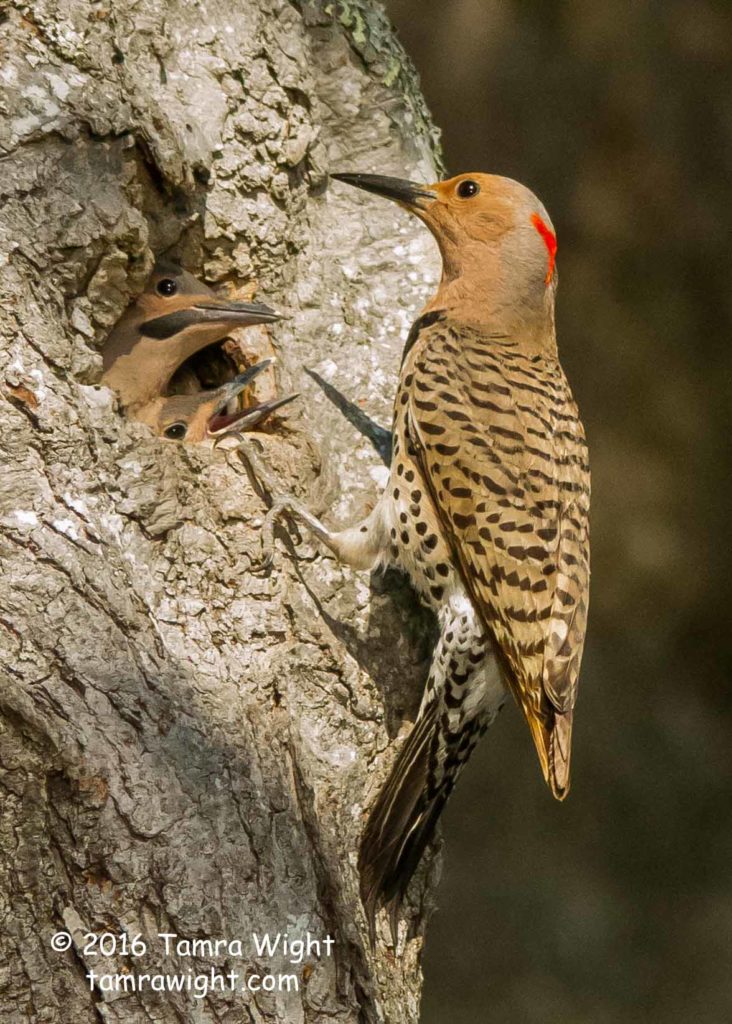 Every now and then, the loon on the nest would glance at me, then gaze back out over the lake.  Honestly, most of my time was spent watching the loon look side to side, and back again.  But I didn’t mind. Being there in that place, at that time of day, was like medicine for my soul after a busy Spring of teaching and running a campground.

A couple of times, the loon laid her head down suddenly. I knew this meant it felt danger in the area. Just as I began to wonder if she was tired of my company, or if I’d made a noise she wasn’t familiar with, an eagle or heron would fly over us toward the other end of the lake.

It always sensed them long before I saw them.

In those two weeks, I only encountered two kayakers and two fisherman. What a magical feeling, to be the only one on the lake!

Almost every morning around 7am, the second adult would make their way down the lake toward us, fishing or preening as they floated along.  Once, it napped for fifteen minutes within fifty yards of the nest. 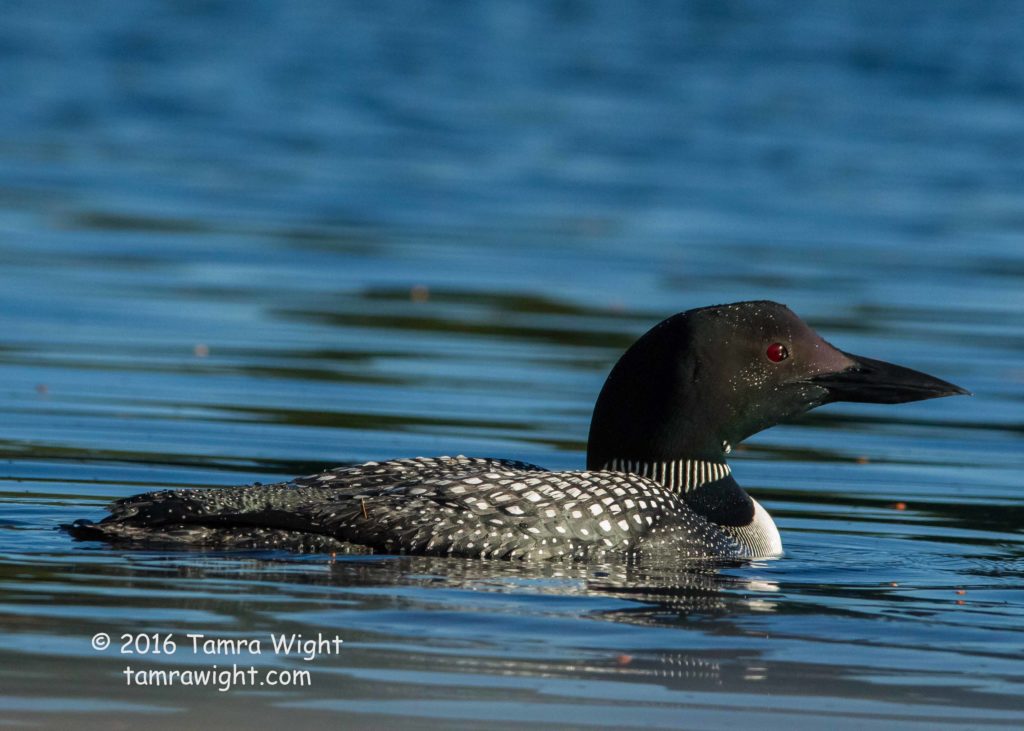 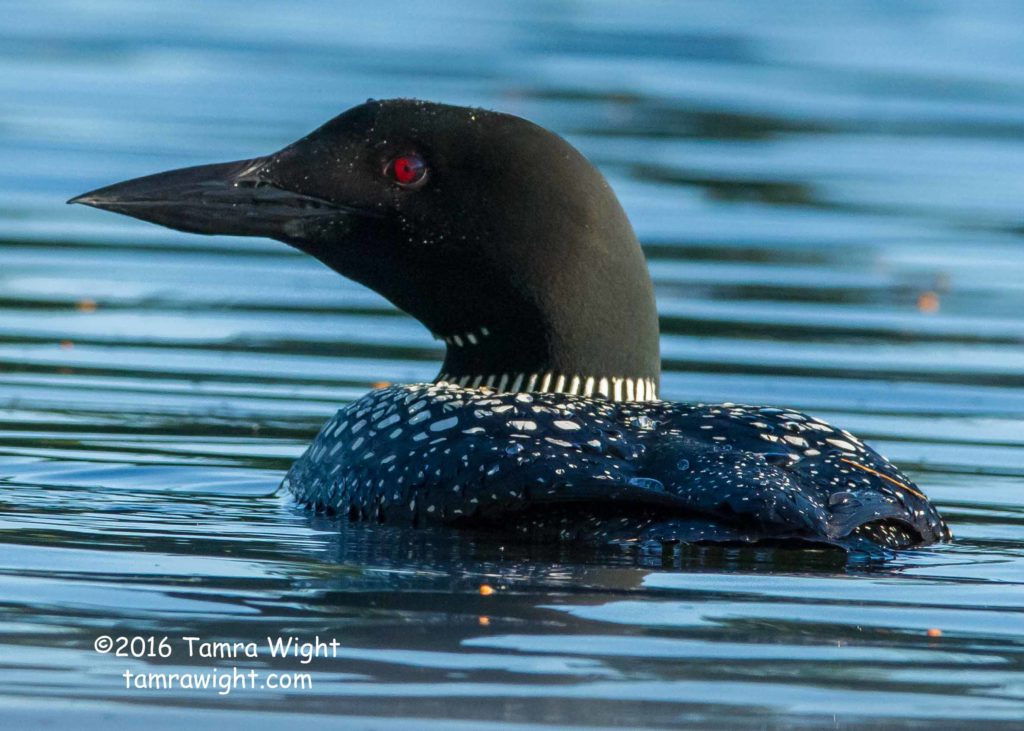 Eventually, the loon on the lake would come a little closer to its mate and hoot softly.  I began to recognize it as a “let’s-switch” call because always, the one on the nest would slip into the water to join him/her. 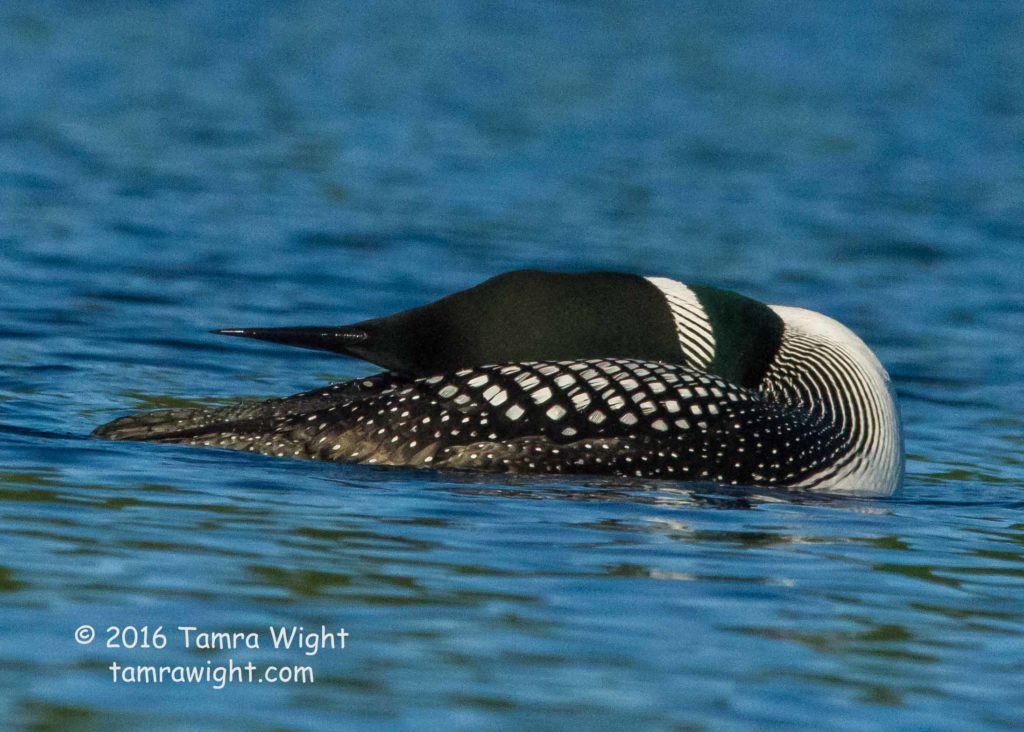 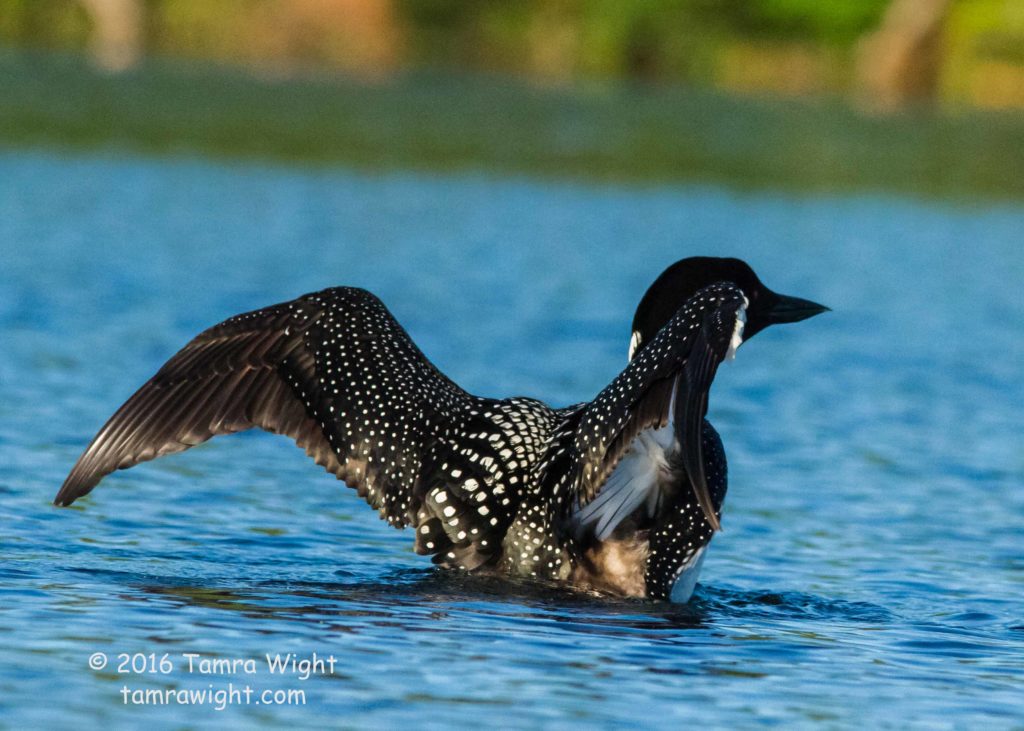 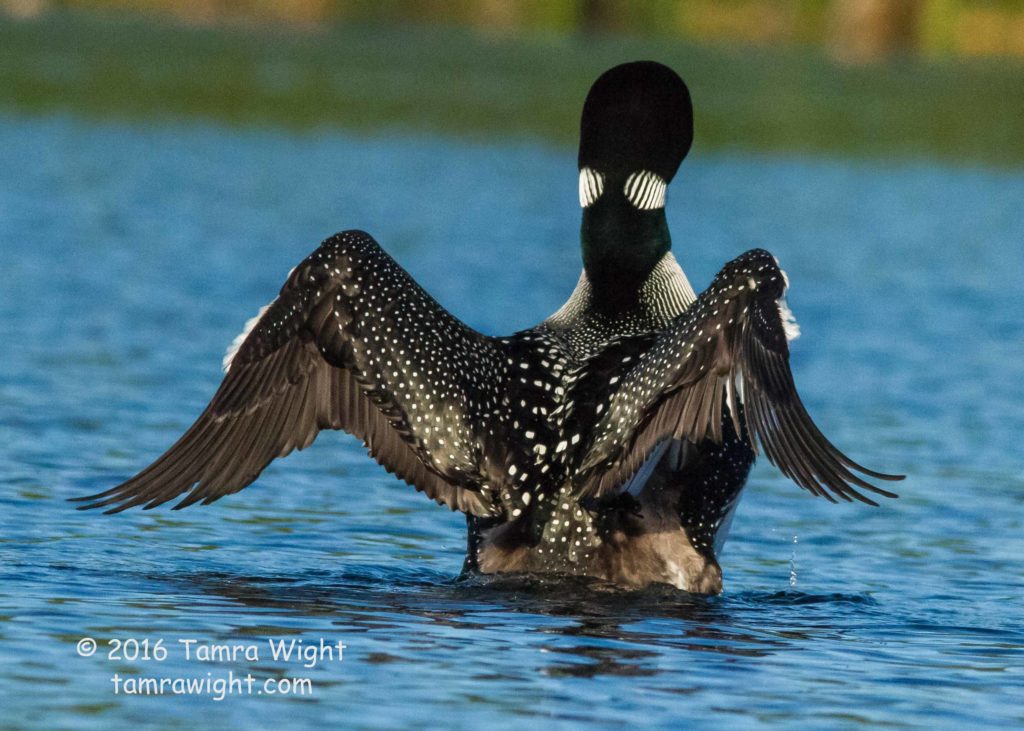 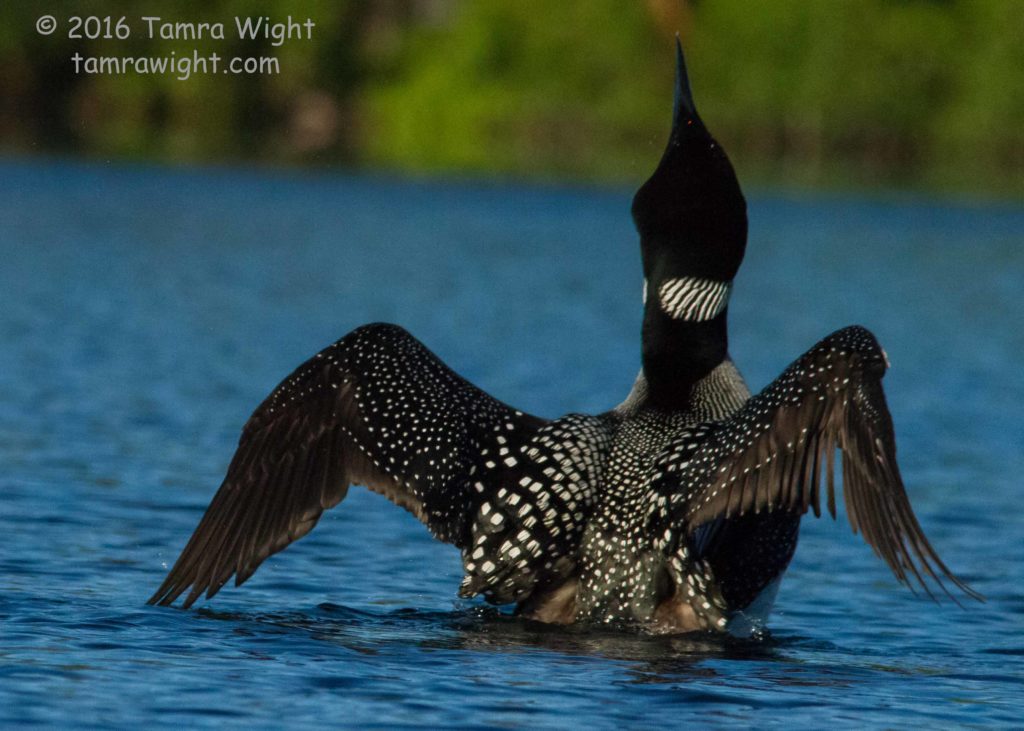 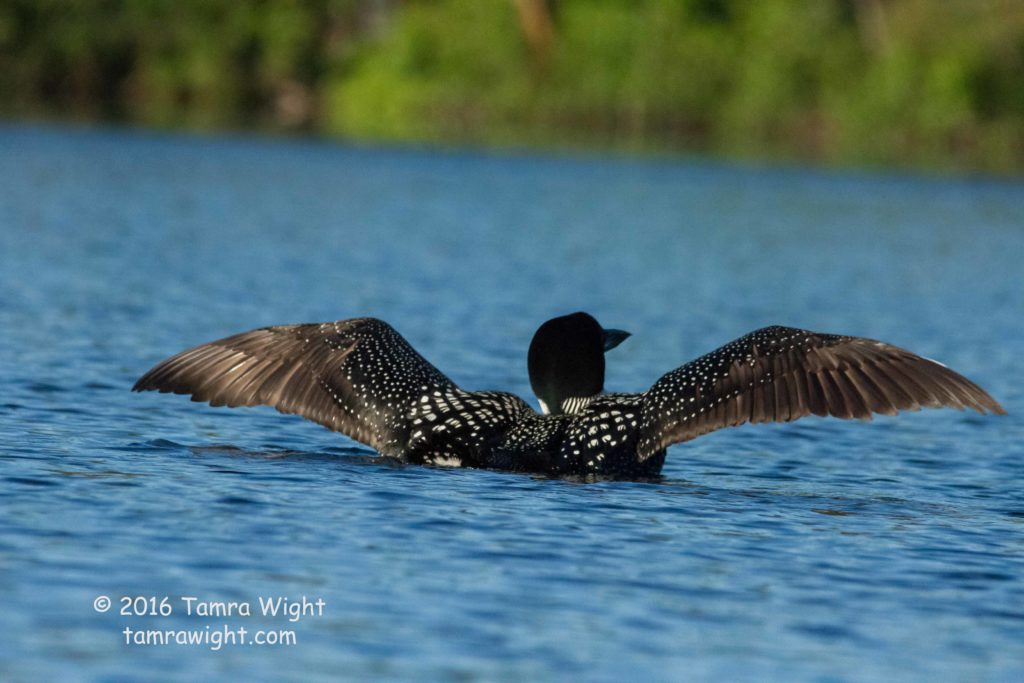 . . . they preened, and continued to hoot softly to each other. 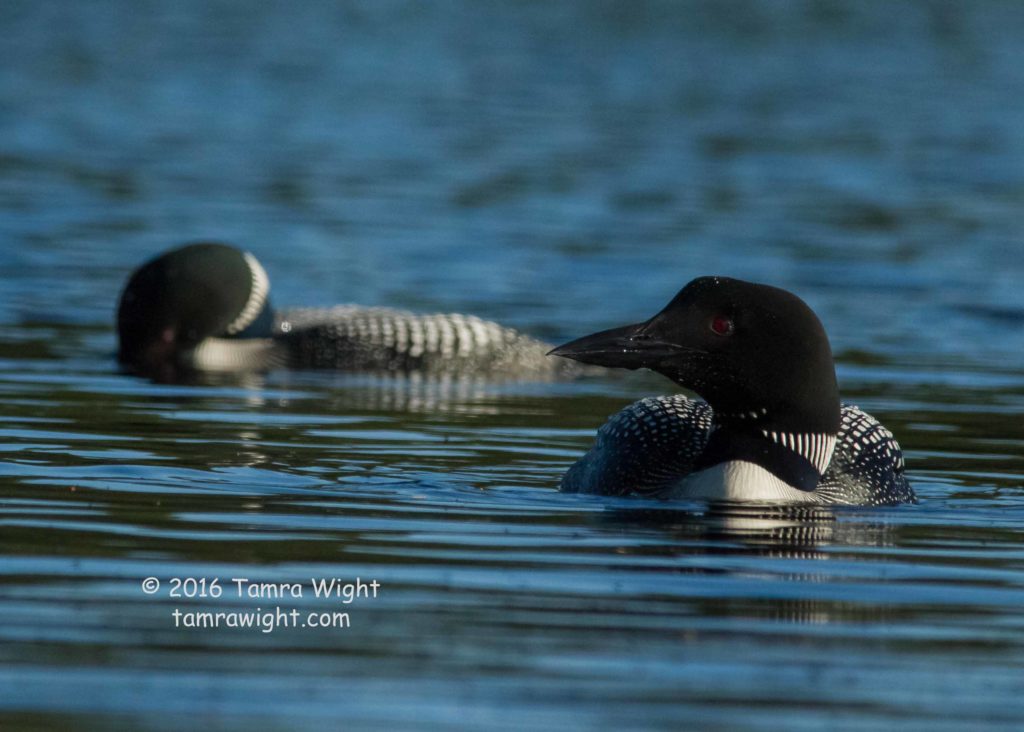 It reminded me of Dave and I connecting over dinner, after having been in different areas of the campground all day.

More than once, one or both of the loons popped up within a few feet of my kayak, seeming to “check me out” before going back  to deeper water.

I was surprised they left the eggs alone, although in hindsight, they were never more than twenty yards away. 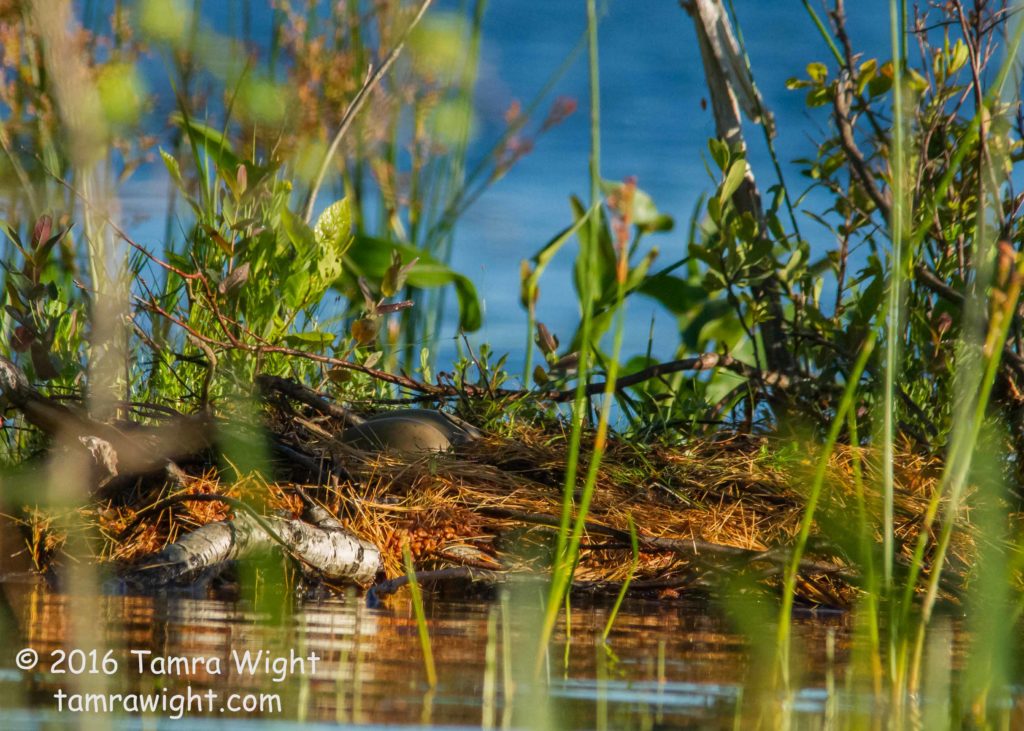 After 7 or 8 minutes, the loon that’d been out on the lake, slowly made its way toward the nest as the loon who had been on the eggs, wandered off. 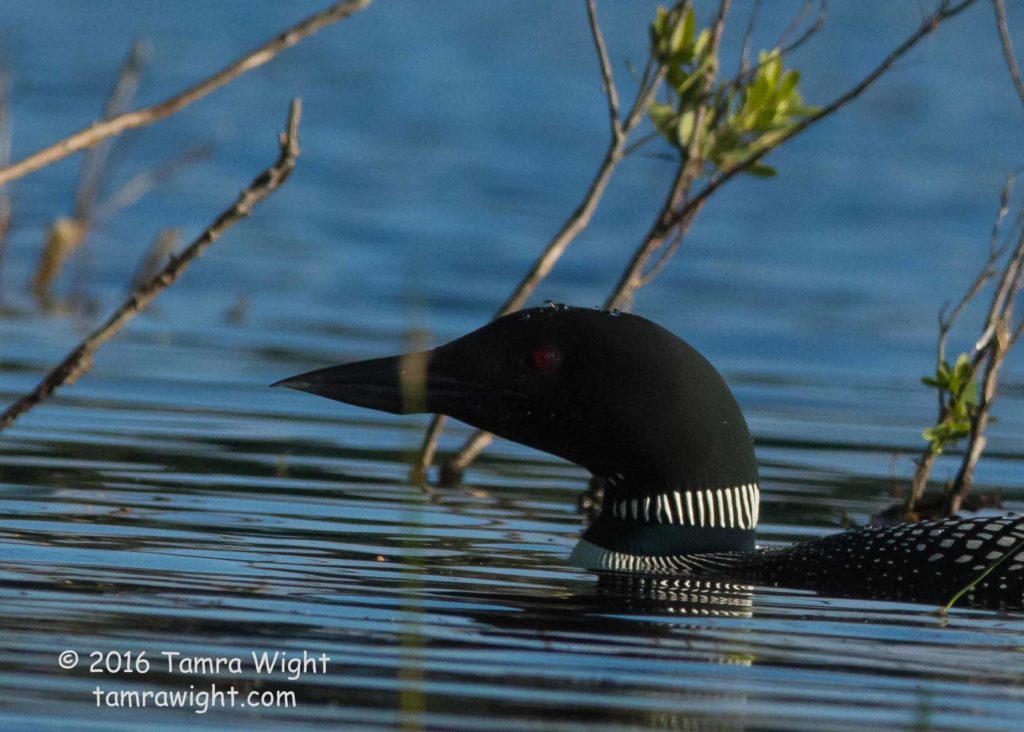 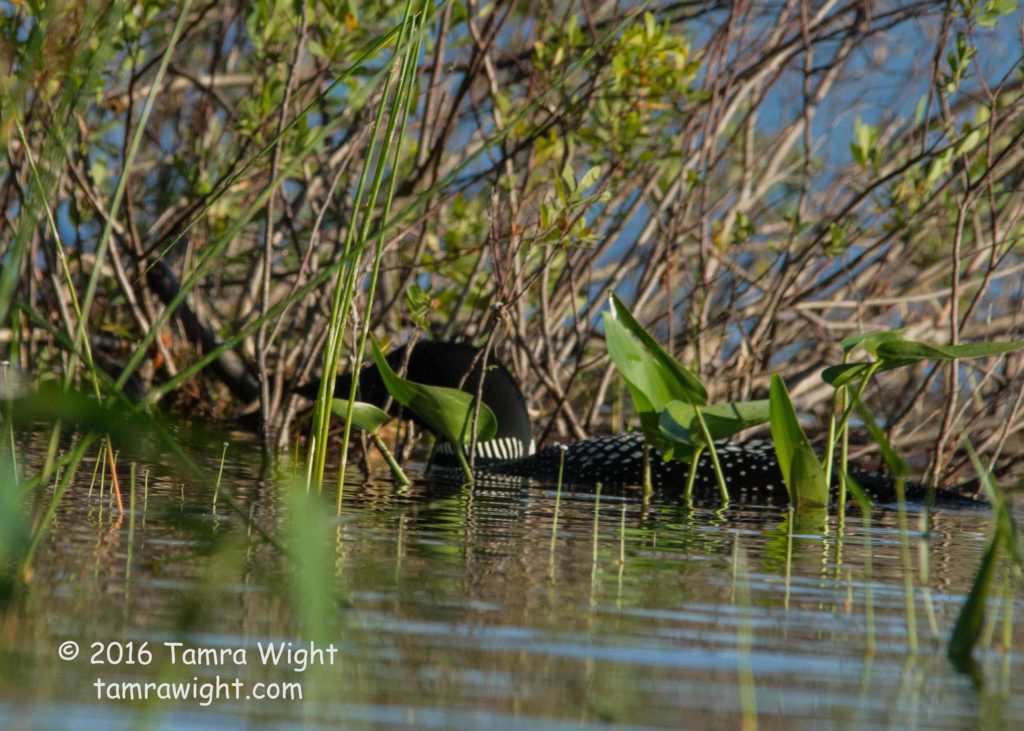 As the adult climbed up onto the nest, you could see why they don’t stay on land any longer than they have to. With legs at the back of their body, walking on land is awkward and clumsy compared to their gracefulness in the water. 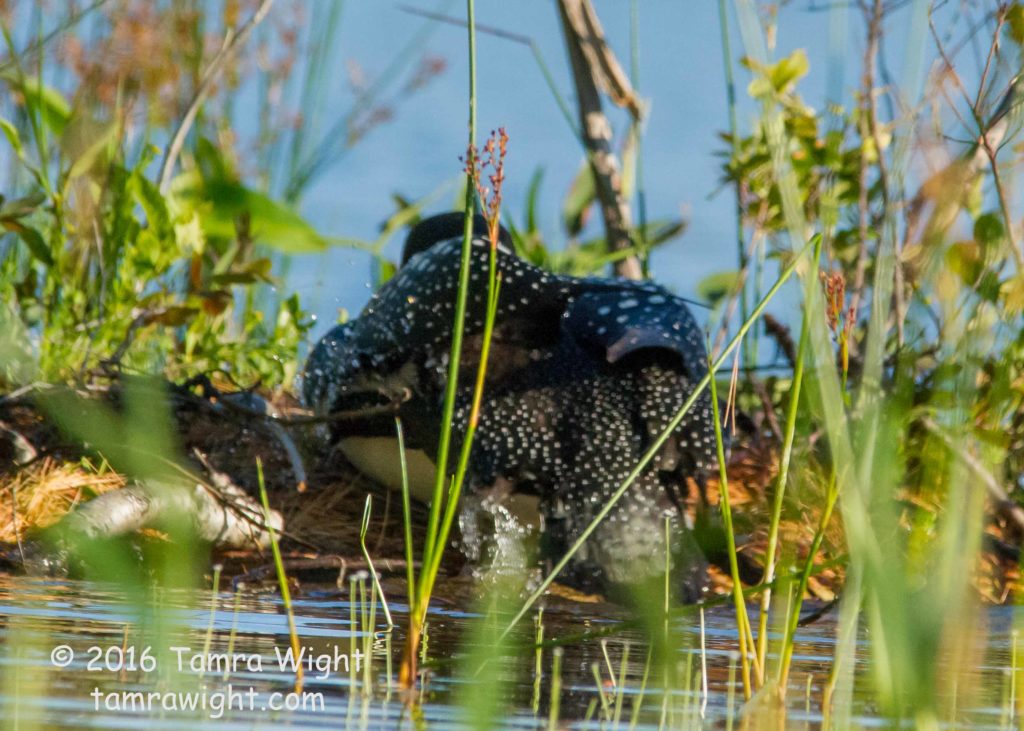 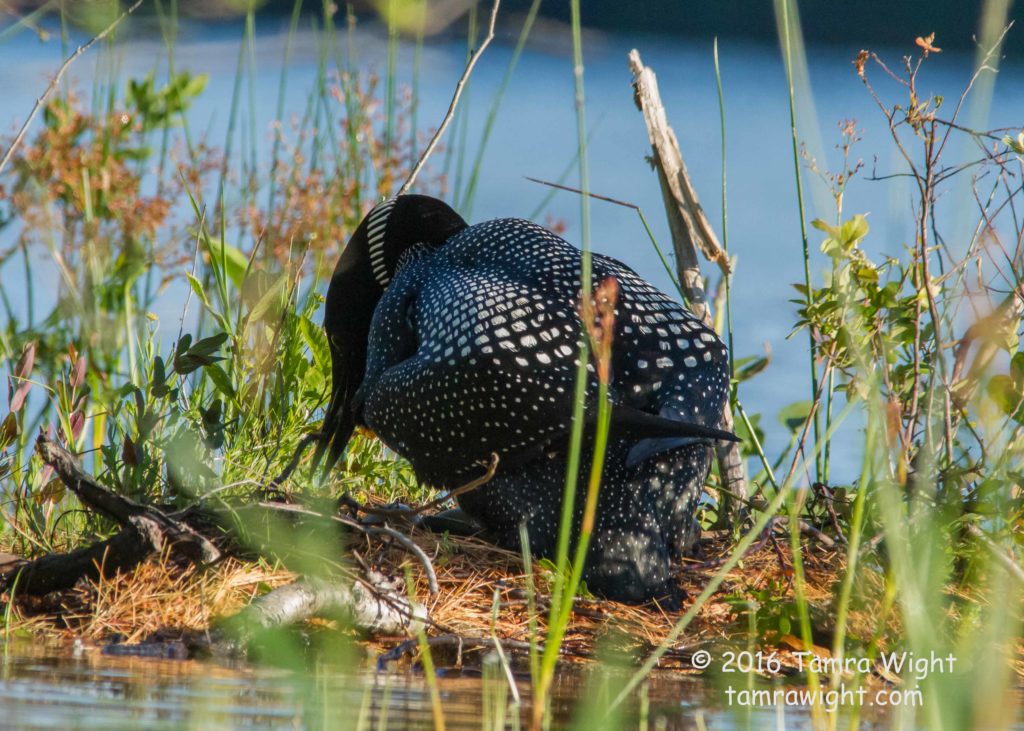 Before settling on the eggs, the adult would always turn them just so with the end and side of their beak. 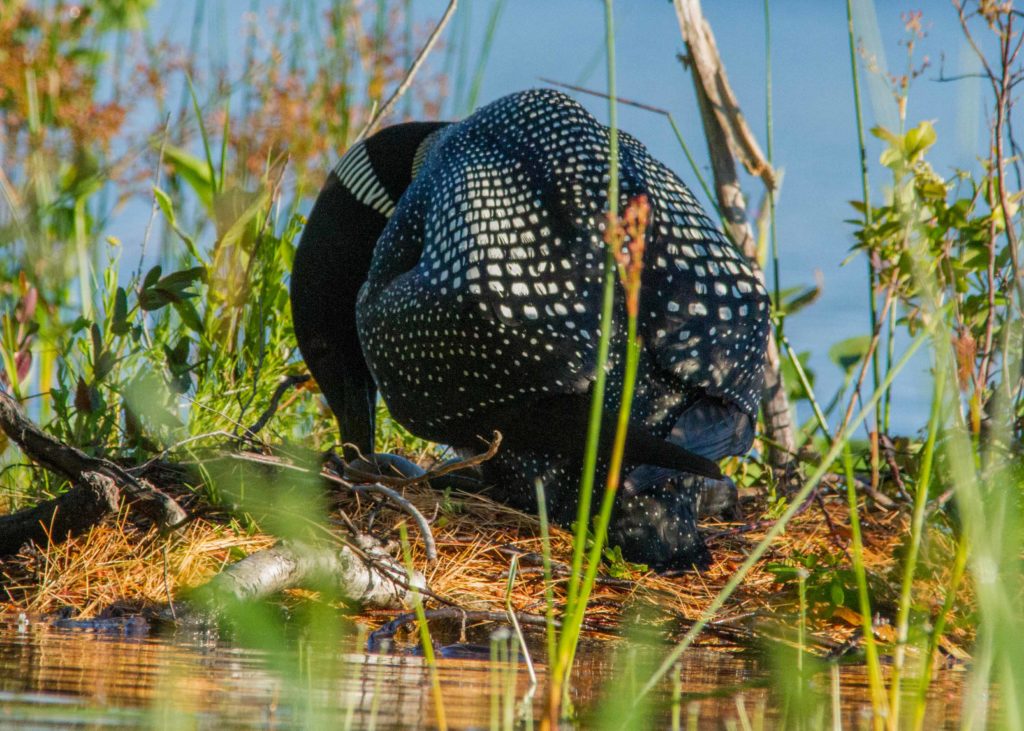 Go to this link to see a video of these loons switching places on the nest.

No matter how many times they did this, I never grew tired of watching.

I’m such a nature geek. 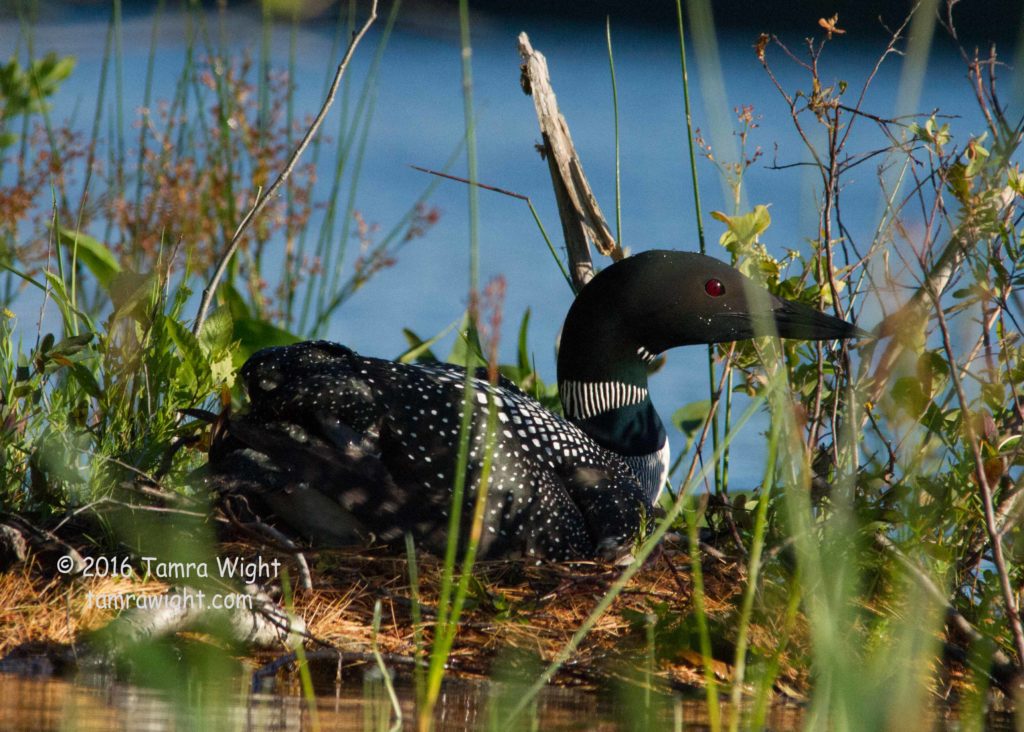 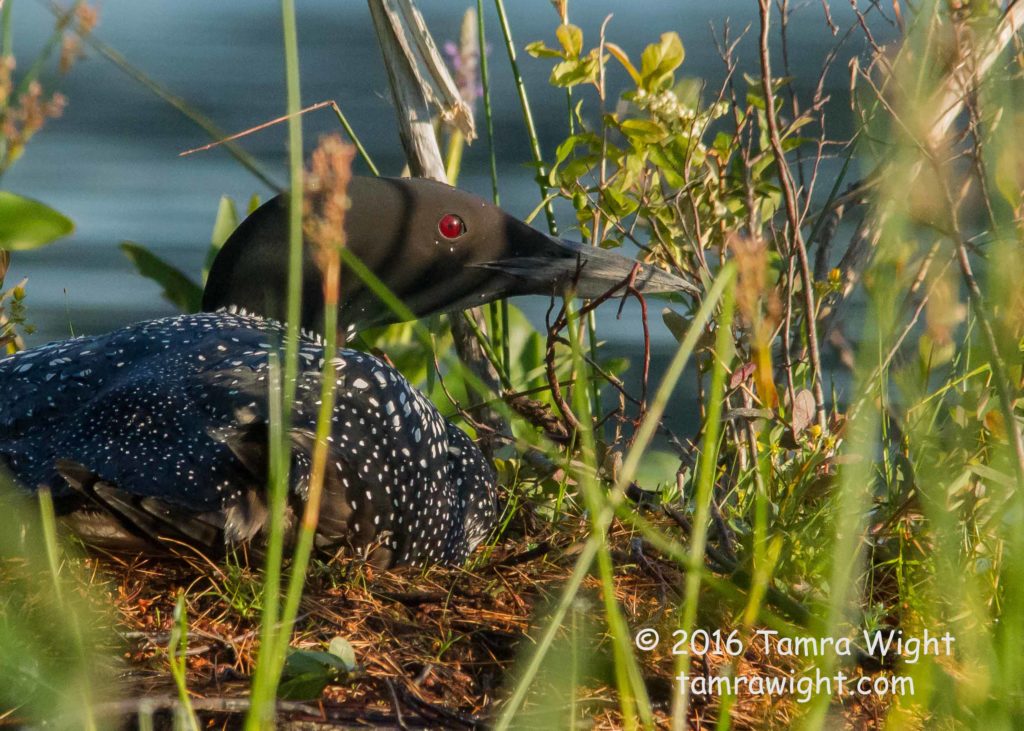 Next: Week Four: The final days before hatching

2 Responses to Weeks Two and Three: My Loon Watch