I almost left this as a wordless post – and let the pictures do the talking . . .

But this author doesn’t always know how to “do” wordless, loving instead to give the background on what I’ve witnessed ‘in the field’.

While kayaking last August, I saw in the distance an eagle on the edge of the lake, in the shadows. It appeared to be bathing. The splashing water is actually what caught my attention at first. Well, that, and an eaglet up above on a branch hollering down to it, probably looking for its next meal.

Bathing pictures are on my bucket list, so I slowly paddled forward, hoping to get close enough, but alas, it took to the air. 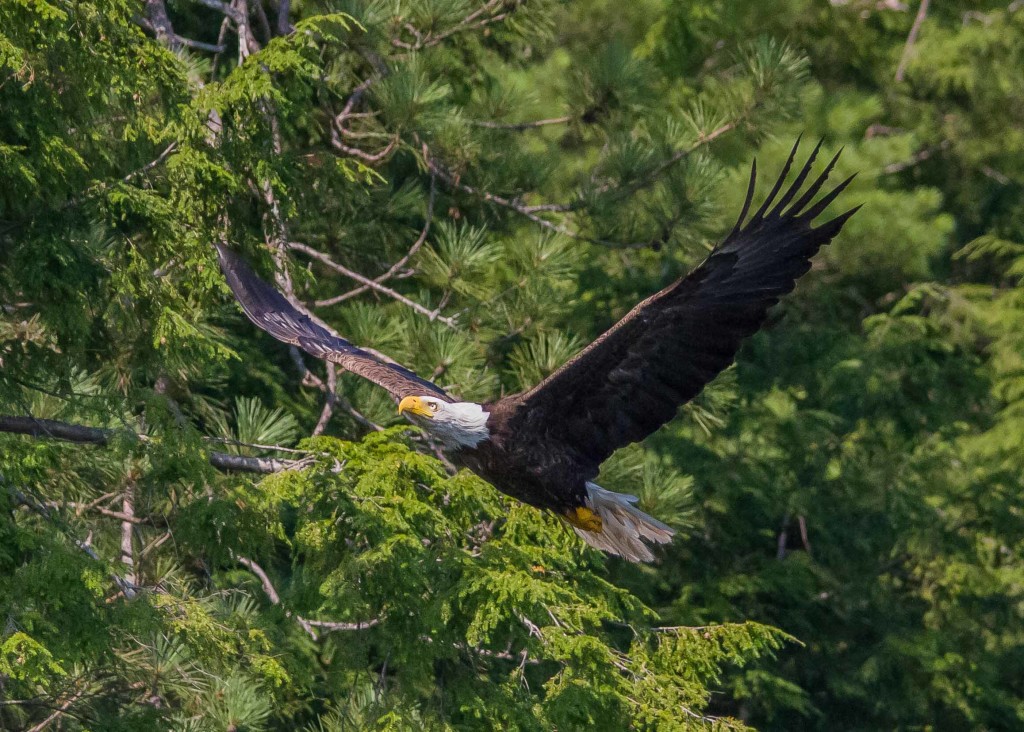 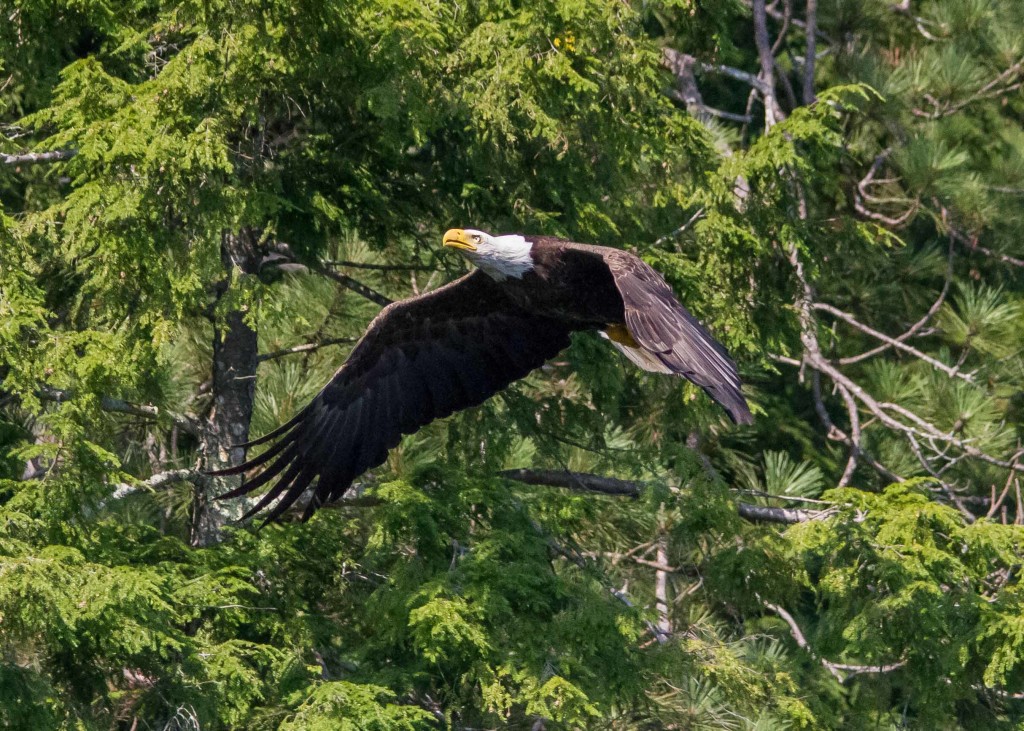 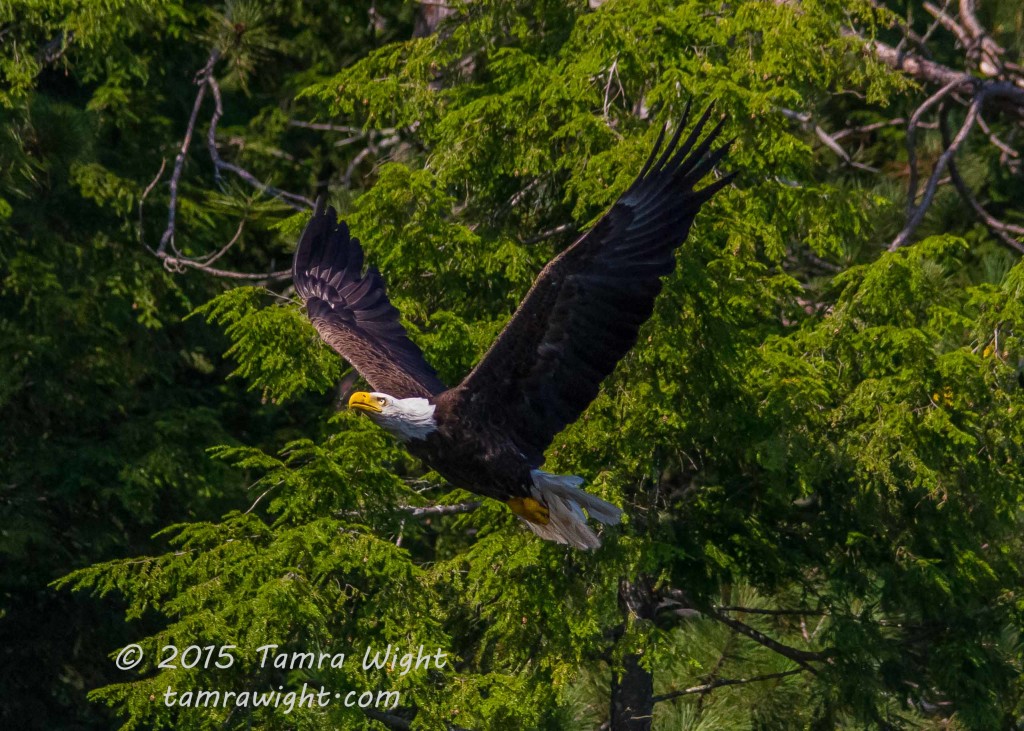 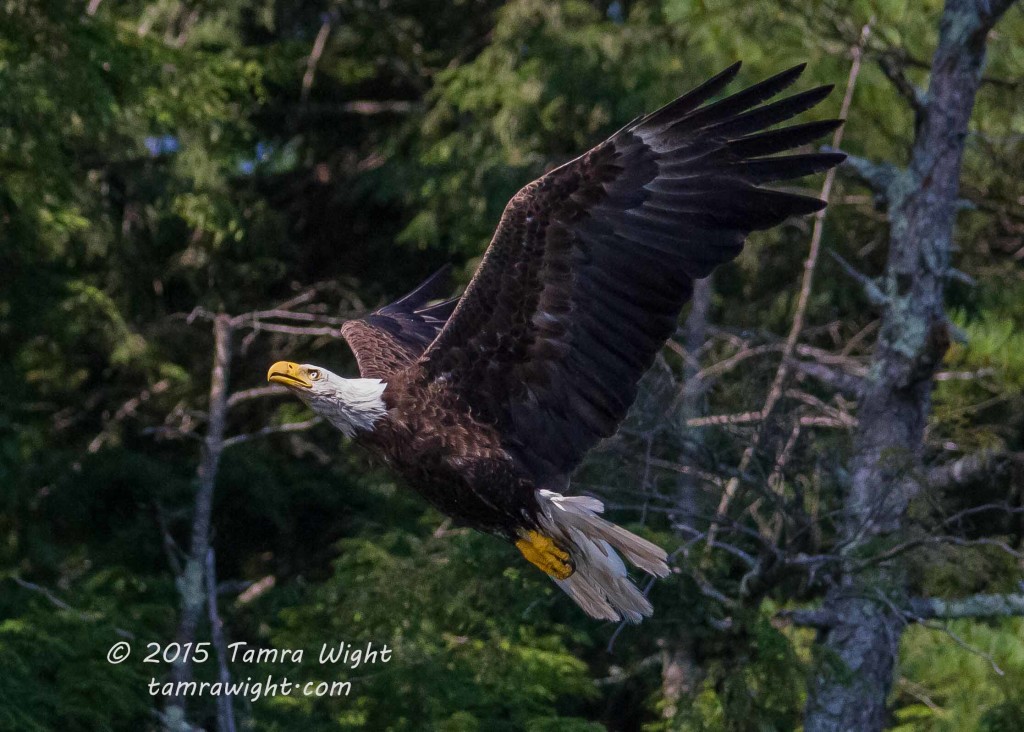 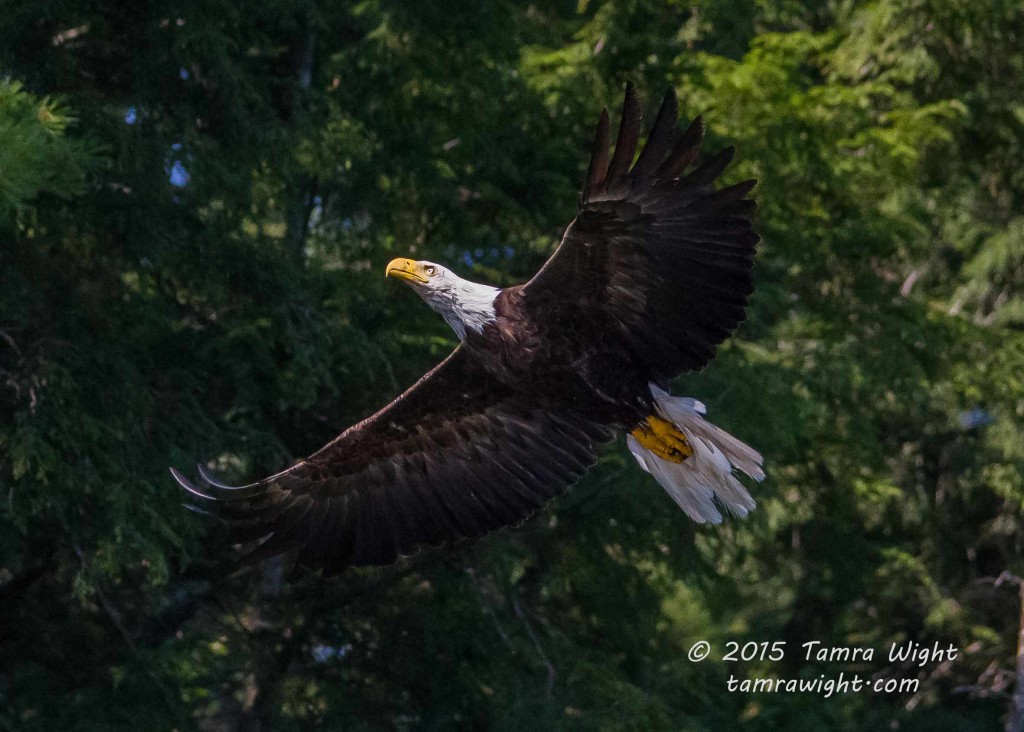 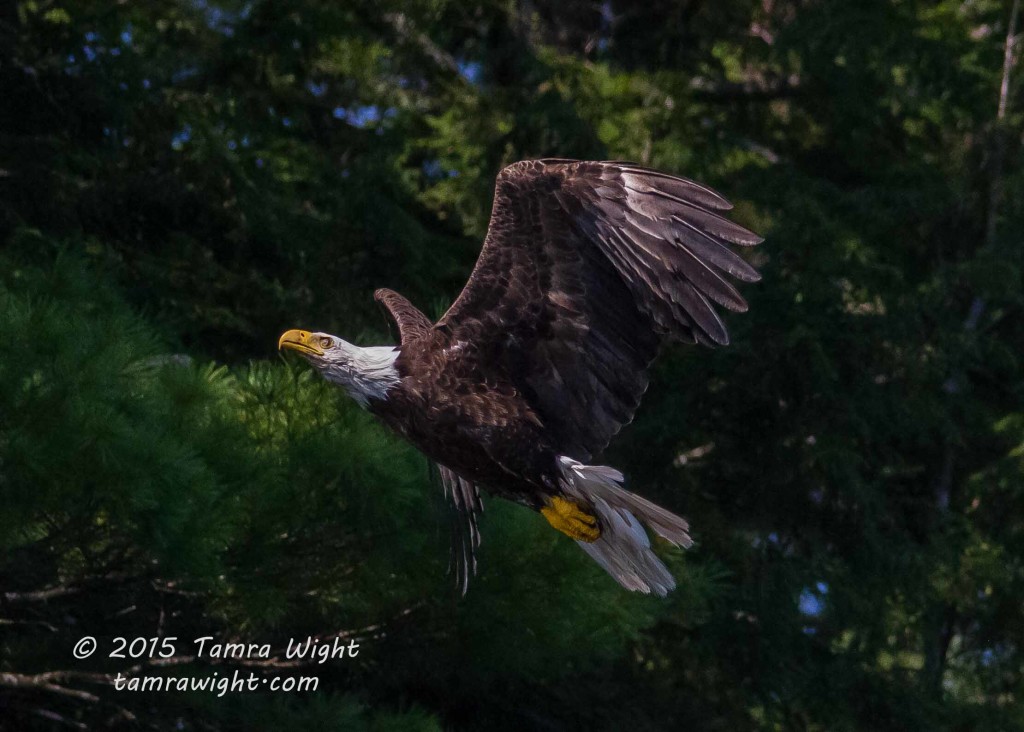 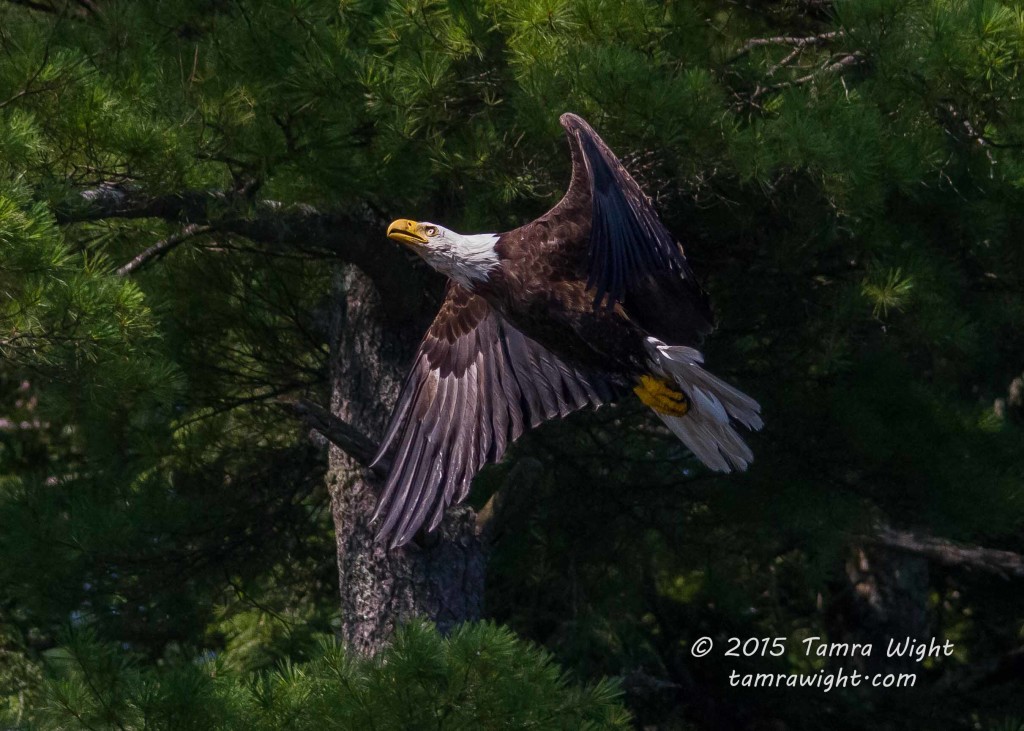 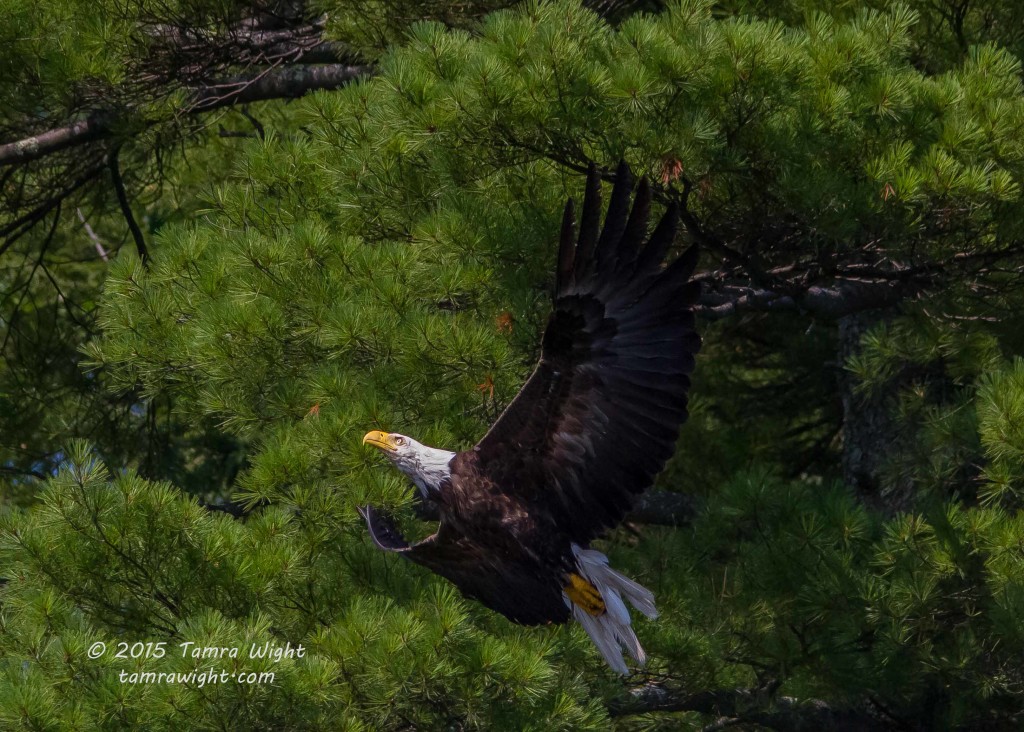 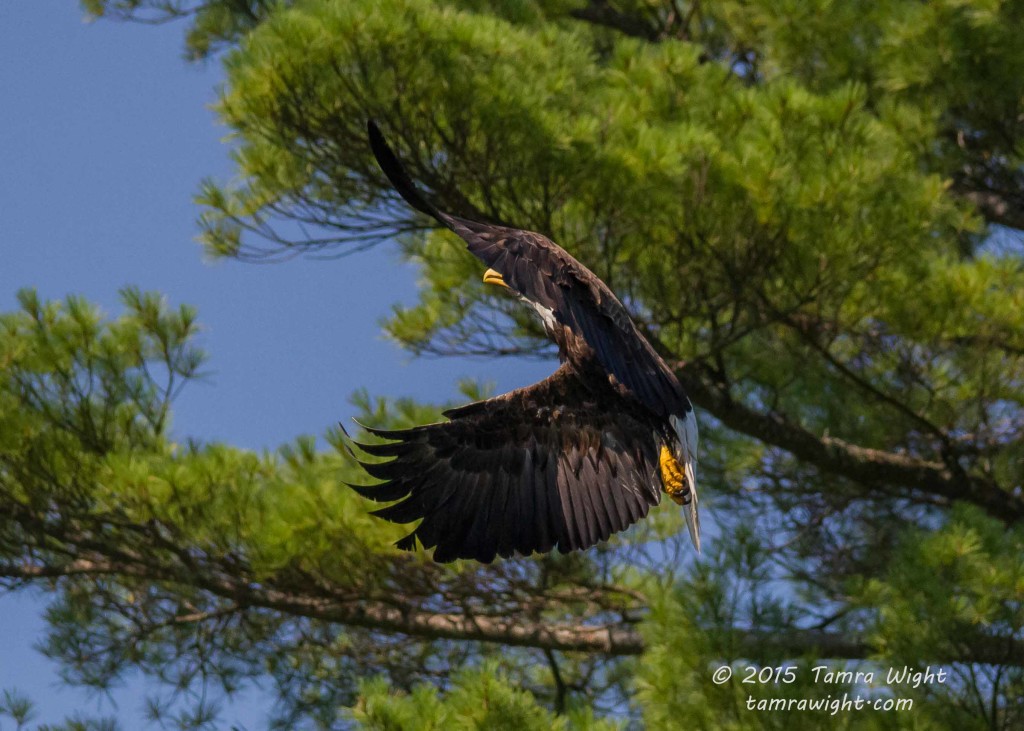 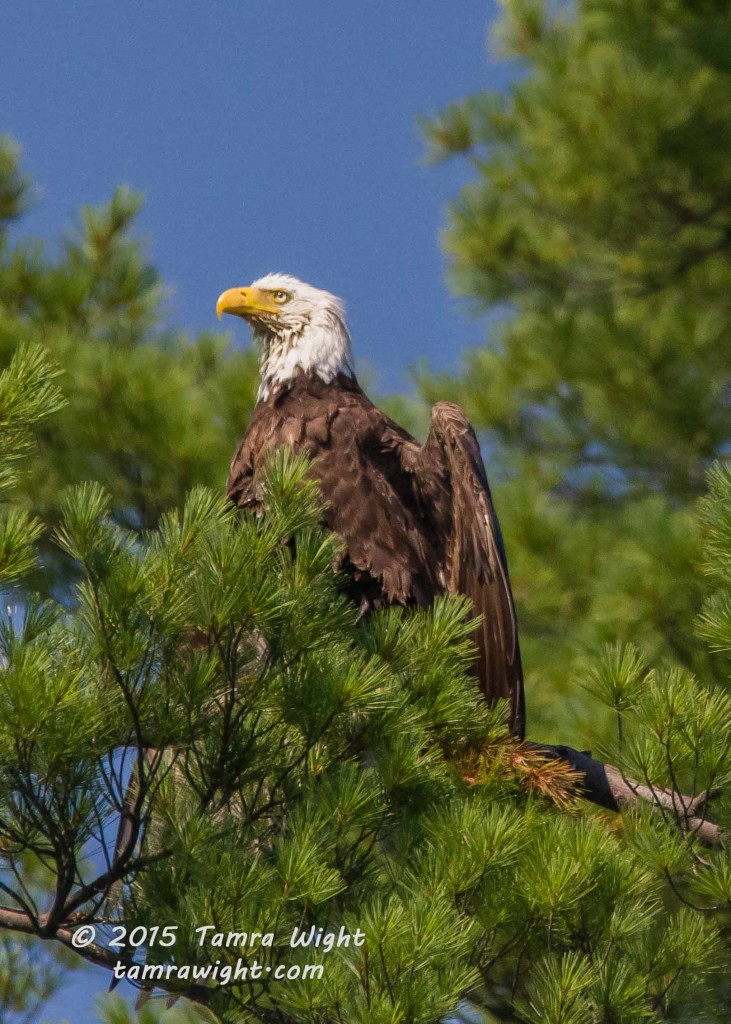 Landing on a branch, almost directly above my head, it spread its wings, and left them there! In the back of my mind, I realized I’d read about this while doing research for Mystery of the Eagle’s Nest, but it was a first for me to see it. 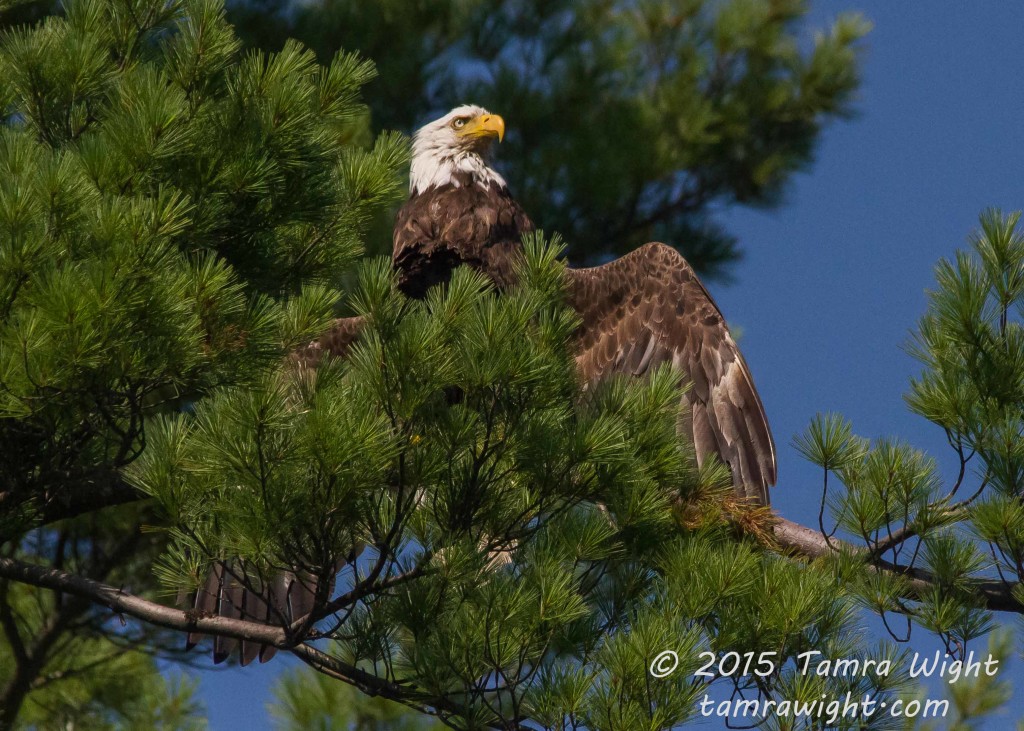 I sat in my kayak, watching this photographic eagle for forty minutes!  Mostly, it stayed in that one pose. Eventually though, it began to preen . . . . 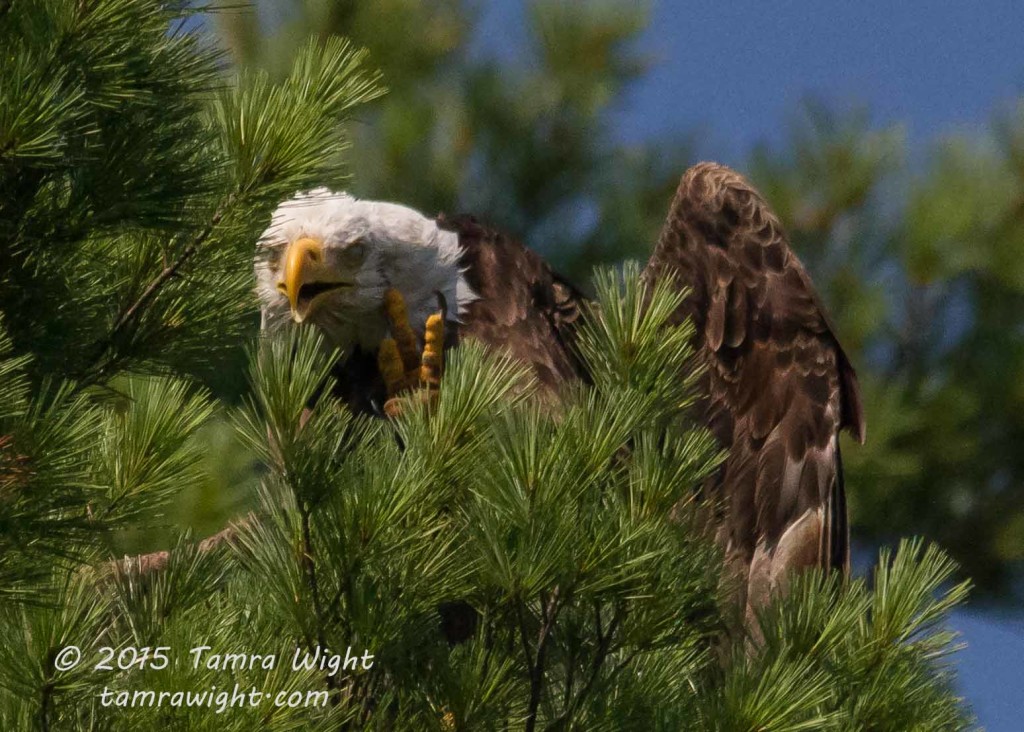 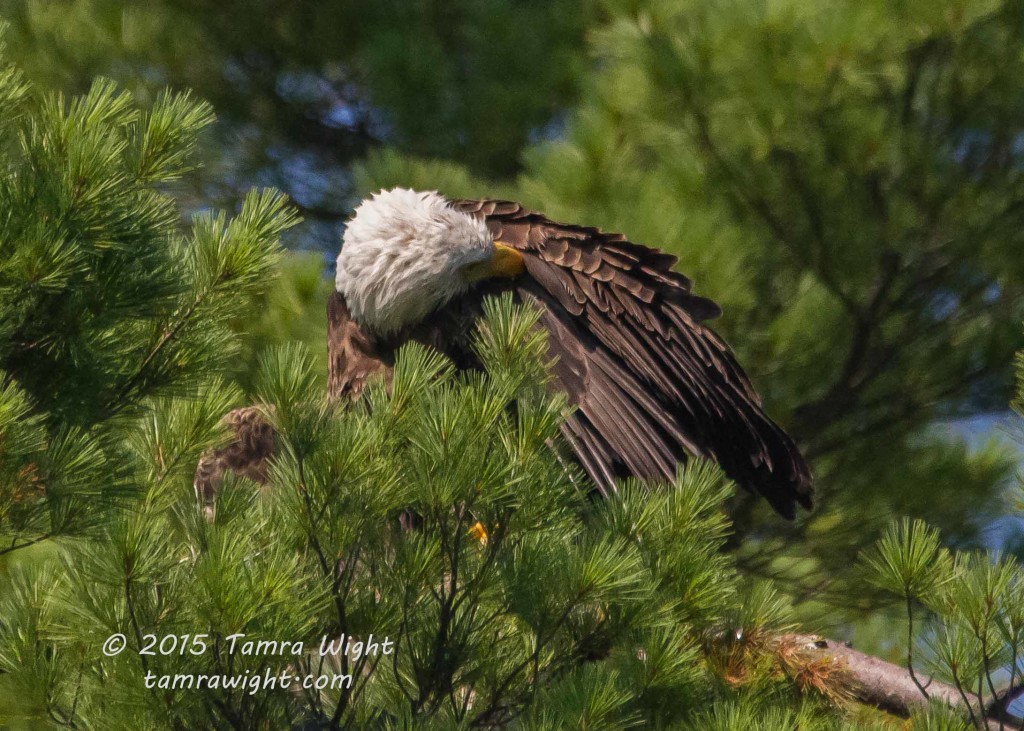 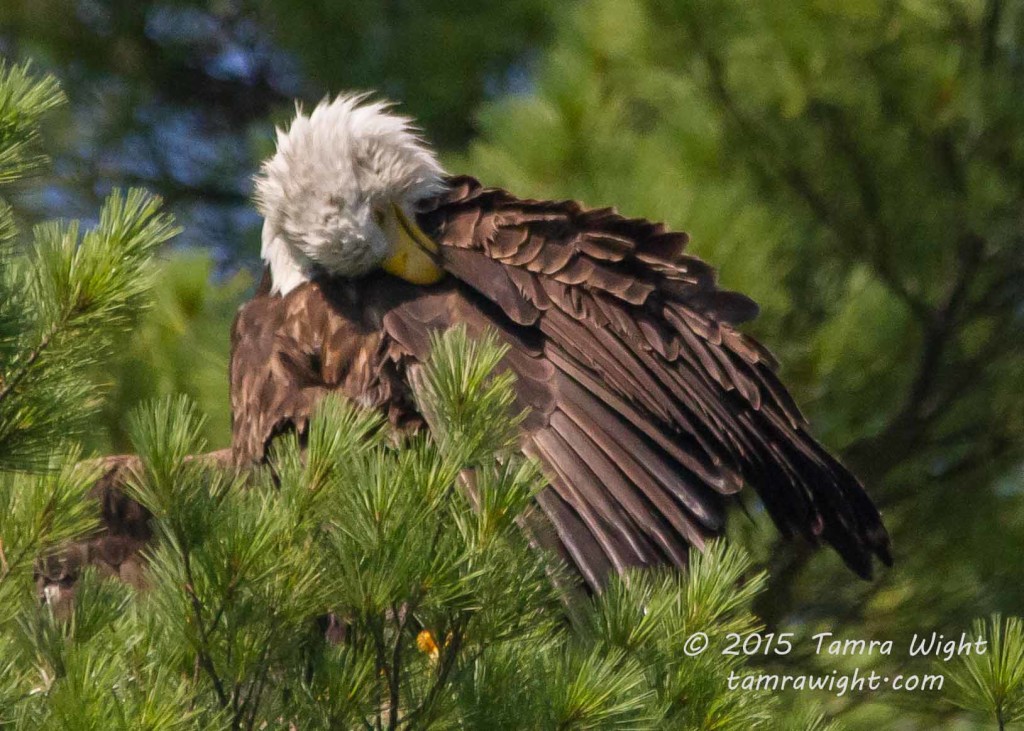 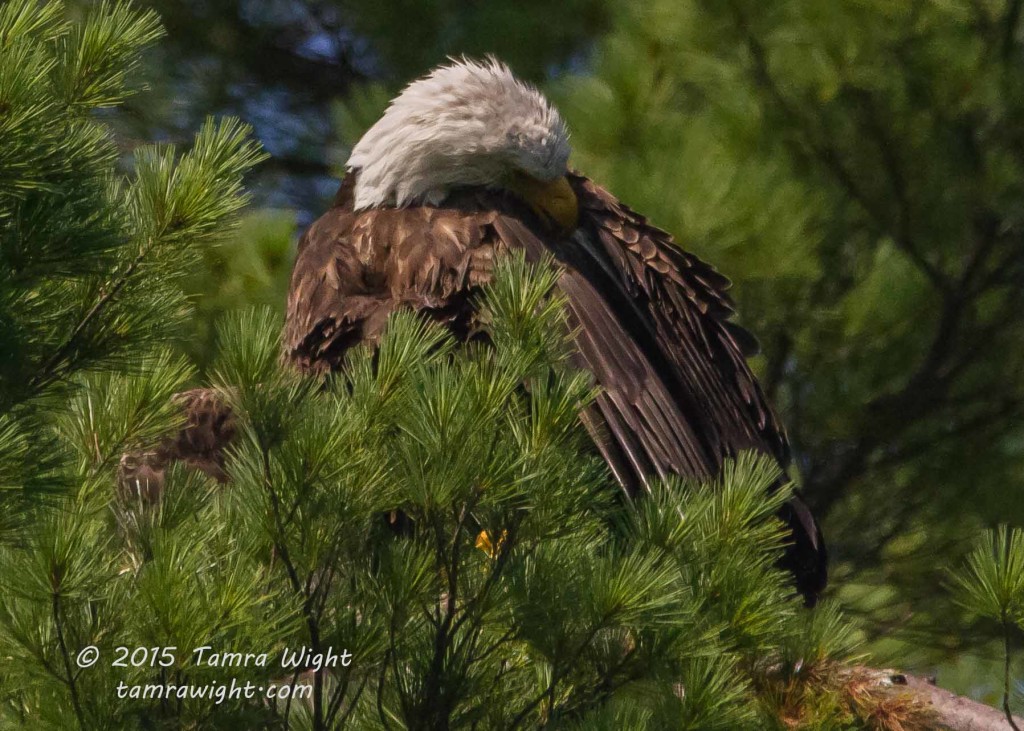 Before hanging its wings again. 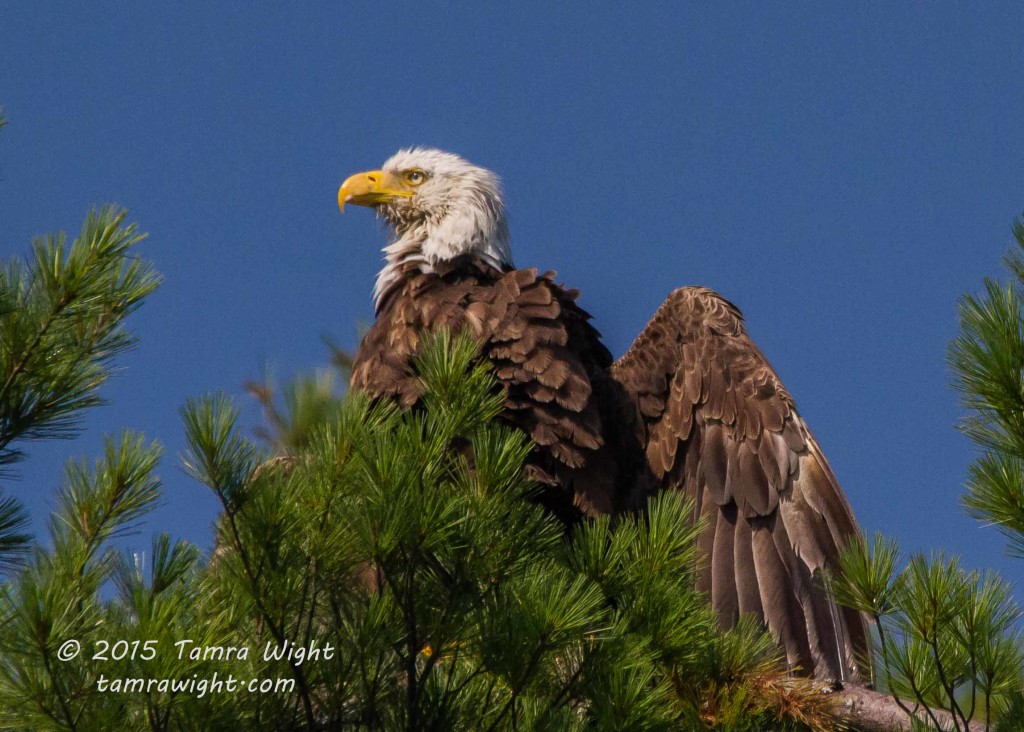 They’re so regal looking, aren’t they? 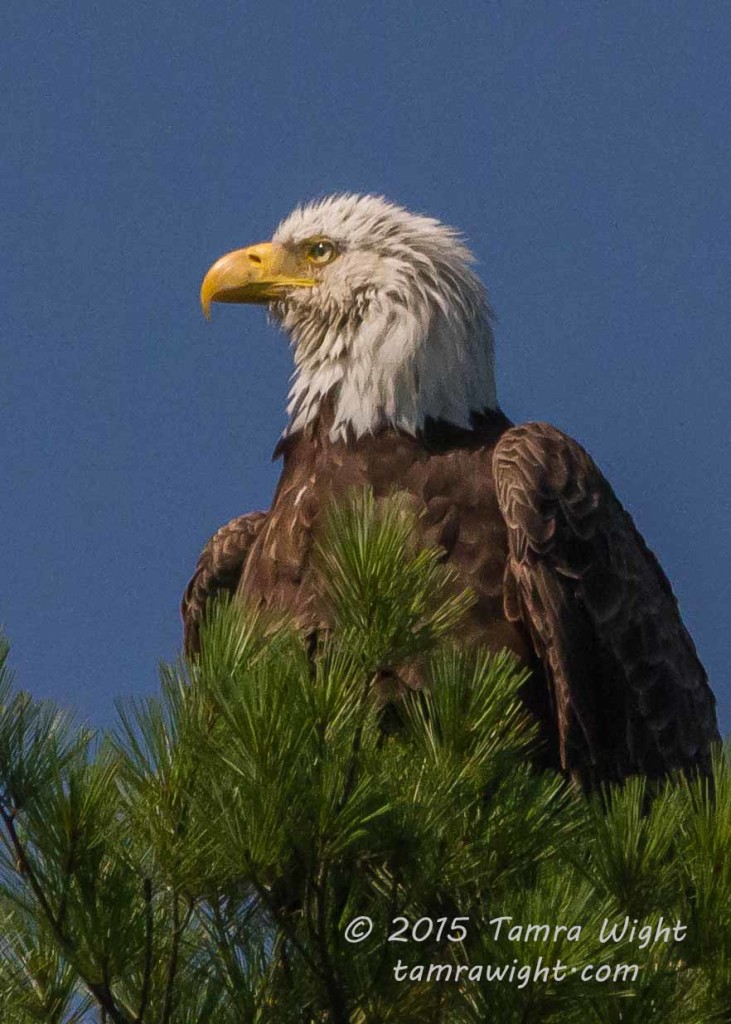 Right now, in October, November, the eagle pair do still hang around the lake. Just last week, I wandered to the shoreline for sunrise photos, to find them adding branches to their nest! 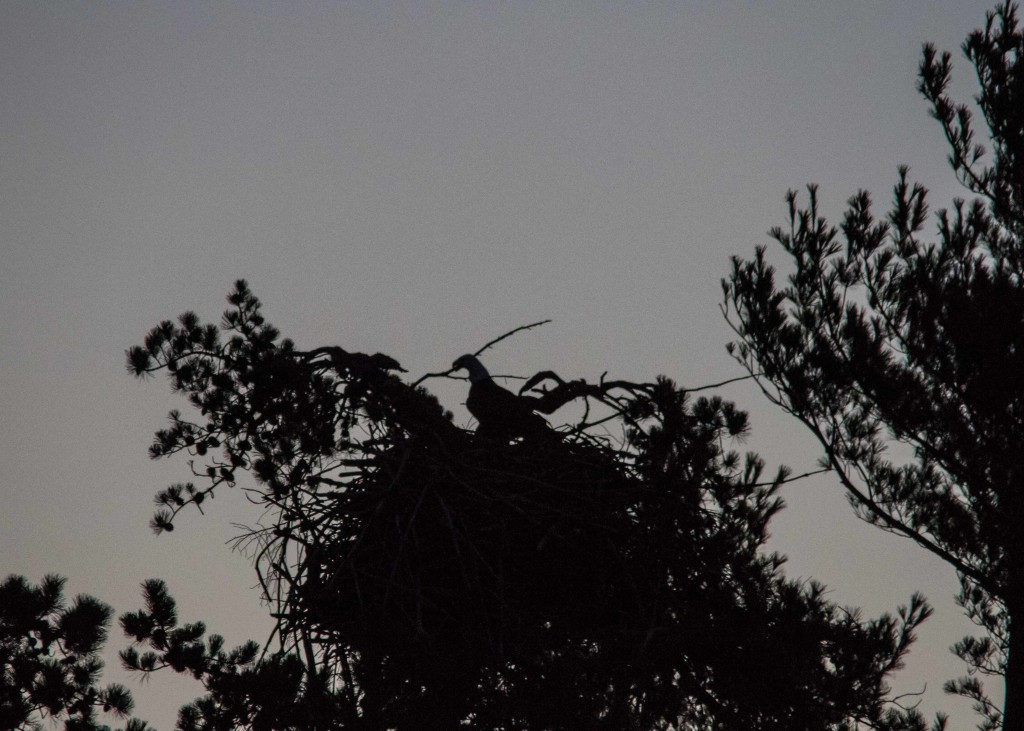 They will come and go for the next couple months, with me not seeing them for weeks at a time. But when I do, I’ll post photos here and on Facebook. In mid-January, I usually have to don my snowshoes to get to the edge of the lake to see them. In March, the pair stay closer together, near the nest, and I see them every time I trek down. If I’m lucky, I’ll even witness  them mating, which is  a sure sign we’ll be having chicks.

By mid to late March, or early April, we typically find one eagle sitting down in the nest, with just the tip of her white head showing. This means they’re on the eggs for the next 35 days.

During the very last week of April or first week of May, my campers and I point our cameras toward the nest, hoping for a sign of little gray chick heads bobbing up and down. They aren’t able to hold up their heads until they’re about two weeks old.  At this stage we’re looking to snap pictures of two or possibly even three, gray heads up all at the same time as proof of how many chicks we’ll be following that summer.

Click on the Eagle tag on the right, and you’ll see previous years posts showing their nesting.

Come back often this winter and I’ll keep you posted on this years chicks! I love sharing my findings with all of you.  If you have questions, please feel free to contact me.