My Adventure Begins – My Loon Watch

My story begins back in May. School was in session, the campground had opened and I was struggling to find time to write. But still, I managed to sneak out in the kayak a couple times to check on our one pair of nesting loons. 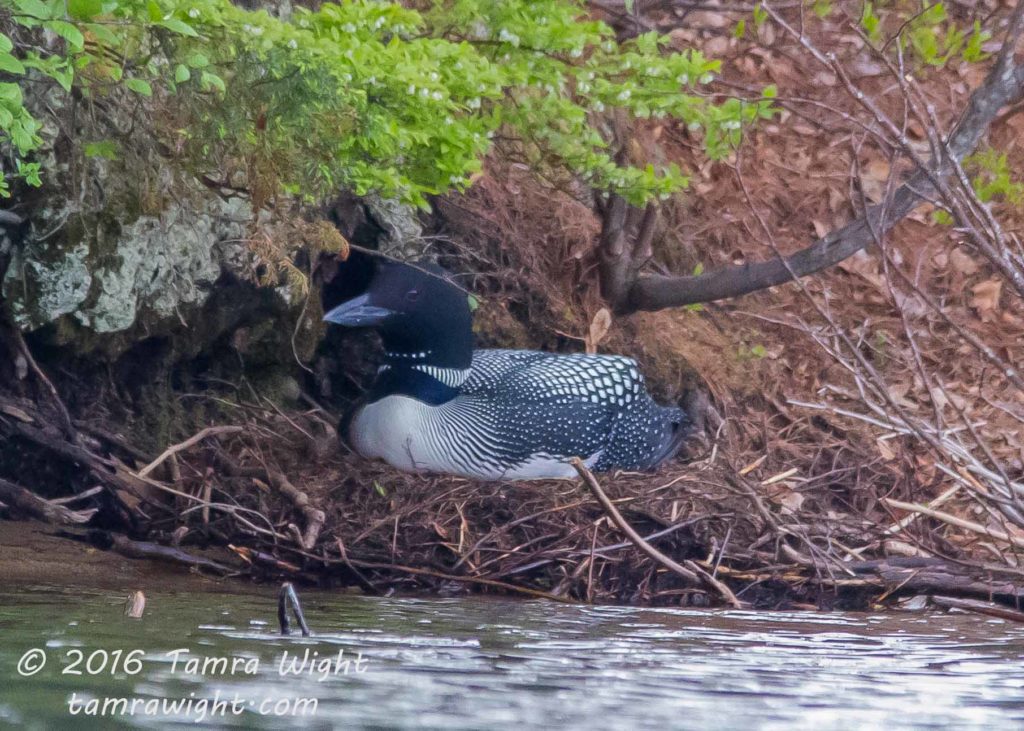 As they had for many years, the pair had chosen a spot in the shadows at the bottom of a banking on the shoreline. But it was also a spot where they’d been unsuccessful for the last six years or so.  In fact, for three of the last four years, the eggs hadn’t hatched at all. This year however, everyone on the lake was hopeful. The loons seemed to be doing well. With one week to go, I had high hopes this year would be *the year*.

Memorial Day Weekend worried me though. Lakes go from very quiet, to extremely busy overnight. Lower Range Pond is no exception, even with its 10hp limit. I managed to get out on the lake early Saturday morning of that weekend to find the loons were doing fine. I even witnessed the loon on the nest turn one olive colored egg.

“Not two?” I wondered. But then again, one was all we needed for a successful nesting.

Late in the afternoon on Monday, after most of the campers had checked out, I paddled out again. I rounded the corner of the shoreline and raised my camera.  Using my 500mm lens like binoculars, I focused.

There were no loons on the nest.

I looked again. I scanned the area. The pair were in the water together, which was not  unusual, they do this from time to time for 5 minutes or so while switching places on the nest. But five minutes passed. Then seven. And they were swimming further and further away. Seeing the homeowner nearest the nest getting onto his pontoon boat, I raised a hand in greeting and we met in the middle of the lake.

Both of us watching the loons wander away, he told me that overnight, the loons left the nest. No traces of the egg I’d seen on Saturday were left. There were no clues. 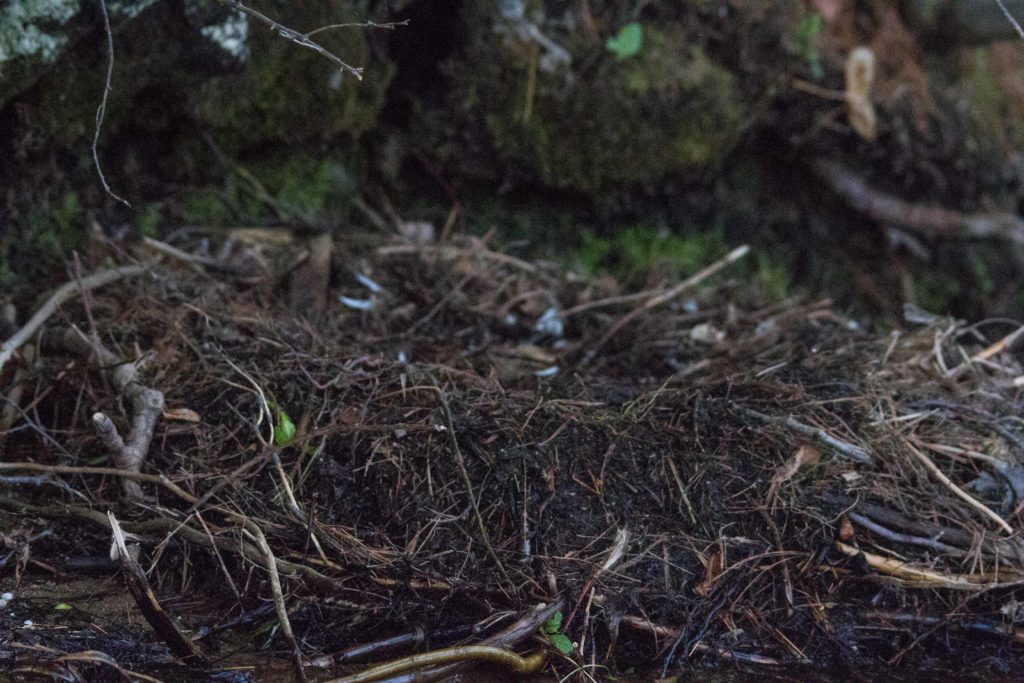 Had a mink or weasel gotten the egg?  Had the loon been scared off the nest and kicked the  egg out in its hurry? It was a mystery.

“But the loons have been circling the area all day,” he assured me. “Maybe they’ll nest again.”

I could recount the many times I went out on the lake over the next couple weeks, looking for signs of nesting. And failing to find those signs.

And I could tell you stories of the times I didn’t see the loons at all.

But let’s skip ahead to June 15th, when I rounded that corner and saw a flash of white. I raised my camera, zoomed all the way out, and saw this. 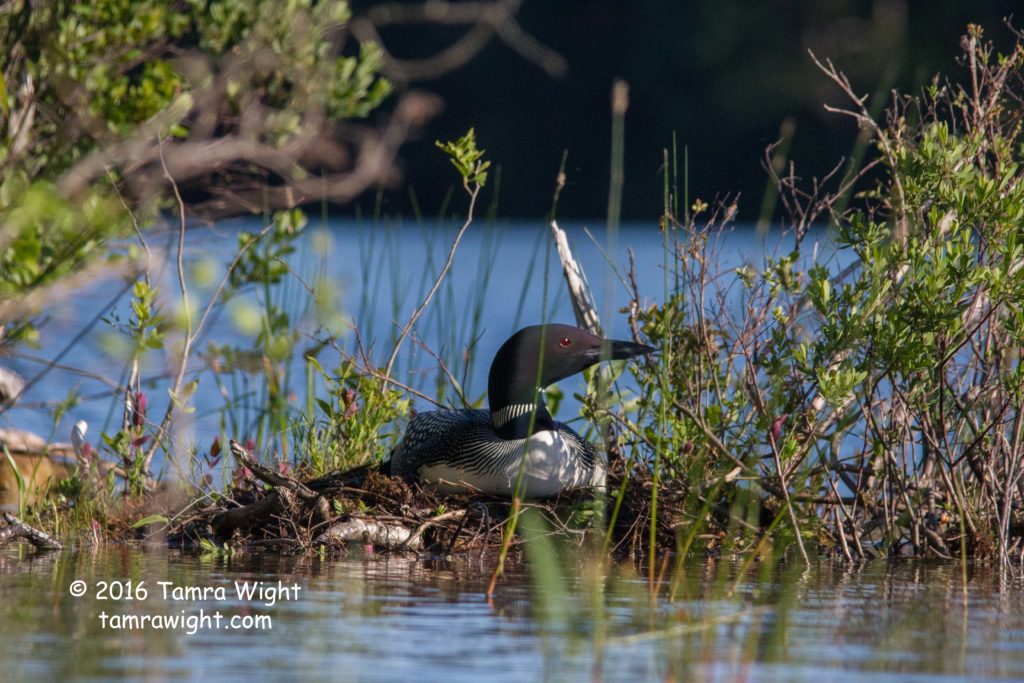 A bright sunny spot, visible from three sides, it was a little further away from my friend-on-the-lake’s home.  If the loons couldn’t successfully hatch eggs while hiding in the shadows, why would they pick this spot?  A spot where they could be seen by every kayaker and canoer, paddleboarder and fisherman on the lake. 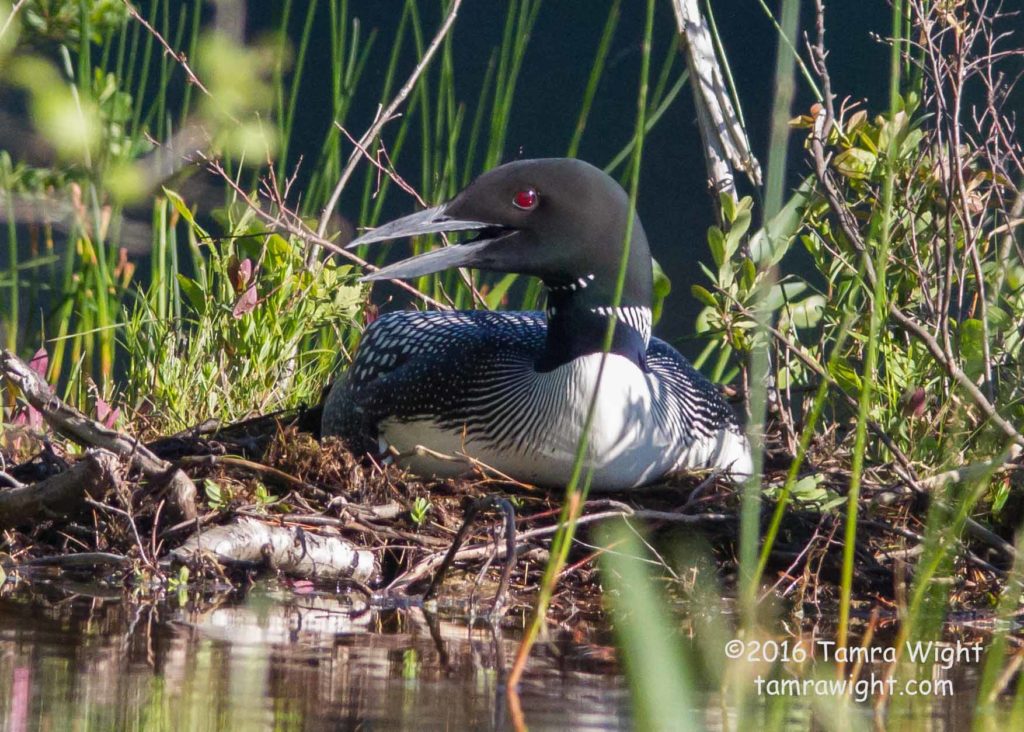 A nest easily accessible to eagles and their young that were just about to fledge.

It sure was a beautiful spot though. Speaking with a photographers eye, it was perfect. Unlike May nesting, June nesting had greenery. The sun rose at the perfect angle and there was blue water behind her instead of a dark banking.

I called my friend and told him right away. He gave me permission to use his dock and land so I wouldn’t have to take photos from a rocky kayak.  “Let’s find out why they haven’t had chicks,” he said.

So I began my mission to document a full nesting period of the loons.  Coffee in one hand and my camera in the other, I paddled out almost every morning at 6am to start my day.

Just me and the loons. 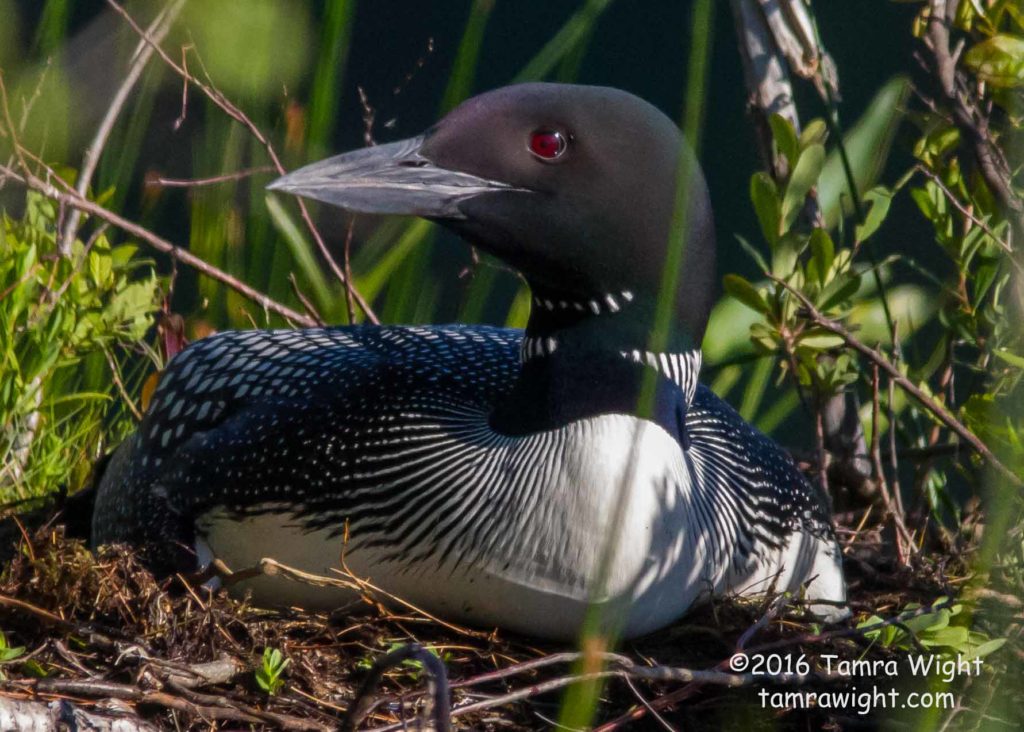 I chose not to get out of my kayak, instead staying as low as possible.  These photos look like I’m very close, but I had my 5oomm lens zoomed all the way, and then I cropped the photos some more back at home. What a difference it makes in the sharpness of your photos when you have calm, windless mornings and/or a shallow area to rest upon.

You might think that watching nesting loons would get boring after awhile. I mean, how many photos like the ones above can you take? (I, of course, took hundreds!)

But there’s more to nesting than that. In the first week alone, I watched the adult move sticks from here to there . . . 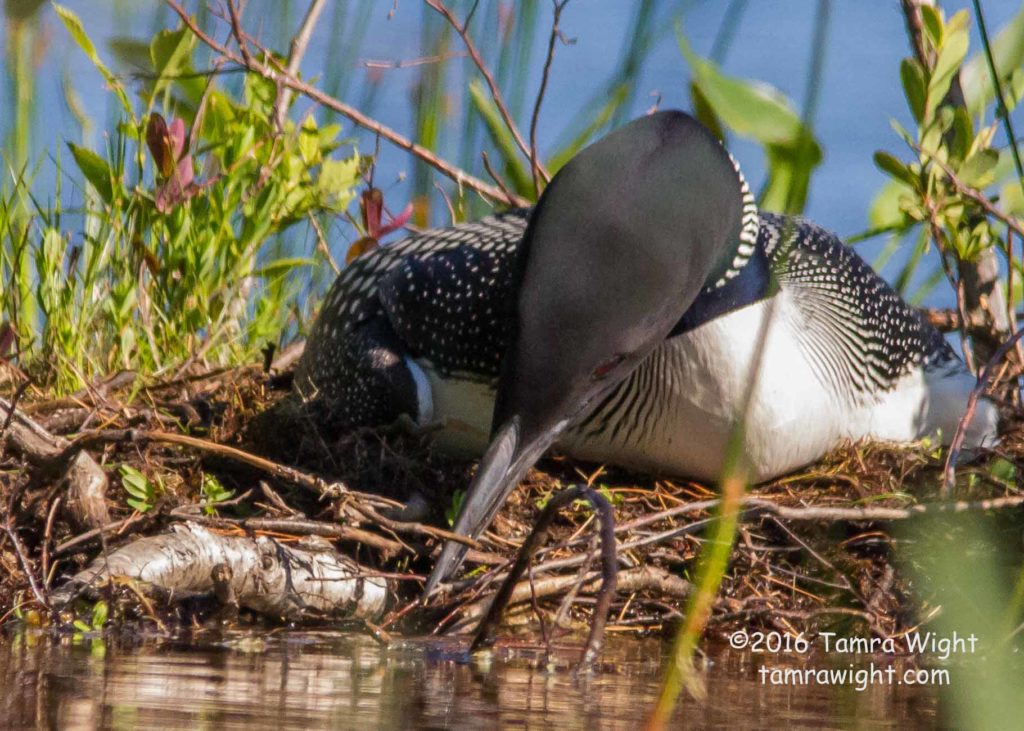 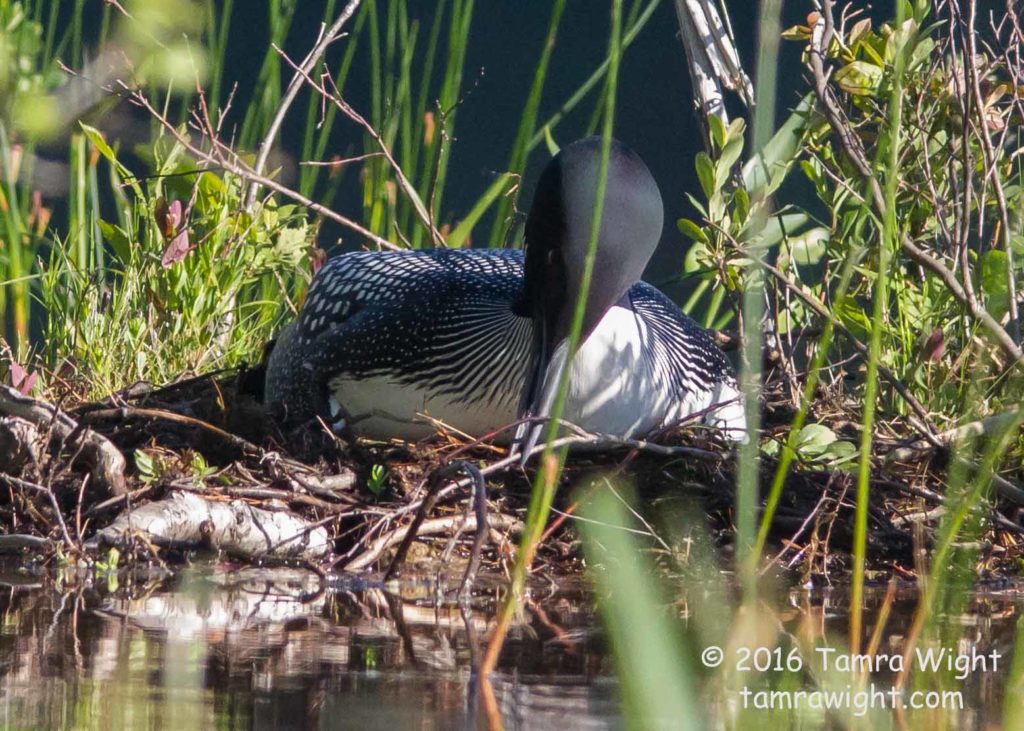 I watched them check the air for predators continually . . . 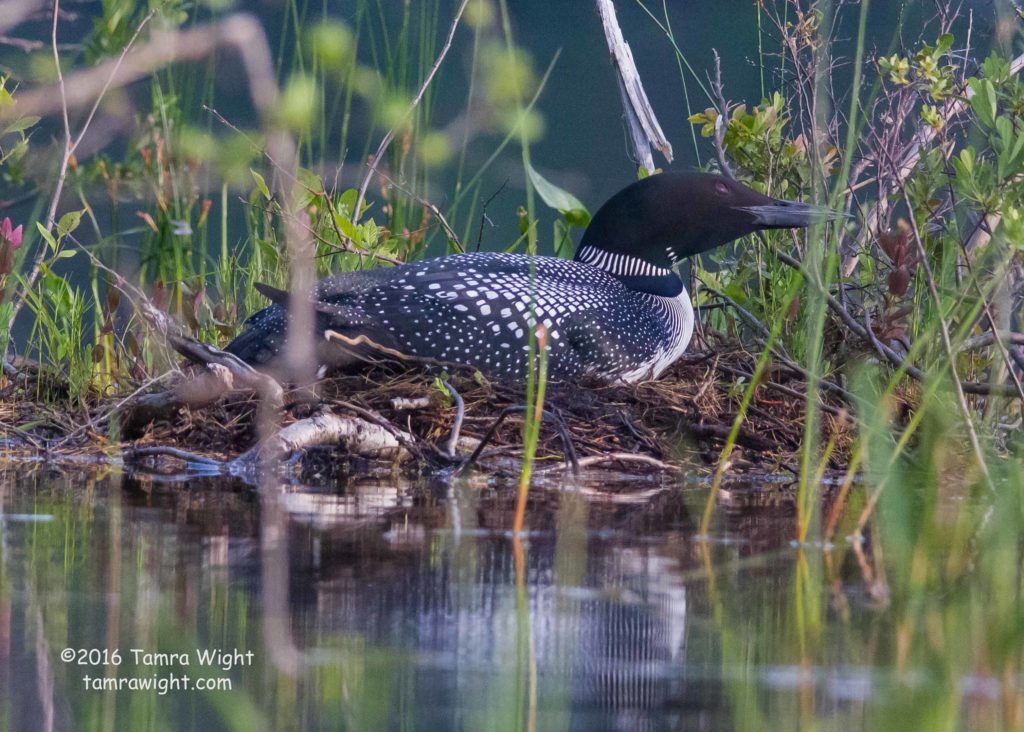 And on the second day, I watched them turn two olive colored eggs with their very sharp, very long beak. 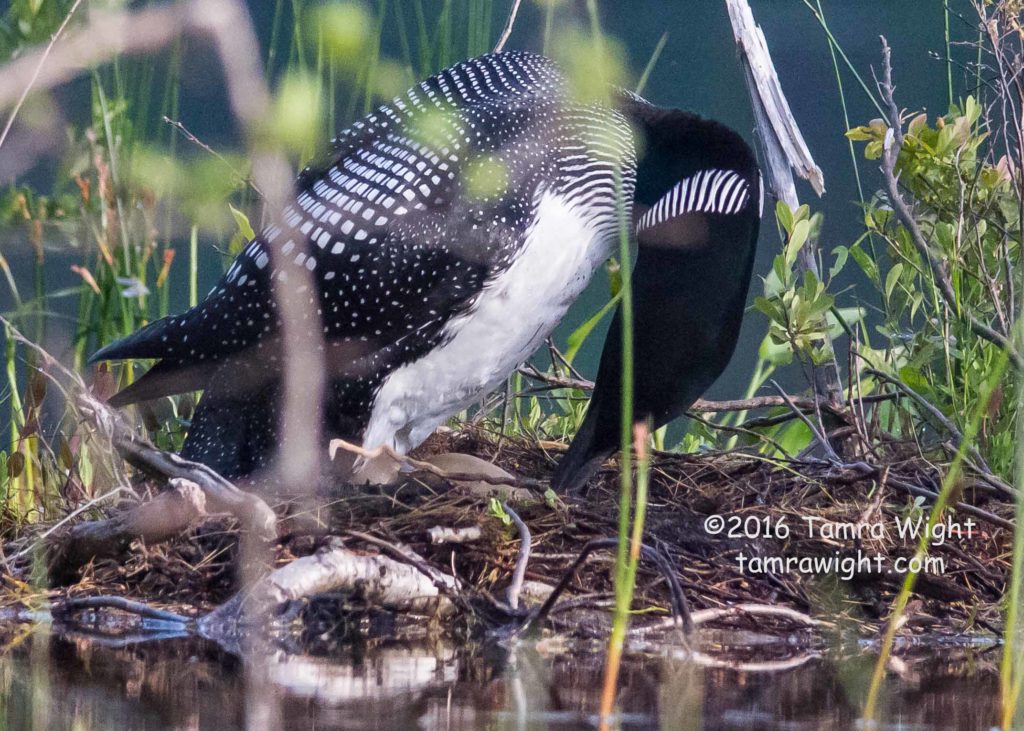 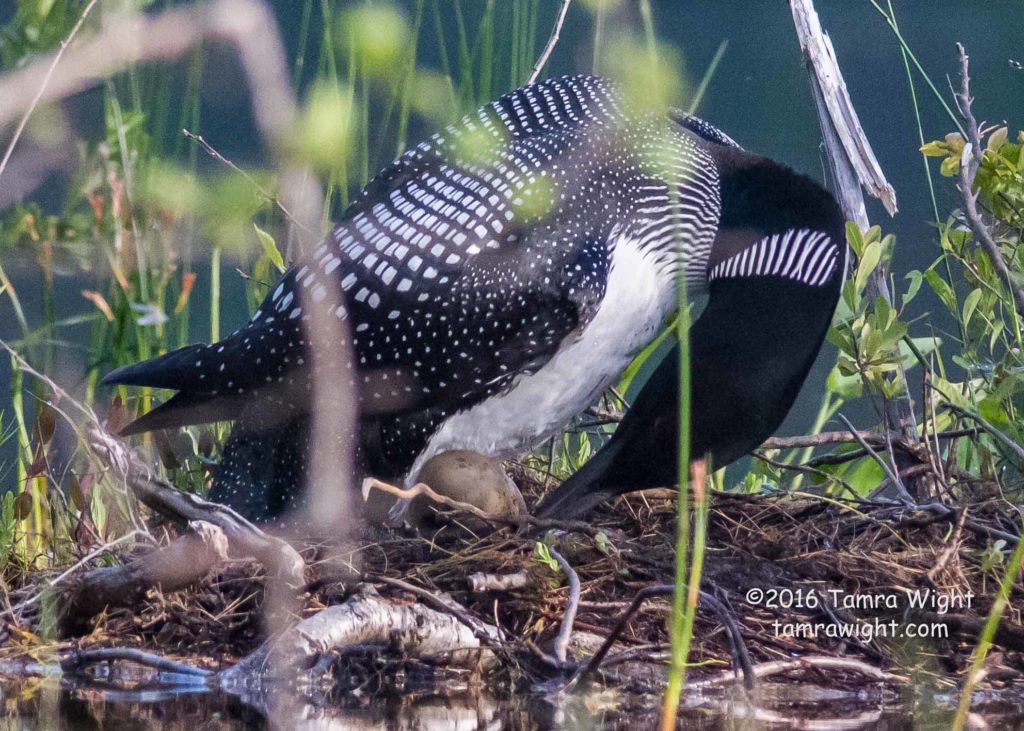 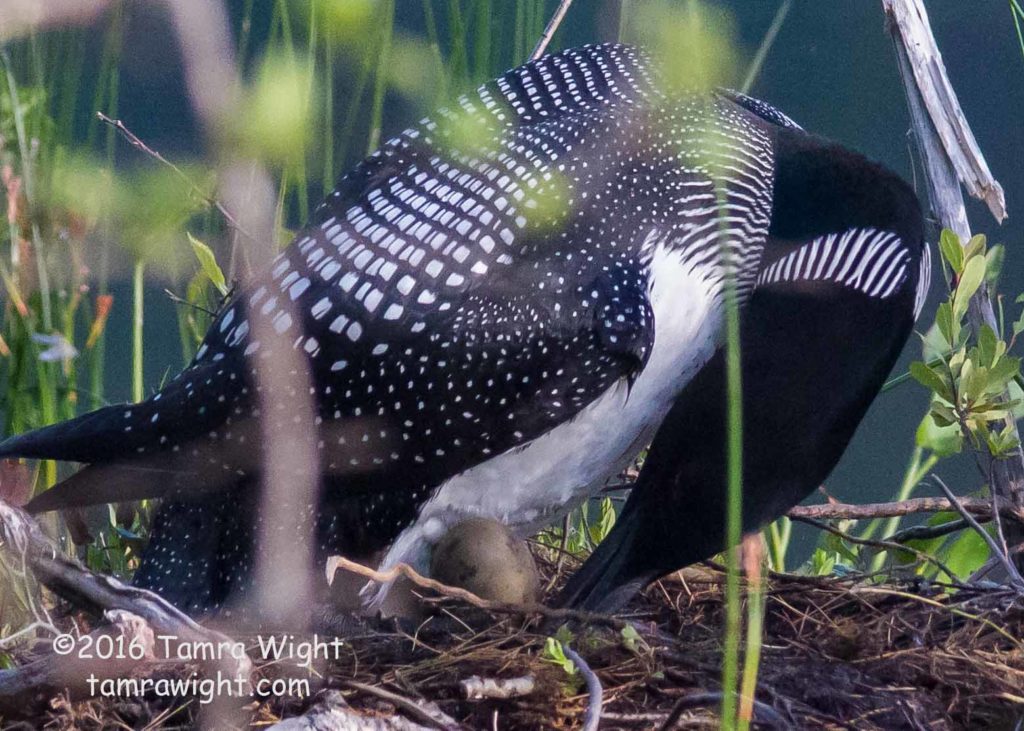 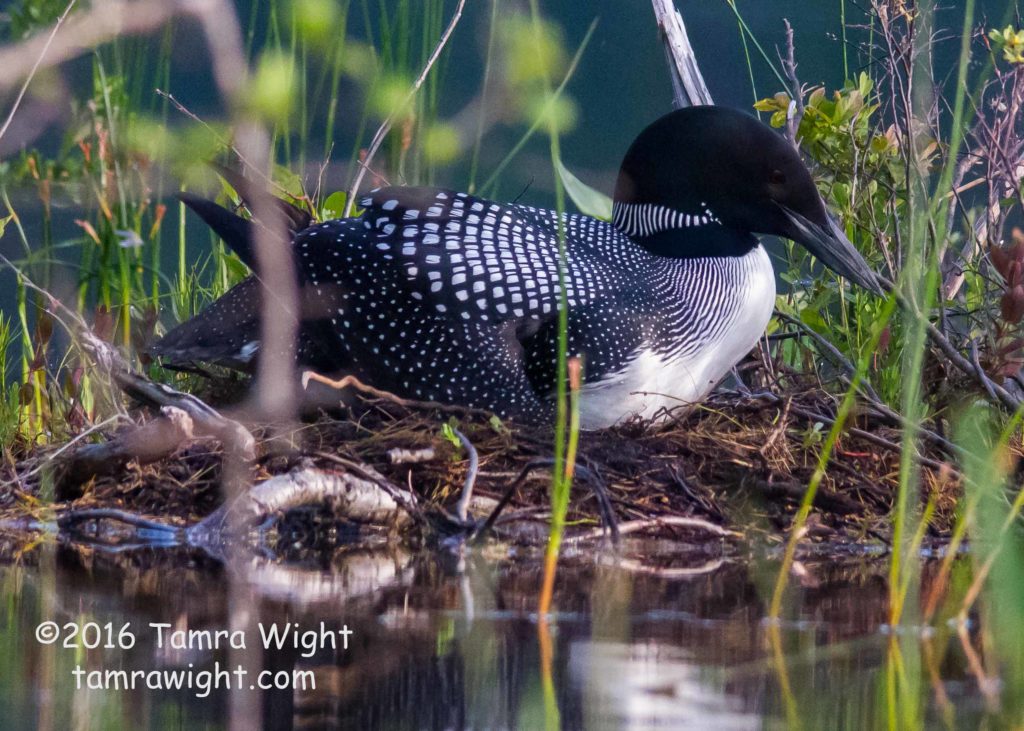 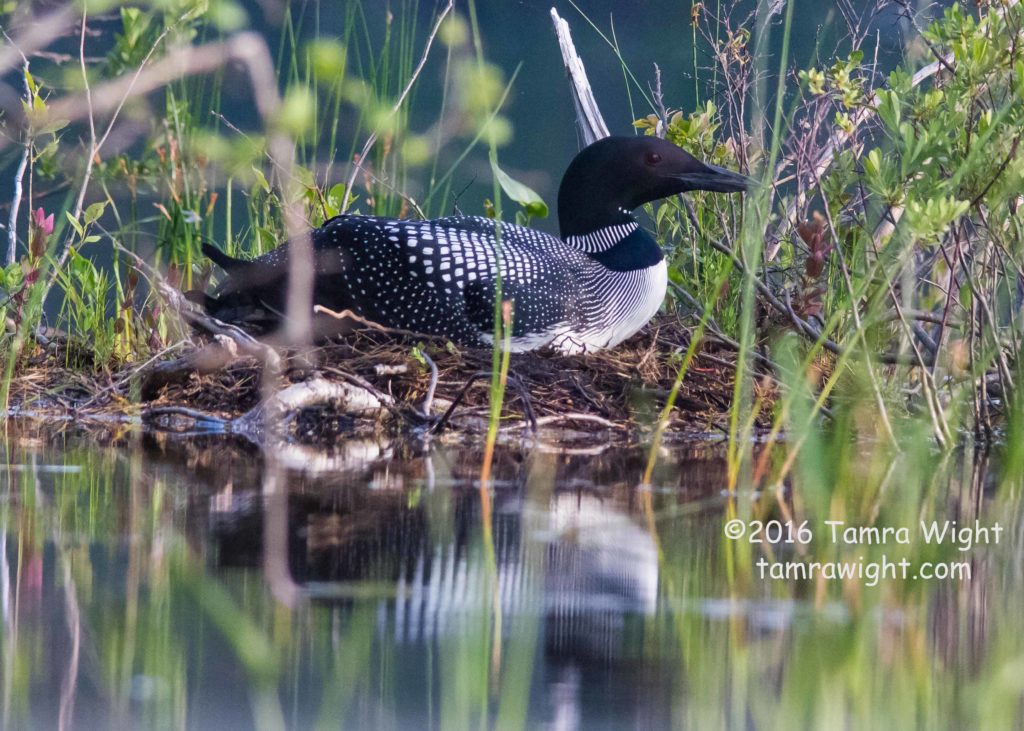 Two!  Two eggs!   I was hooked.  I marked the days off on my calendar, and made a decision not to post on social media until the eggs had hatched. 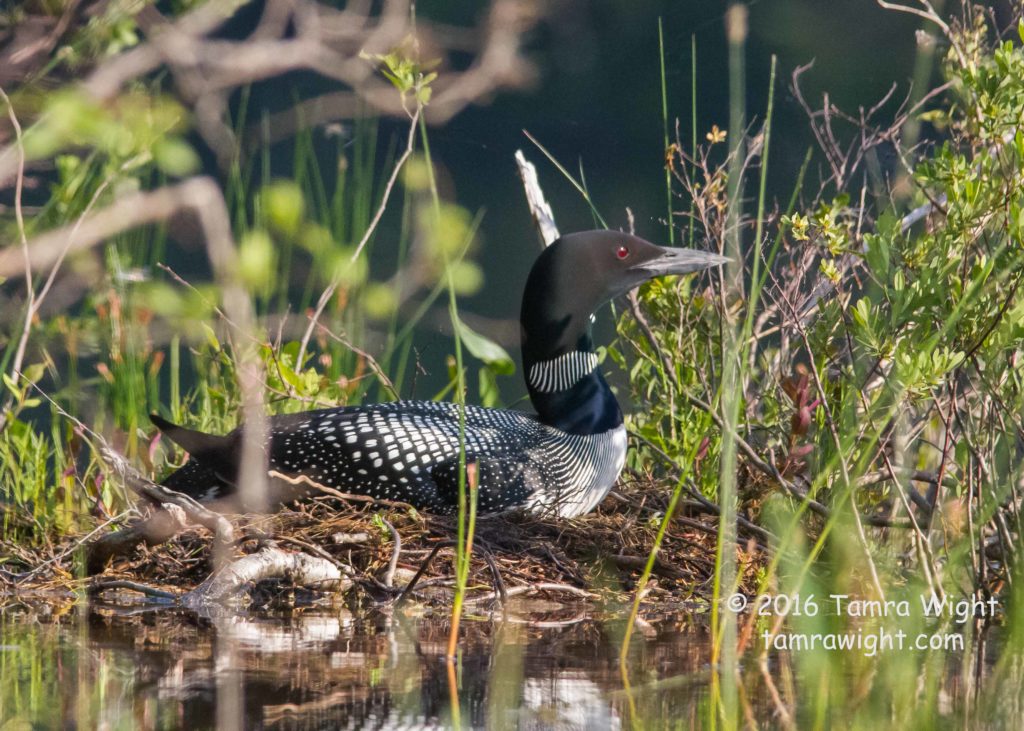 I wanted to give them the very best chance I could.

Through the next few blog posts, I’ll tell tales of what I learned about loons through watching them from my kayak, over coffee, in the first light of day. Teachers, feel free to use these photos and tales in the classroom with Cooper and Packrat’s first adventure, Mystery on Pine Lake, or with other nature books, such as Cynthia Lord’s, Half A Chance.

Up next:  Switching places on the nest