Summer is slowly coming to a close, the nights are getting cooler and in a matter of weeks, some of my favorite wildlife will head for warmer climates.  So every chance I get to wildlife watch, whether by foot or by kayak, I take it!

For the last two weeks, I’ve noticed a frequent visitor to the pond . . . 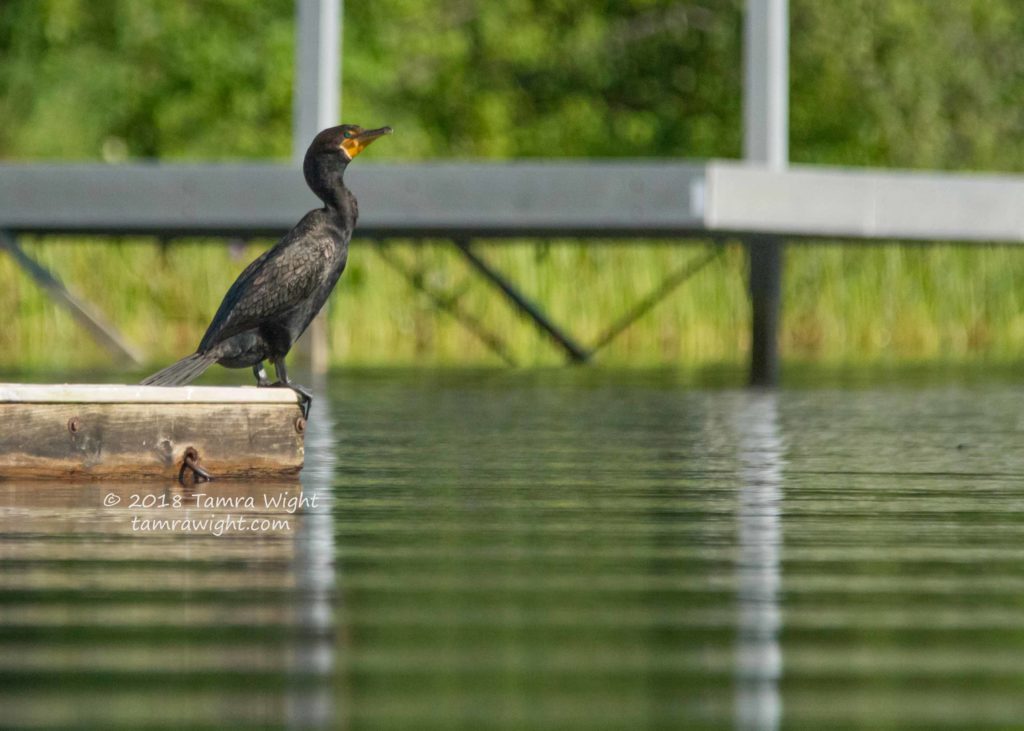 If you look back in my posts, you’ll see that a cormorant (perhaps this one!) was one of the first birds I encountered on the lake by kayak this Spring.   It was perched on a tree branch, which is not something I see every day! Especially when it “hangs” its wings to dry them.

Lately, I see it perching on docks.  Which is where I found it last Monday. 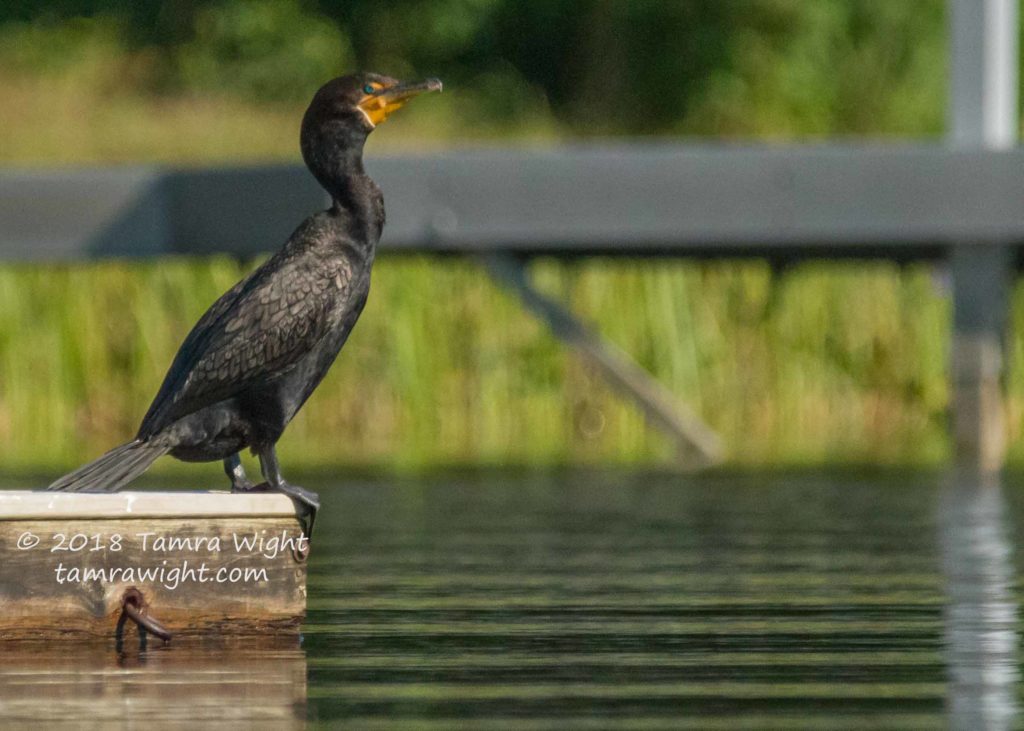 This was quite a treat, because normally I only see it as it glides through the water past my dock, diving now and again for its next meal, much like a loon.  In fact, at first glance from a distance, you might think its a loon. It’s about the same size.  It has a long neck like a loon. It’s sleek and dives silently.  But as you can see from my photos, the cormorant’s bill is yellow with a hook in it, which helps it catch its prey (mostly fish).  Its eyes are blue and there are no white markings like this loon. (Which I also saw that day) 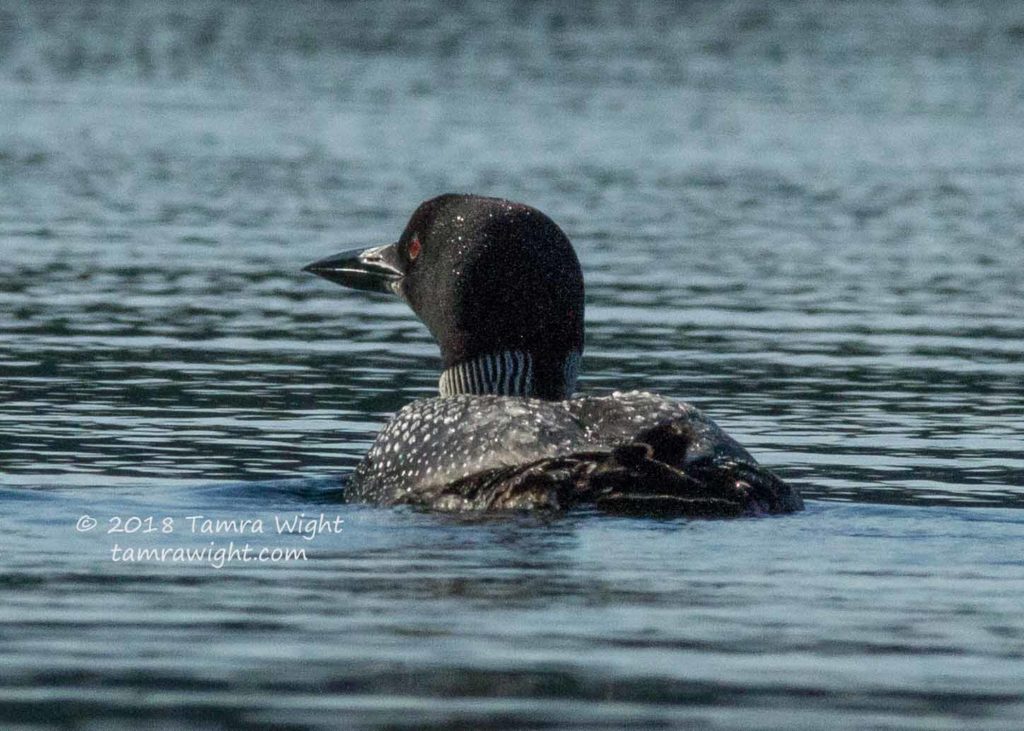 In my experience, cormorants tend to be a little skittish. So when I saw this one perched so prettily on the dock of a neighbor, I stopped paddling long before I was close enough to lift the camera to take photos. I just watched and let the wind drift me closer and closer.  I’d probably taken 30 or so pictures, when the cormorant stiffened.   I thought maybe it’d seen me, and I poised myself to take some rapid fire flight shots.  Then it tipped its head back to look upward. 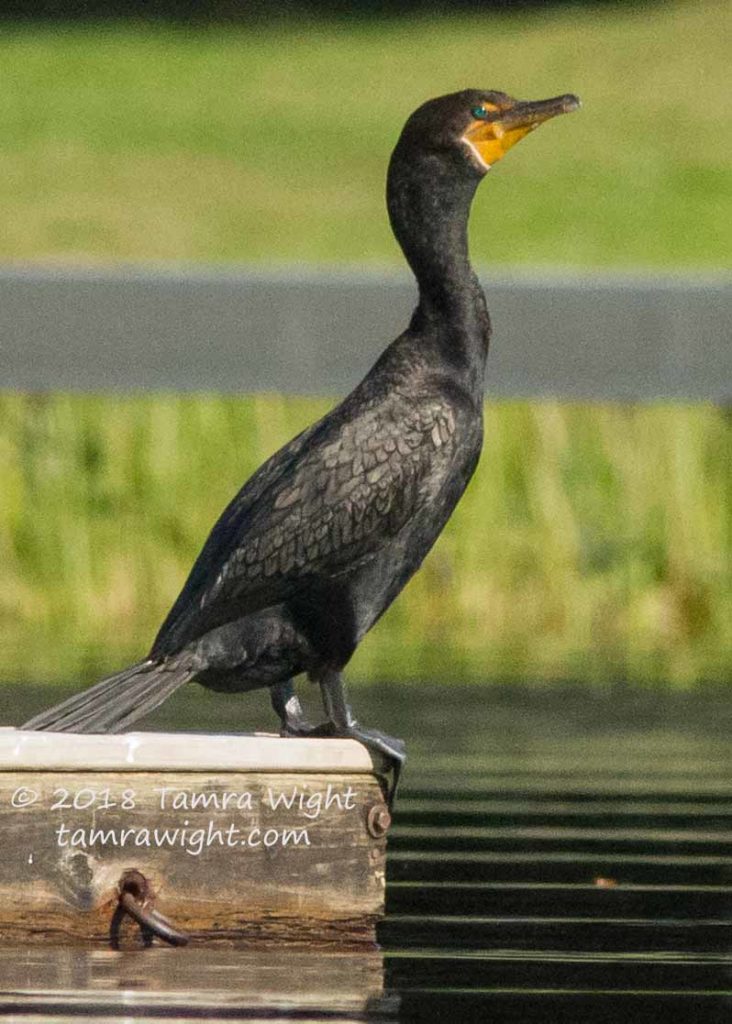 When our visiting heron came soaring over the treeline, I realized the cormorant had seen it (or heard it) long before I had.  I swear it even ducked a little.  I don’t blame it though, look at the heron’s wing span! 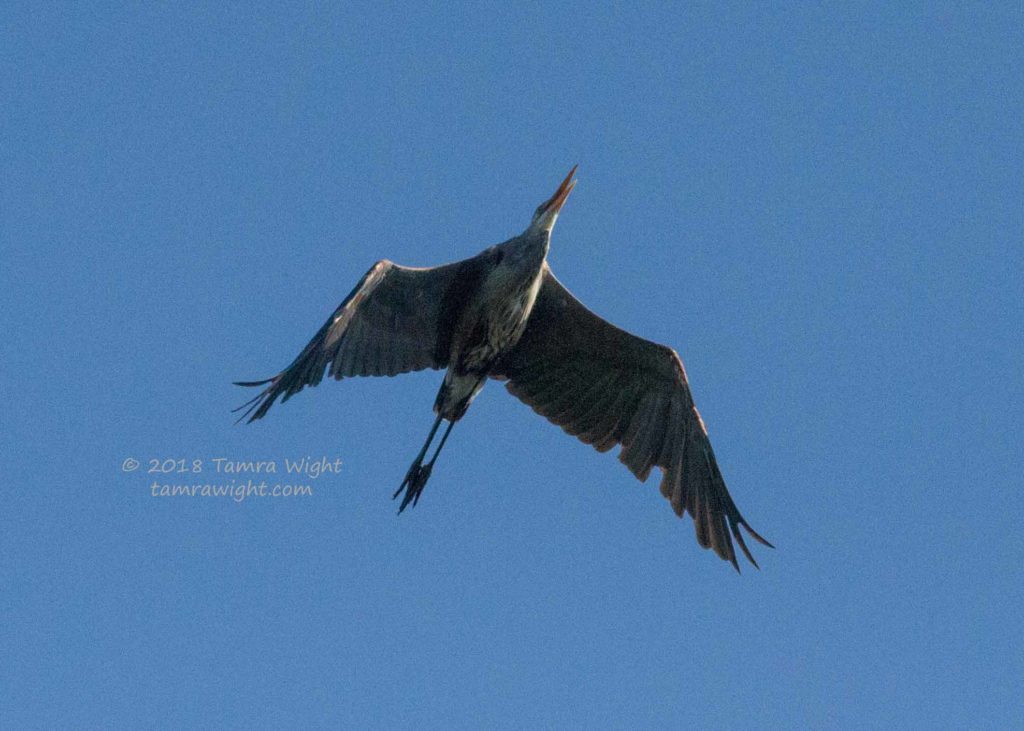 This heron went all the way to the other end of the lake, where it likes to forage in the grasses. 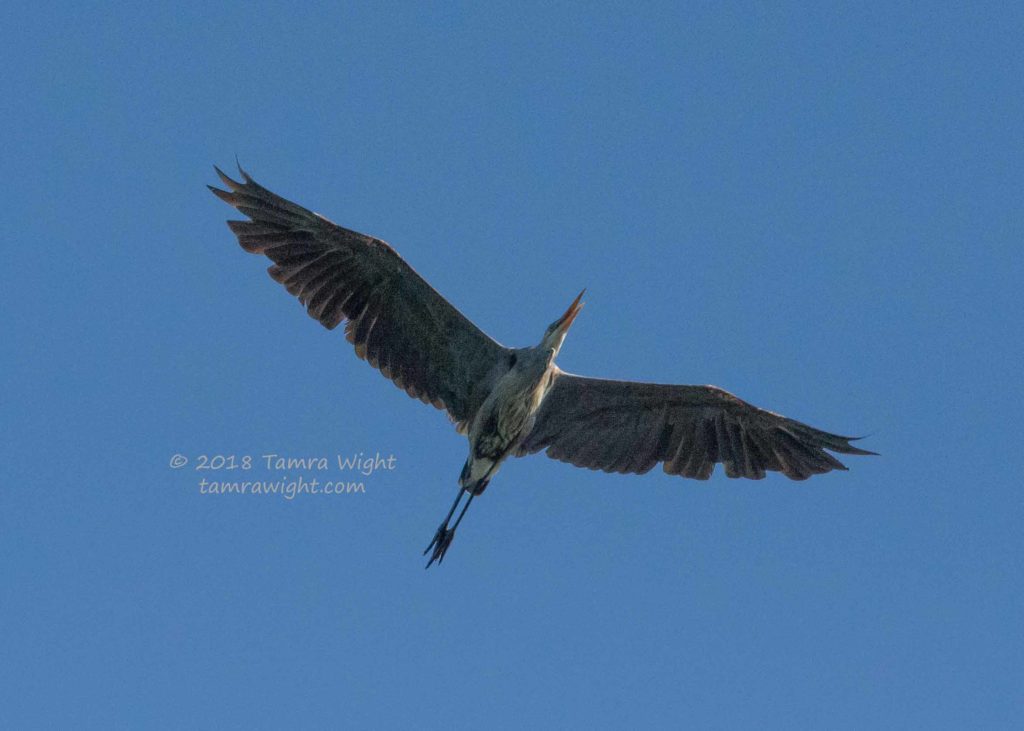 I turned my camera back to the cormorant and took a few more photos.  Then a few more. 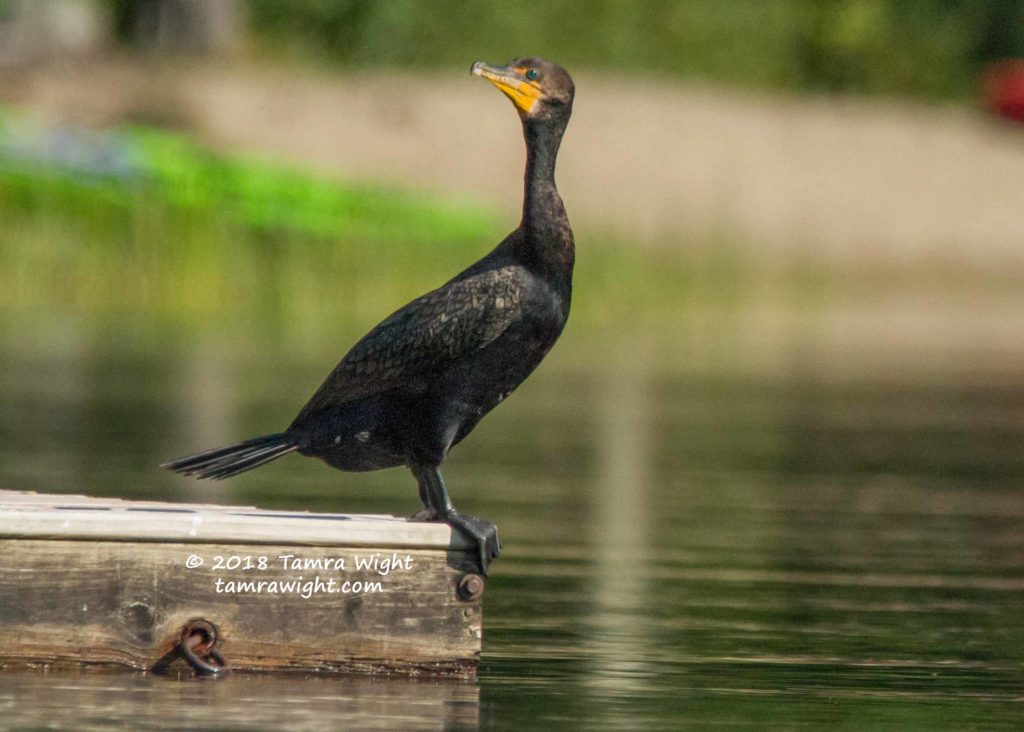 All of a sudden, with no tell-tale warning signs at all, the cormorant leaned forward and half flew, half fell off the dock. It did it so fast, I couldn’t even catch the moment.

But I did catch it hopping across the water flapping its wings . . . 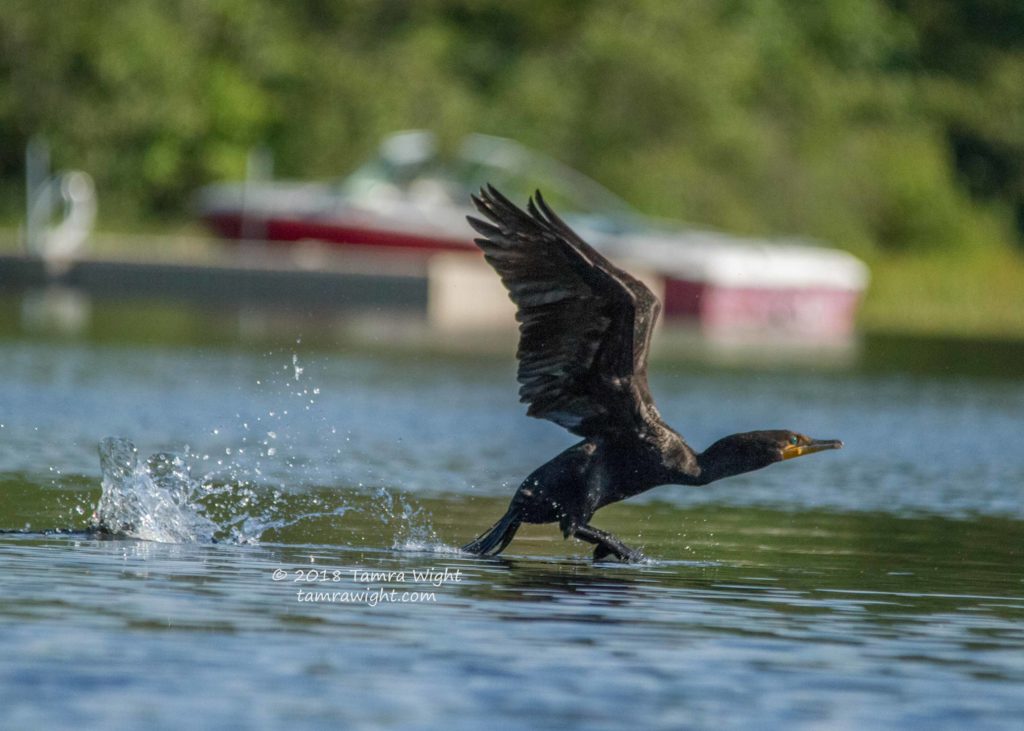 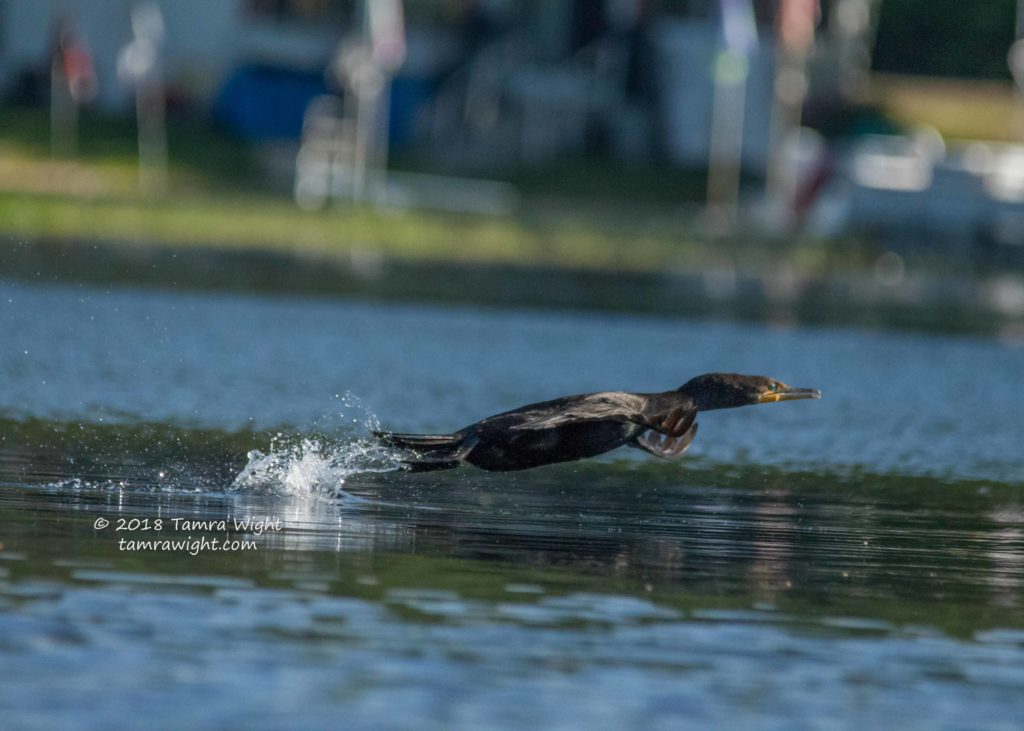 as it made its way across the lake from me. 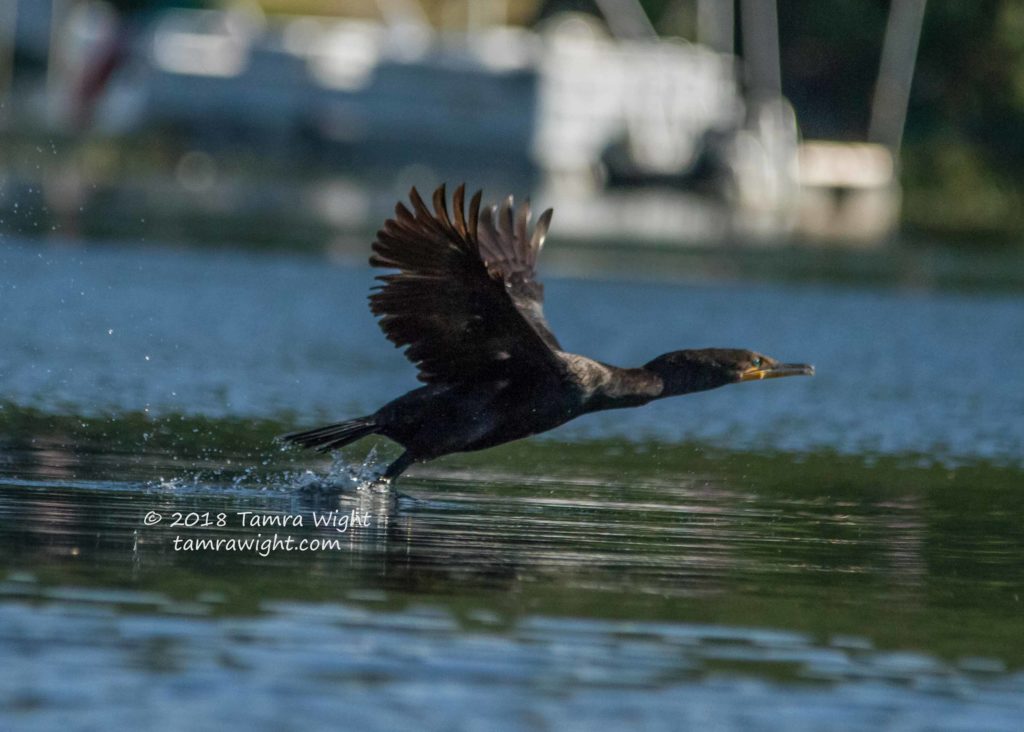 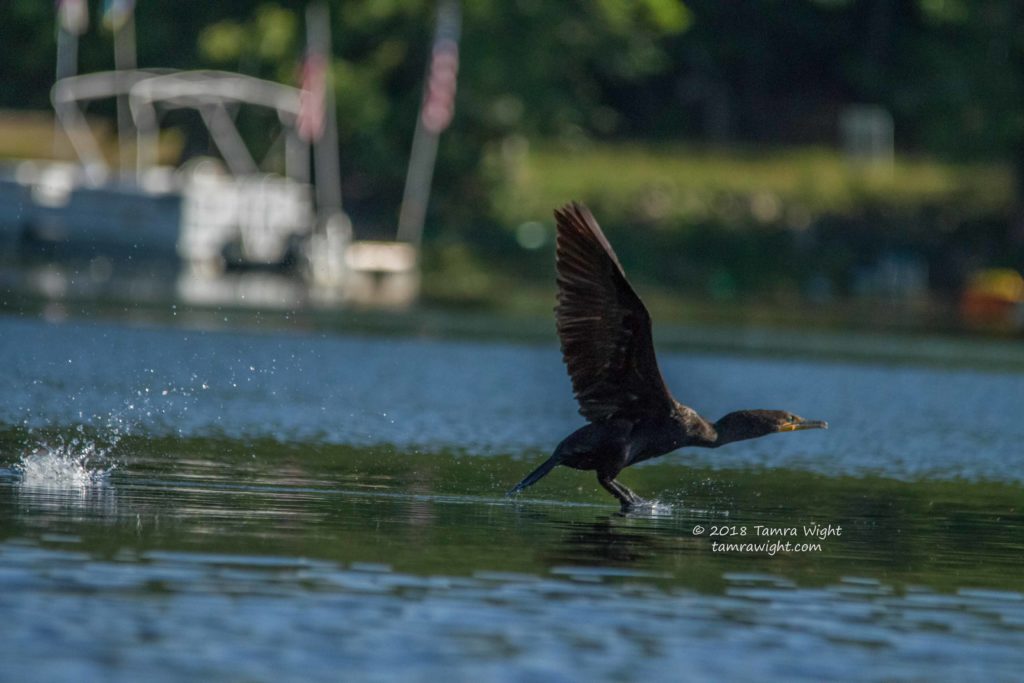 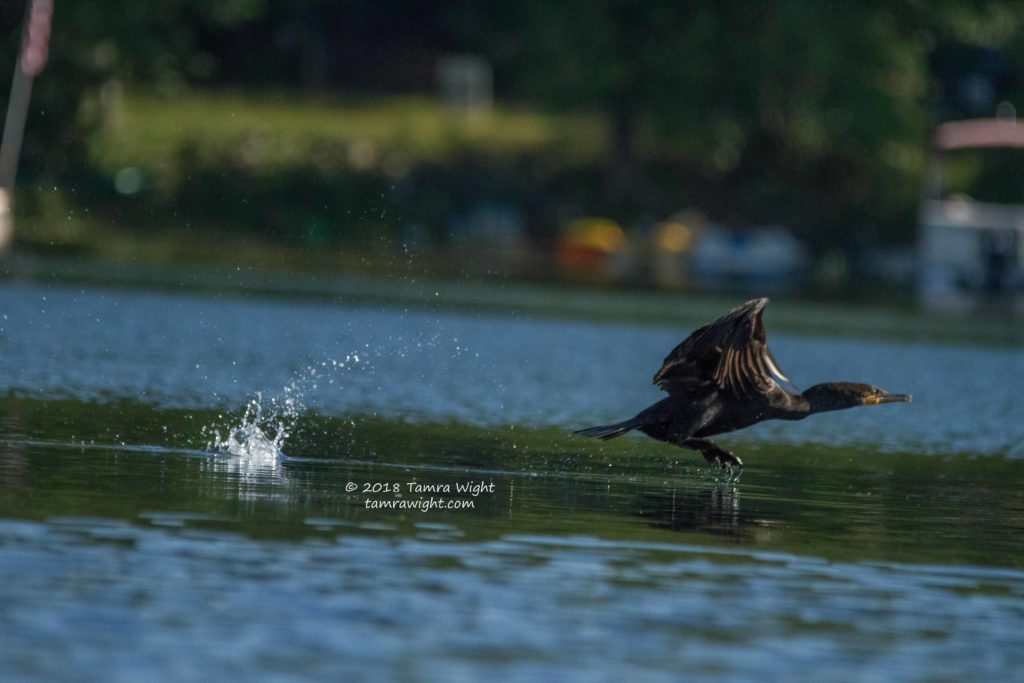 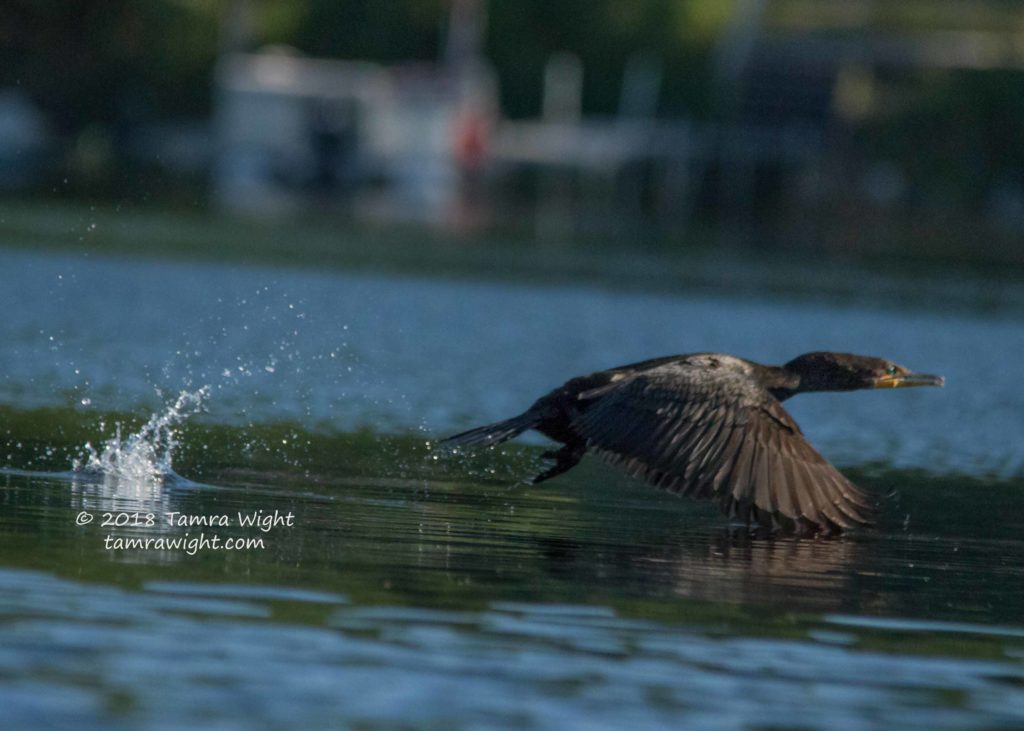 Until finally, it took to the air. 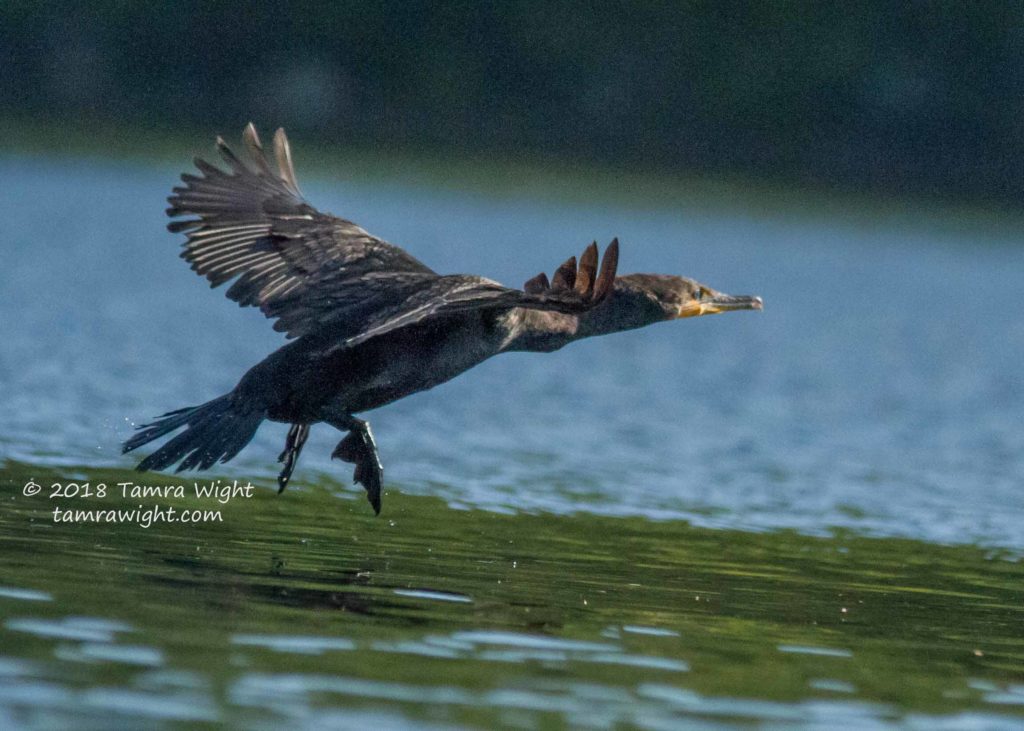 It didn’t go far though, just enough to be out of reach of my camera lens before it landed and went on its way.

I hope to get out again soon, before it leaves us. But if I’m craving photo time with this beautiful bird, I have only to go to our coastline towns where cormorants and loons “hang out” until our lakes are free of ice once again.